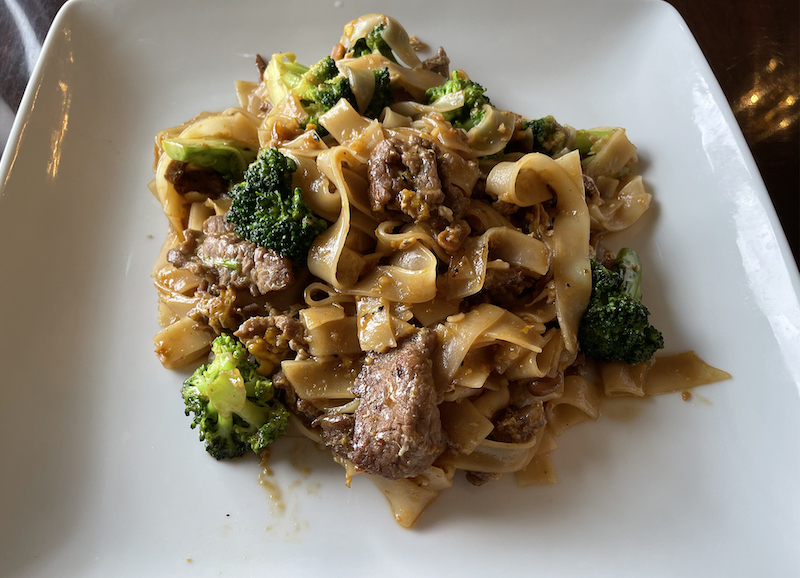 The dish that came out wasn't what we ordered, but it was delicious, so no complaints. Hearty rice noodles were loaded with thin-sliced beef, fresh broccoli, and sweet yellow soybean sauce.

It’s not usually difficult for a restaurant critic to learn about new eateries around our town. Either the owner or chef clues me in with an email, text, or news release, or I’ll hear about it on social media or the Louisville HotBytes forum.

Now and then, though, an appealing new place will fly under the radar until, like Columbus “discovering” America, I stumble into it myself.

So it was the other day when I rolled into Holiday Manor, planning a quick run to Kroger, when I suddenly noticed a bright new storefront sign: “Bahn Thai & M,” it read.

Wait a minute! That’s the space where Thai Cafe, one of my favorite local family-Thai eateries, had been turning out tasty Southeast Asian fare for almost 30 years, making it the oldest surviving Thai spot in town.

Hoping to learn more, I got in touch with my friend Vichan Snow, whose parents, Billy and Chavantee Snow, had owned Thai Cafe since opening day.  “My parents sold it and they are no longer involved,” he said.

After all those years, the Snows deserve a happy retirement, and I hope they’re enjoying it. And my task was clear: Check out the new Thai place, see what I think, and let all of you know.

Bahn Thai & M, the host told us, is connected by ownership with another Bahn Thai restaurant in Fern Creek’s Glenmary Center. The Moundine family joins the Klomklao family in this new property, hence the added “& M.”

The Holiday Manor shop’s menu appears a bit more compact than the Fern Creek property’s bill of fare, but it still offers a good cross-section of Thai cuisine. Thai fare is one of my favorite cuisines. I love its bright, clear flavors that pop, and I’m smitten by its complex aromatics that speak for themselves yet also take inspiration from the cuisines of India to its west and China to its north and east.

Yum. I want to go back right now.

We found the small room almost full for lunch on a Friday. It’s been open since mid-November, and obviously has become popular via word of mouth alone.

“Bahn” means “home” in the national language of Thailand, and the menu offers a range of hearty, home-style Thai dishes. About 60 items include a short list of appetizers and app-size soups that range in price from $4.50 (for fried spring rolls) to $12 (for starter sampler plates).

Entrees are divided into many categories, including Thai dinner salads and noodle soups, fried rice, stir-fried noodles, seafood, Thai curry, and stir-fry entrees. Thirteen vegetarian apps and entrees are listed on a separate page. The entrees all seem reasonably priced, ranging from $12-$13 (for many entrees) to $20-$22 (for many of the eight seafood entrees).

There appeared to be only one server for the entire room, along with a host at the front desk. To her credit, she stayed friendly and welcoming under pressure.

Four steamed vegetable dumplings ($6) were formed into purses in the standard way, filled with bits of tofu, rice noodle, onion and garlic, but then fashioned into tiny bowl-shaped rounds just right to hold a few drops of tangy-hot chili soy sauce.

A bowl of ginger soup ($6) was steaming and aromatic. Fresh halved white mushrooms, strips of onion and julienned ginger, scallions and neatly halved baby corn swam in a delightful sweet, tangy, and deeply ginger-flavored broth. It was profoundly appetizing, and a perfect choice for a chilly winter day.

One of our main dish orders got switched in the kitchen. We had intended to order beef noodle soup ($13), but what we got was a beef noodle dish, apparently sweet soybean noodle pork ($14) but with beef in place of pork.

The server and the host both apologetically offered to exchange it, and I appreciated that; but we didn’t want to wait while our other entree cooled. The unexpected replacement looked good too, so we accepted the substitute. Wide, flat rice noodles, tender but al dente, were coated with a thin, slightly sweet sauce with a few tiny yellow soybeans scattered through it. Thin squares of well-cooked beef and crisp-tender, bright green broccoli florets were arranged in a circle around the dish, with intensely flavored bits of fried garlic on top.

The vegetable basil fried rice ($12) was stunning, a delicious entree very different in style from traditional Chinese fried rice. Every grain was separate, yet they clung together, united by an aromatic, umami-laden sauce, redolent of anise-scented Thai basil. The dish was loaded with bits of meaty pressed tofu, crisp stir-fried squares of onion, whole snow peas, broccoli florets, sliced carrot, baby corn, and garlic. All the flavors and textures united in a simple but wonderful dish.