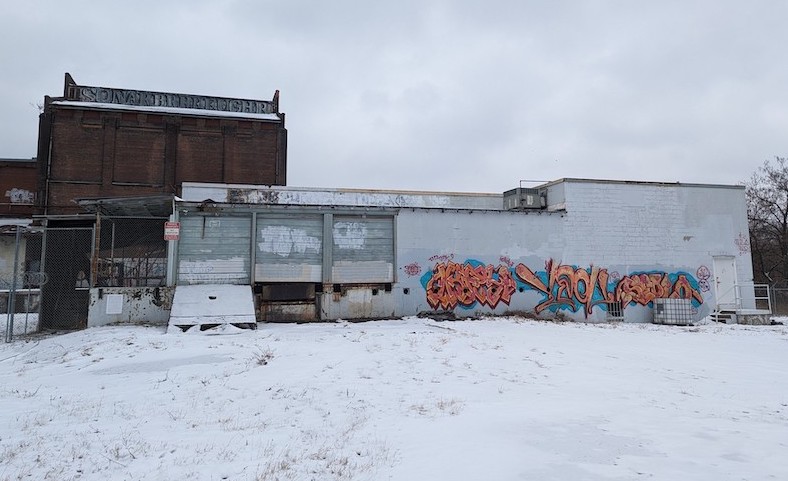 The building that is set to become Trellis Brewing. |. Photo by Kevin Gibson.

A vacant, graffiti-covered building in Smoketown is going to get a new life: Trellis Brewing plans to transform the vacant space and open there by fall 2023.

Located at 827 Logan St., in the shadow of the Merchant’s Ice Tower and the former Schaefer-Mayer Brewery/Frank Fehr Brewery buildings, the space will include a roughly 4,000-square-foot taproom with adjacent brewery, a courtyard that will be overlooked from the taproom, a barrel-aging and blending space and more. The building is being leased from Bluegrass Development, which announced a $70 million Smoketown development project this week for the surrounding property. The brewery project has been in the planning for a year, and full construction permits are expected soon.

The taproom will have a capacity for about 100 people, while the 10-barrel brew system will be able to produce up to 1,000 barrels per year. But the focus of the brewery, according to co-founder Kyle Jahn, will be about community.

“We’re creating a welcoming space,” he told LEO Weekly. “We’ll have something for beer nerds, the beer curious and the non-beer drinkers.”

The taproom will have 22 taps, a bar, standing bar space and tables. While 20 taps will pour craft beer, two will dispense cocktails, wine and other rotating drinks. The brewing program will produce a range of beers, from lagers to IPAs to, as Jahn phrased it, “big ripping stouts.”

He called the brewhouse a “versatile 10-barrel system” that will enable the brewing team to capture the nuances in the grains used, all of which will be Kentucky-grown and will be sourced through South Fork Malthouse, located in Cynthiana, Kentucky. The brewery, along with the barreling and blending program, also will employ a coolship, which is a vessel used for more efficient cooling of wort.

The courtyard will be a focal point of the brewery, offering a family- and dog-friendly place where customers can enjoy a beer and watch kids and pets play. In the process of planning the brewery, co-founders Jahn and Ryan Reed interviewed neighbors to discuss plans — Jahn said the response was overwhelmingly positive.

He also said the building, which apparently has been vacant for at least four decades, once was a cooler for storing eggs.

“They remember there being a strong sulfur smell in the neighborhood from the eggs,” Jahn said.

Future plans will include some form of food service and possibly even a rooftop bar and beer garden sometime down the road, Jahn said. In the meantime, the building will go through a major transformation once the permits are finalized. It will be the first craft brewery to open in the Smoketown neighborhood, and will be located just blocks from Atrium Brewing, which opened in Shelby Park two years ago.

“We are thrilled to bring our vision of a neighborhood brewery to life in Smoketown,” Reed said in a news release. “That vision also includes twenty new jobs for the neighborhood — we can’t wait to share our passion for great beer with the community.”