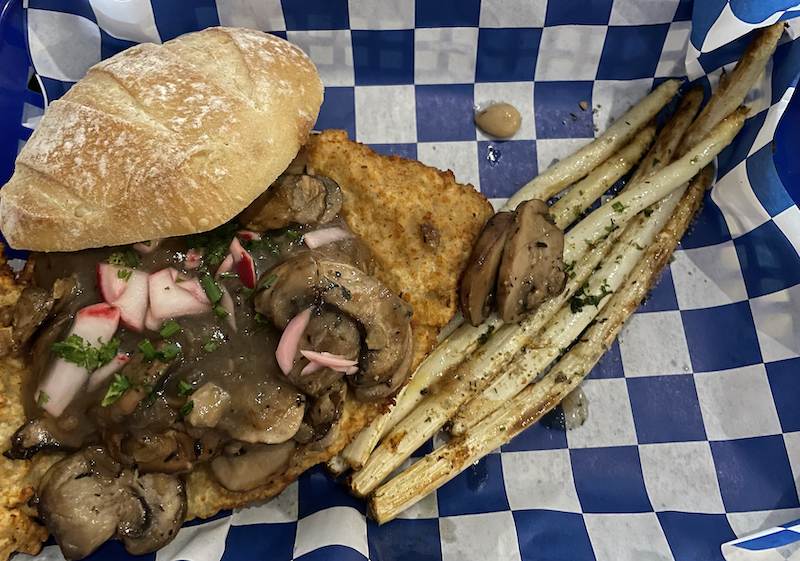 Pork schnitzel, a classic German dish, comes in a variety of styles at Common Haus. It's available as a full course or, pictured, a Jäger Schnitzel sandwich with a side of seasonal white asparagus.

Here’s a funny thing about Louisville and all of us who love our city’s vibrant restaurant scene: We love things the way they are … and we complain about all the ways it could be better.

“We need a Greek restaurant,” we yell. “And a French sidewalk cafe! And where is our real Jewish-style deli!?”

The chant goes on, and to be honest, there’s probably more justification for our wailing than ever. As we go into the third year of the COVID-19 pandemic, the losses to our scene have been brutal.

Sure, it’s not all blackness and the slough of despond. Some great new places have popped up to counter all the losses attributable in full or in part to the pandemic. But still, for example, how will Nulu ever be the same without Harvest, Rye or Decca?

As we near the end of 2022, the pandemic is far from over. At the beginning of this month, Dr. Anthony Fauci said that 300 to 400 Americans continue dying from COVID every day, and fewer than 15% of us have received the latest vaccine booster. That’s a recipe for more trauma, in our lives and, specifically, on the restaurant scene. And it makes our long-time penchant for complaining about what we’re missing a little more real.

Hoping to take the civic temperature, and maybe get some good ideas, I polled the masses on my social media channels. My question was simple: “What’s your holiday wish for local dining? What would we like Santa to bring the local restaurant scene?”

Did I get responses? You bet I did! More than 150 responses, in fact. Some were favorites, repeated often: We really want that Jewish deli. A few were outliers, mentioned only once and, sadly, not likely to happen. I’m looking at you, Facebook friend who wishes we could get an eatery representing the Republic of Georgia.

Let’s take a look at some of the recurring themes. We might as well start with that Jewish-style deli. More people mentioned this than any other single desire, but I don’t really get it myself. Maybe I got deli’d out after living in New York City twice, but I don’t get the affection. Oh, it’s all right for a change of pace, but after getting to know Gotham icons like Katz’s and Sarge’s and Second Avenue Deli (don’t talk to me about Carnegie Deli, it’s for tourists), I’ve been there and done that. I can get a great pastrami on rye at Louisville-accented delis like Stevens & Stevens or Morris Deli, which is fine by me.

There’s a lot of hunger for serious Greek cuisine in this town, and people in the know aren’t just talking about gyros and some approximation of baklava. We’re looking for a serious Greek taverna with a range of traditional dishes ranging from souvlaki (grilled lamb) to avgolemono soup to saganaki (yes, the notorious flaming cheese, opa!), with a tumbler of pine-scented retsina wine to wash it down. As a practical matter, though, Greek cuisine has never been able to gain traction in Louisville. Perhaps Greek immigrant Nick Mastoras had the right idea when he named his multigenerational family business Masterson’s and focused the business on familiar American fare.

One food-loving friend who enjoys dining well called for more upscale world food, along the lines of the excellent Italian fare we have at Volare and Anoosh Shariat’s international touch at Anoosh Bistro: “Fine dining in pretty much any cuisine that we don’t currently have locally: Japanese, Thai, Indian, Russian, Turkish, German.” That makes sense to me. The recent closing of Gasthaus took away our solitary sit-down, fine-dining German experience, although we mustn’t overlook Common Haus in Jeffersonville for its casual German-style fare and impressive German beers and other good things to eat and drink.

Rollin’ on the river

One friend made a very strong point: With a few good exceptions up the river (all right, River House, Captain’s Quarters and the Pine Room) Louisville’s waterfront development is a great park, playground and concert venue, but we’re falling way behind our Jeffersonville neighbors across the Ohio in downtown waterfront restaurants. “We must have a restaurant on the waterfront downtown,” they said. “Within walking distance of the hotels, a la Captain’s Quarters or a docked barge.” Yep, I can’t quibble with this. Jeff has a ton of bars and eateries along its downtown riverfront. We’ve got … Joe’s Crab Shack?

There’s a lot of sentiment for “meat and three” restaurants. That concept isn’t widespread here by that name, although in my opinion this Nashville tradition — soul food eateries where one chooses a meat course and then picks three sides (plus cornbread and sweet tea) — is already widespread in practice if not in name. The pandemic hasn’t been kind to West End sit-down restaurants, but just about any local soul-food spot will give you a similar experience of tasty soul food and sides. Or stay downtown and visit Dasha Barbour’s at 217 E. Main St. for a sample.

The ideas just kept on coming, all sounding delicious although some perhaps more practical than others: More farm-to-table dining. A restaurant with First Nations cuisine and Indigenous cuisine like Minneapolis’ Sioux Chef. Some seafood-boil spots distinct from the wave of Asian crab boils. An oyster bar! Turkish döner kebab! In-and-Out Burger! The list goes on, and you’ve probably got your own ideas. Tell us about them.