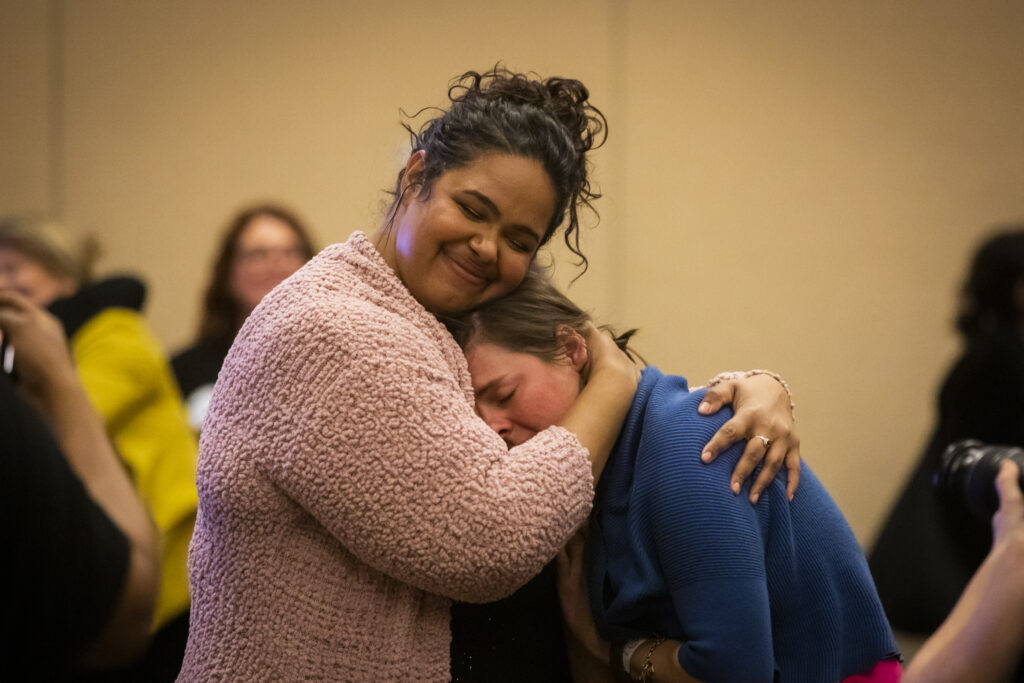 A Kentuckian seeking an abortion now must travel to another state for it, with Illinois being the nearest where the procedure is accessible with few or no restrictions.

Virginia has some access as well, though less than Illinois.

This is true despite the defeat of the anti-abortion Amendment 2, which would have specified there’s no right to an abortion in Kentucky’s Constitution.

Abortion in Kentucky remains outlawed in almost all cases while the state Supreme Court considers whether to block enforcement of state laws banning the procedure.

The high court, which heard arguments in the case on Nov. 15, must decide whether to uphold an injunction that had briefly reinstated access to abortion in Kentucky.

If the justices grant the injunction sought by the Kentucky branch of the American Civil Liberties Union, the decision would allow EMW Women’s Surgical Center and Planned Parenthood in Louisville to resume abortion services at 15 weeks of pregnancy as the case is litigated.

Parenthood in Louisville to resume abortion services at 15 weeks of pregnancy as the case is litigated.

No matter the outcome of the injunction request, larger questions of the abortion ban’s constitutionality must make their way through the courts.

That could be a lengthy process ranging from months to years, according to Jackie McGranahan, a policy strategist with the ACLU of Kentucky.

“We will continue working in the legislature to protect Kentuckians’ rights and to push for equitable access to health care, to improve Kentucky’s dismal maternal health outcomes, particularly for pregnant Kentuckians of color, who faced maternal mortality rates nearly three times that of their white peers,” said McGranahan. “But we are very hopeful.”

“Not a partisan issue”

Rachel Sweet, who ran the successful Protect Kentucky Access campaign, has said the Nov. 8 vote shows abortion “is not a partisan issue for most voters in Kentucky.”

It’s unclear how the legislature will respond.

Senate President Robert Stivers told a gathering in Northern Kentucky that “it’s hard to tell” if voters who opposed Amendment 2 want exceptions in the case of rape and incest, adding that his caucus would “discuss the issue,” Jack Brammer reported.

At the Nov. 15 hearing, Keller, who has practiced as a registered nurse, said Kentucky’s abortion ban forces physicians to consult lawyers and risk managers while treating an emergency involving a pregnant patient.

“If there’s a man bleeding out in the ER, he has all the self-determination in the world, and most women do too, unless they’re in a state of pregnancy, and then suddenly there is no self-determination. And then the physician is trying to get ahold of the attorney general.”

After the Supreme Court overturned the federal right to abortion last summer, allowing Kentucky’s “trigger law” to take effect, the Kentucky chapter of the American College of Obstetricians and Gynecologists (ACOG), warned that the “restrictive state laws” were putting “our patients’ care at risk” and would “ultimately harm women in the state.”

KY ACOG issued a statement after the election promising they are “committed to working with lawmakers and healthcare experts to continue the work of providing clarity, common sense, and compassion in Kentucky’s statutes and policies.”

KY ACOG issued a statement after the election promising they are “committed to working with lawmakers and healthcare experts to continue the work of providing clarity, common sense, and compassion in Kentucky’s statutes and policies.”

Three hundred Kentucky health care providers signed a letter ahead of the vote asking people to  oppose Amendment 2 because  “a total ban on abortion will put patients lives at risk.”

As Kentuckians await the Supreme Court’s ruling, “we have anxiousness going on,” said Ana’Necia Williams, a licensed clinical social worker whose  Louisville practice, Momology, primarily addresses traumas and healing. She said she was not surprised by Amendment 2’s failure, but sees it as just the jumping off point for further pro-choice advocacy and policy work.

“I think a lot of people feel overwhelmed with: ‘I still don’t even understand what is happening here but I’m still left to figure things out if I’m impacted by it.” In the coming months and year, she said, she’ll focus more on understanding policy and how the current restrictions impact people who need abortions, from transportation out of state to losing work.

A pro-choice win on election night

The uncertainty about what comes next contrasts with election night elation among advocates for reproductive rights after voters rejected the anti-abortion amendment.

Cheers, tears, and even some twerking marked the moment in the Galt House’s Grand Ballroom on Election Night as the ACLU of Kentucky declared Amendment 2’s defeat.

The amendment, which proposed writing into the state constitution that there was no right to abortion, failed by about 66,598 votes. Lexington and Louisville, the most populous areas in Kentucky, voted against the amendment, along with a band of counties between them but most other counties voted in favor of the amendment.

The amendment read: “Are you in favor of amending the Constitution of Kentucky by creating a new Section of the Constitution to be numbered Section 26A to state as follows: To protect human life, nothing in this Constitution shall be construed to secure or protect a right to abortion or require the funding of abortion?”

Alexa Hughes, a Louisville full-spectrum doula and founder of Granny’s Birth Initiative who partnered with Protect Kentucky Access during the campaign, said that Amendment 2 would have worsened the state’s already dismal maternal mortality rates.

“Abortion is medical support and it needs to be recognized as such” said Hughes, whose work includes being an abortion doula–talking through options with clients, escorting them to a clinic, and more.

“I know there may be many situations out there that even [I] myself fight with internally, fight with morally,” she said. “But at the end of the day, I know one thing I’m always sure about is: I would never want somebody to enforce carrying a child.”

“This will not stall the prolife movement”

The Yes for Life Alliance released a statement the morning after the election calling the opposition to the amendment “radical, out-of-state activists” who “spent millions of dollars to confuse Kentuckians about the Yes for Life amendment.”

“But this will not stall the prolife movement,” the statement continued. “Throughout this campaign, we have met inspirational people of faith and conscience who are committed to protecting every person’s right to life and supporting women and families in need. Encouraged by these Kentuckians, we will continue our efforts to protect our prolife laws and safeguard the dignity of every human person.”

Yes for Life did not return a request for an interview from the Kentucky Lantern.

Attorney General Daniel Cameron issued a statement after the vote asserting that the “disappointing” outcome “does not change our belief that there is no right to abortion hidden in the Kentucky Constitution.”

What was said when the case was argued before the state Supreme Court?

On Nov. 15, the attorney general’s office and the ACLU of Kentucky argued before the Kentucky Supreme Court over Kentucky’s abortion bans. The ACLU asked that the bans be blocked while the court examines the issue.

In comments to the bench, Attorney Matthew Kuhn for the AG’s office asked the judges “not to create the Kentucky version of Roe vs. Wade.”

“Our constitution is neutral on the issue of abortion,” Kuhn argued. “Our Constitution is not pro choice. And it’s not pro life either.” Because of that, he said, the decisions about it should be decided by the General Assembly.

Justice Lisabeth Hughes appeared to take issue with a request that the vote on Amendment 2 not be considered in the case.

“It strikes me that a ballot initiative is the purest form of democracy,” she said. “It is the people themselves speaking, not through someone else with whose views they may completely agree, may completely disagree, may partially agree. But it’s a discrete question placed before the voters…the vote is the purest form of democracy. Why are you suggesting that it has no impact on the issues before us today?”

“I think that’s trying to strip us of our power again, because they saw that the vote and people turned up and really let them know that this is not okay,” Williams said. “So I think it’s a method…to not count the voters, silencing individuals. So, you’re really causing more harm, especially because a lot of it does impact those marginalized groups.”

Kuhn’s reasoning for the request was this: “The effect of the Second Amendment, if it had been adopted, would have been to make explicit what we argued was already implicit. And so what the Amendment did was it took the explicit issue off the table. And so the court then is required to figure out whether our constitution implicitly protects abortion.”

Counsel for ACLU Heather Gatnarek argued that abortion access falls under the right to privacy, which “has been consistently recognized as an integral part of the guarantee of liberty in our 1891 constitution.”

ACLU’s McGranahan reiterated this point when speaking with the Kentucky Lantern later.

“I don’t know what the results are going to be with the argument that happened on the 15th,” she said. “But … we do have strong privacy protections at play, and regardless of whether the word ‘abortion’ is in the Constitution, we have to remember that my bodily autonomy is protected by my state’s constitution. It’s protected by the federal constitution.”

The ACLU’s McGranahan  told the Kentucky Lantern that part of the path forward is fighting to make Kentucky a safer place to have a baby for those who want that.

“Right now in Kentucky, we have dismal maternal health outcomes,” McGranahan said. “They are so bad.”

Pregnancy is especially dangerous for Black Americans, who are three times more likely to die from pregnancy than their white counterparts. White women are more likely to have access to good prenatal care than Native, Black, Pacific Islander, Asian and Hispanic women.