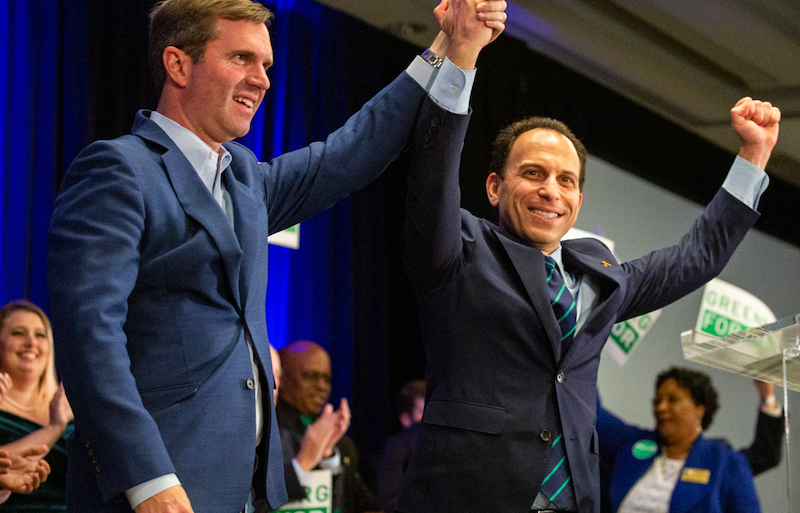 “I’m excited to work with each and every one of you here tonight and everyone across the entire city and state to move Louisville forward,” Greenberg said after taking the stage around 10 p.m. at his campaign’s watch party at the Galt House Hotel in downtown Louisville.

Greenberg was introduced to the crowd by Kentucky Gov. Andy Beshear, who spoke about his own Louisville roots, and praised the city’s selection for mayor.

“I love this city, it’s important to me, and that’s why I’m thrilled that you have elected an incredible mayor,” Beshear said.

Nearly a mile away at the Jefferson County Republican Party watch party, Dieruf took the stage around the same time to concede.

“Unfortunately, it’s counted in votes, it’s not counted in experience. So we have to call it tonight,” said Dieruf, the current mayor of Jeffersontown, in brief remarks.

According to the Jefferson County Clerk’s Office’s unofficial results, Greenberg secured 143,717 votes while Dieruf pulled in 128,674 with all of the county’s 673 precincts reporting.

Greenberg made public safety the cornerstone of his campaign, saying he would “fully” fund LMPD. In an effort to get illegal guns off the street, Greenberg said he would circumvent a state law requiring that confiscated guns be sold at auction by ordering LMPD to render firearms inoperable before turning them in to the Kentucky State Police.

He also promoted universal pre-K, pledged to build at least 15,000 affordable housing units and said he would boost transparency.

The former developer survived a Feb. 14 assassination attempt in which Quintez Brown, an activist and former Courier Journal intern and columnist, allegedly walked into Greenberg’s Butchertown campaign office and fired shots from a handgun.

Greenberg said one of the bullets was so close to hitting him that it passed through his shirt and sweater. After Brown’s $100,000 bond was paid by the Louisville Community Bail Fund, Greenberg decried the city’s criminal justice system as “clearly broken.”

Brown has since been taken into federal custody on additional charges related to the shooting.

Greenberg’s campaign would highlight the shooting in a campaign ad and the candidate repeatedly turned to the assassination attempt to underscore his public safety message.

Dieruf’s campaign leaned on his experience as the longtime mayor of Jeffersontown, saying he would replicate the prosperity and safety of his suburb in the larger metro area if elected. Like Greenberg, he said public safety was his number one priority, and that he believed that police officers who had left the Louisville Metro Police Department would rejoin if he was mayor.

Opponents of Greenberg were quick to label him “Fischer 2.0” — an insinuation that a Greenberg administration would simply be a continuation of Greg Fischer’s 12 years in office. Dieruf would embrace that line of argument, calling Greenberg “Fischer’s hand-picked successor.”

In his victory speech, McGarvey — who shared an election night party with Greenberg at the Galt House — said that no matter which party controls Congress after the midterms, it’s important to continue to stay focused on working-class issues.

Yarmuth, who introduced McGarvey at the watch party, said: “Today Louisville elected a true champion to represent us in Congress.”

In a press release announcing that he conceded, Ray congratulated McGarvey, but also took a few shots at Democrats.

“First, I would like to congratulate my opponent, Morgan McGarvey, who ran a good and fair race,” Ray said. “I would like to thank him for his tenured service in Frankfort. I hope he will recognize the amount of support I had and the trends within this country prove that the recessionary policies of this White House Administration are hurting our community and that will guide him while making decisions in Washington.”

The Associated Press called the race for Paul at 7:14 p.m.

“I believe we are all truly better for his candidacy and his campaign,” McGarvey said.