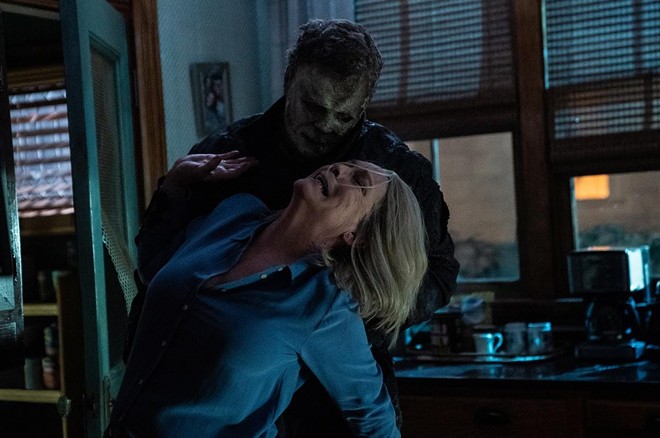 Never shake hands immediately after walking out of a public restroom. Never eat food past its expiration date. Never pick fights on the Internet.

And yet, with the premiere of “Halloween Ends,” the 13th film in this 44-year-old franchise, I found myself doing just that—arguing with friends and other movie fans online—because of the hate and vitriol being spewed at what allegedly should be the final appearance of Michael Myers and Laurie Strode.

Here’s the deal, and I’m going to give it to you straight: “Halloween Ends” is not the best movie in this forever franchise, nor is it the worst. That honor belongs to 2002’s “Halloween: Resurrection.”

Should we be at all surprised that four decades later, there’s really not much more that can be said or shown or imagined about a serial killing shape and the resilient babysitter who proves to be his undoing?

Should we not have known back in 2018 when David Gordon Green and Danny McBride released the first of their planned final trilogy, which also included 2021’s superior “Halloween Kills,” that six hours might be a little much time to properly bid these characters goodbye?

Are we not intelligent folks? Are we not wise enough to just sit back and appreciate that Green, McBride and their creative cabal at least tried to do something different and outside the box with “Halloween Ends”?

After all, isn’t that what any movie fan should hope for? The chance to see a director, writers and actors take chances, to push back against conventional thinking, to swing big for the fences, even if the effort ultimately falls short of greatness?

“Halloween Ends” time jumps four years from the end of “Halloween Kills,” and immediately introduces a new character, Corey (Rohan Campbell), who has his own Halloween holiday nightmare happen without any involvement from Michael Myers, which sets the stage for all that follows. Some of it works, a lot of it doesn’t (do we really need to sit with Laurie (Jamie Lee Curtis) as she thinks out loud in her head about the memoir she’s writing), but at least it’s not just 120 minutes of stalk-and-slash like we’ve seen 12 times before.

Truth be told, Green, McBride & Co. likely overreached and should have tempered their ambitions to two films instead of three, but who am I to criticize them when they likely got offered a shit-ton of money to realize their vision.

Again, it would have been so much easier for them to simply go back to what’s worked since 1978 and have Michael chasing Laurie and killing residents of Haddonfield indiscriminately for two hours. Would that have satiated fans? Who knows. And, honestly, who cares.

We created this monster out of love for these characters, and yet how quickly we are to turn and bare our teeth just because we weren’t expecting to watch a movie that tries to analyze the nature of evil and examine how it can infect and corrupt and inspire others to do awful things.

Maybe instead of bitching online, we should all go back and rewatch John Carpenter’s original one more time, to say a small blessing of thanks.

“Halloween” may be over, and personally I honestly hope that this is it for this series, but we should forever be grateful for the memories and magical moments that these movies have brought us over so, so many years.