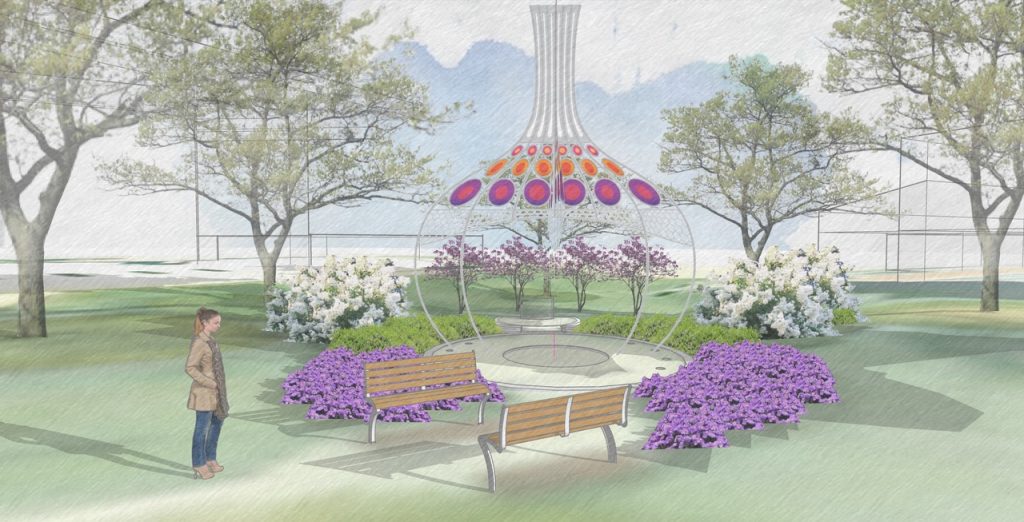 This article is part of a series funded by Great Meadows Foundation.

Legacy is a tricky business. How a person is remembered is difficult to plan. Fortunately for the late glass artist Stephen Rolfe Powell, his public legacy is in his art and former students. Soon there will be a memorial that celebrates his place in those worlds.

Powell, who died in 2019 at 67 years old, was a world-renowned glassblower nicknamed the “Godfather of Kentucky Glass.” His two careers — professor of art and artist — joined paths when he was hired to teach ceramics and sculpture at his alma mater Centre College in Danville, Kentucky, in 1983. He soon revisited his interest in glass and founded the hot glass program there two years later. 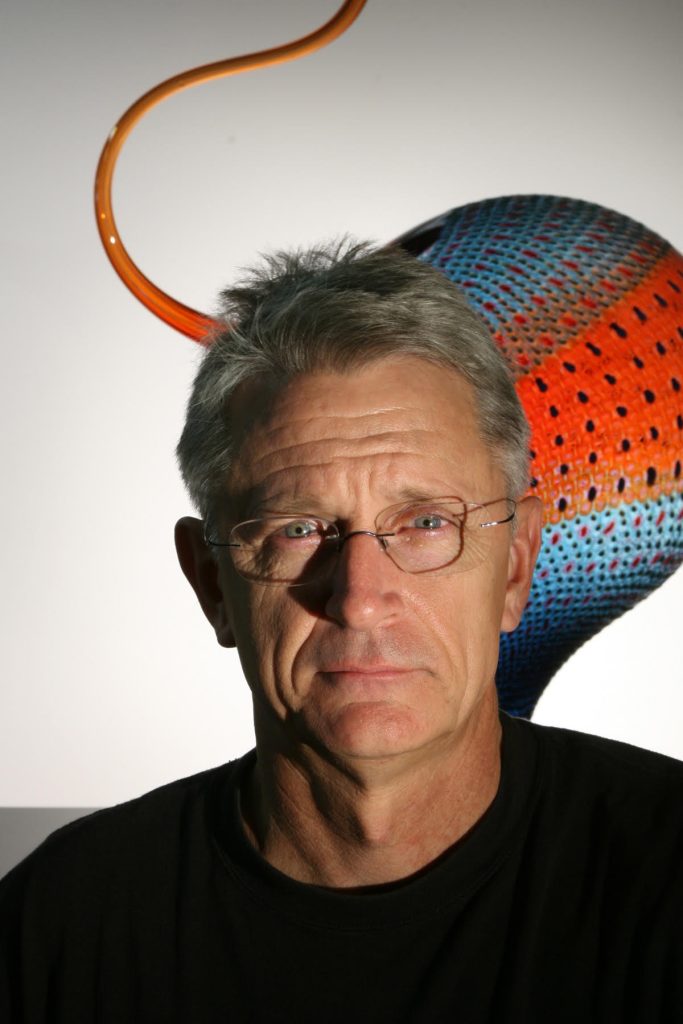 His signature vessels incorporated colorful Italian murrini beads (as many as 3,000), resulting in a Color Field-style of art usually found in painting. Powell was well known for his love of light and color inherent in the medium. People took notice of his work, with their saucy three-word titles and large size, beginning in 1990 at a Glass Art Society annual conference. His five major series evolved, from Teasers and Whackos to Screamers, Echoes and Zoomers. The shapes changed but not the abundant color.

A glassblower is like an orchestra conductor. It takes a team to create, especially with pieces the size of Powell’s, with all eyes waiting for the next signal. One of his many gifts was being a good team leader of his glass crews. He was quick to acknowledge their roles in creating his art.

Watching Powell and his assistants work was theater at its best, complete with oohs, aahs and applause. It was such an event that he was asked to demonstrate at the 2002 Winter Olympics in Salt Lake City, Utah. Two local public sites to see his art are at the Speed Art Museum and KMAC Museum.

Teaching awards include back-to-back Kentucky Teacher of the Year in 1999 and 2000, the Acorn Award by the Kentucky Council on Post-Secondary Education in 2004 and the Distinguished Educator award from the James Renwick Alliance in Washington, D.C. in 2012. He also received the Kentucky Governor’s Awards in the Arts in 2010.

Powell put Centre on the map as an important location to learn glassblowing. One of his first assistants, Patrick Martin, currently leads the hot glass program there. He helped build the original studio Powell designed after inaugurating the college’s glass program.

Although Powell lived in Danville, his presence looms large in Louisville. That’s in part due to his former assistants who live here, such as Brook F. White Jr., owner of Flame Run Hotshop and Gallery, and Ché Rhodes, head of the glass program at UofL’s Hite Institute of Art and Design. They are two of the many influencing future generations of glass artists by passing on the gospel according to Steve.

White spent a decade as an assistant, starting at 19 years old. “Those were my formative years and when Steve’s career was taking off. It was an old-world internship, a highlight reel of my life of stories and people I got to meet. Watching Steve working with gallery owners, [that’s the] professional part of it. I learned what it takes to keep a glass studio running.” Flame Run, the name of White’s studio, is a reference to his time at Centre (The Flame Run is a clothes-optional tradition where students run around a statue called “The Flame”)

After getting the family’s blessing for some type of memorial (Powell was cremated, so there isn’t a tombstone or other place of remembrance and reflection), he started brainstorming with colleagues. He said that while the overall concept was his, “it’s been a team effort from day one. This is what Steve taught me to do. I wanted to do one last Steve project in Steve style. I realized about a year ago that [the memorial] is what I’m supposed to do.”

The funding came from multiple sources including the Corning Incorporated Foundation and, most importantly, his former students and assistants. White stated that “Steve affected a lot of people,” especially those who worked with him. Construction on the memorial started in April of this year.

The memorial consists of a 25 feet tall by 20 feet wide sculpture that people can walk through, three benches, garden, walking path and an amphitheater that will be used as an outdoor classroom. White was able to pick the location he wanted on Centre’s campus near Grant Hall in the Norton Center for the Arts. The main sculpture is in place now with work on the surrounding components continuing on-site. It will be dedicated at Centre’s Homecoming on Oct. 15.

White and the Flame Run team made the 48 glass discs resembling murrini beads, an integral part of the memorial, in three sizes and six colors, including purple, Powell’s favorite color. The Louisville sculptor Dave Caudill was brought in to fabricate the stainless-steel ribs holding the discs in place. The overall structure is in the shape of one of Powell’s famous “Teaser” vessels. In the floor is a circular container of glass shards from some of his designs that didn’t make it to finished projects.

Paul Nelson, another one of Powell’s former assistants, designed the metal benches that are in the garden. White asked him to do it because “we’ve been buddies for over 30 years,” he said. “He’s a jack of all trades and was on a team of Steve’s.” Together, they came up with the concept of the benches symbolizing Centre College’s three centuries, including one dedicated to the Class of 2020, a major fundraiser. 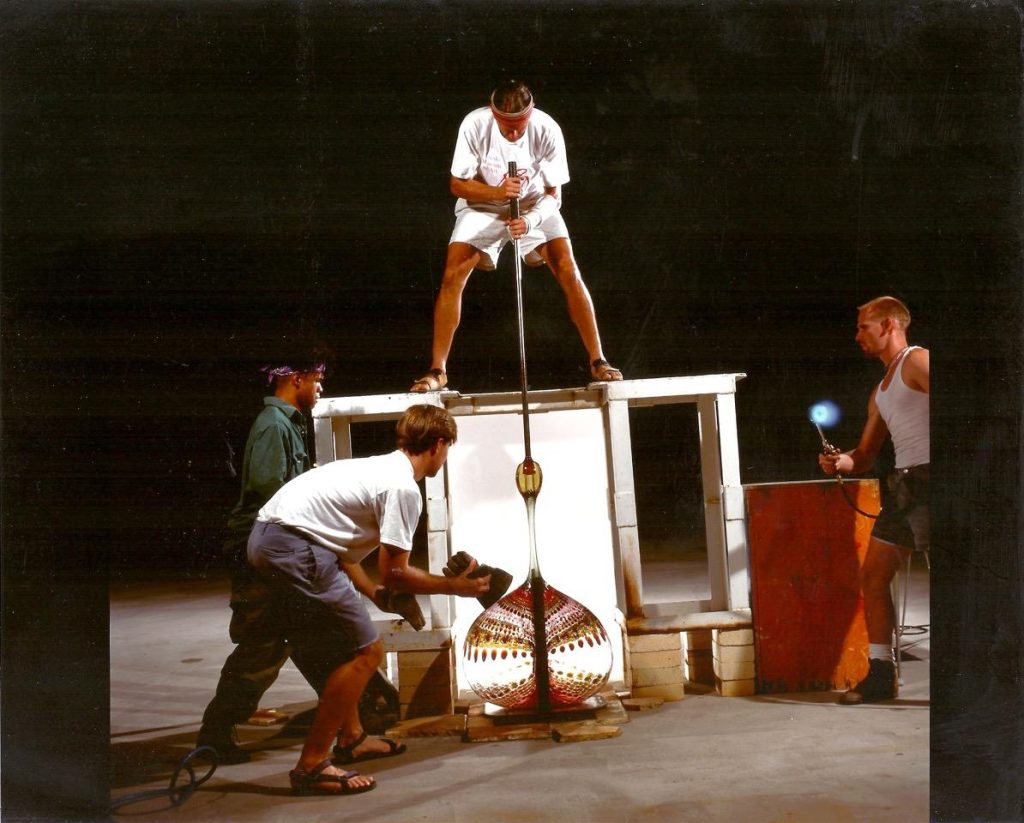 As if he was not busy enough, White is also the curator of “The Power of Color: A Stephen Rolfe Powell Retrospective” at the Art Center of the Bluegrass in Danville (Powell also had a mid-career retrospective exhibition and book reveal at KMAC Museum in 2007). Toward the end of his life, Powell and the Art Center were collaborating on a show of his glass which would have included pieces from his personal collection. He was working on a new series he titled “Zoomers” when he died. Two of the five feet tall panels, personally chosen by him, are now in the organization’s permanent collection as well as in the retrospective.

The Art Center contacted White for help finishing organizing the exhibition. The 26 pieces span the four decades of Powell’s work, including some of his early pieces of ceramics. The show runs through Oct. 29.

Although he did not work on the memorial, Ché Rhodes is another important part of the Powell legacy. He met him after he enrolled in Centre and chose art as his major (Rhodes, White and Nelson worked together in 1992-94).

“You know, I guess it never seemed Steve tried to take people under his wing. But if you had a beacon of promise, he was there,” he said. “When I take a step back, over the years, … I realized he was an amazing person always causing things to happen. No one influenced my life, the path of my life and career, quite like Steve. He was really good at being inclusive and accepting the world view. I think about that a lot.” 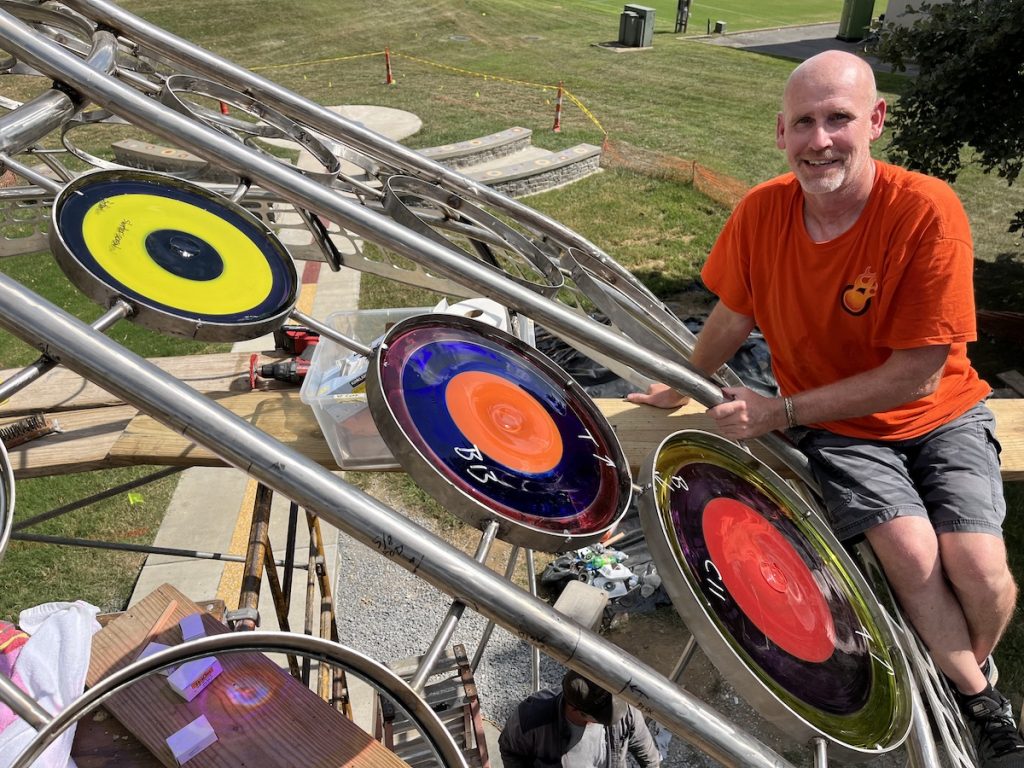 Rhodes followed Powell into teaching and founded UofL’s glass program in 2005. “More recently [I’ve] felt a great kinship with him. As I’ve gotten older, I’ve tried to take a page out of his book. There are times I try to be [like him] as an instructor, live up to his values. What would Steve do?”

He recently met up with one of the most important glass artists living today, Lino Tagliapietra (another close friend of Powell’s), and wanted to bring a class with him. “Steve would have, of course, brought the whole class,” Rhodes said.

The next generation of glass artists influenced by Powell via Rhodes is a lengthy list. It includes SaraBeth Post of Pittsburgh, Pa., who after graduating from UofL was a fellow at the Penland School of Craft in North Carolina; Jackson Hawkins, assistant professor of glass at Southern Illinois University in Carbondale; and Whitney Olsen of Louisville, who also continued her studies at Penland as well as the Pilchuck Glass School near Seattle.

Rhodes also honors Powell’s legacy in a specific way — one of his students is Oliver Powell, Steve’s son. “It’s amazing having Oliver in class. It’s much more meaningful, more purposeful. I’ve handled this canon of glass art for 30 years and now I’m handing this back to his son.”

“If I were known for anything,” Powell once stated, “I would hope it would be for the color, the color choices, and what the color does.” He is remembered by many for much, much more.