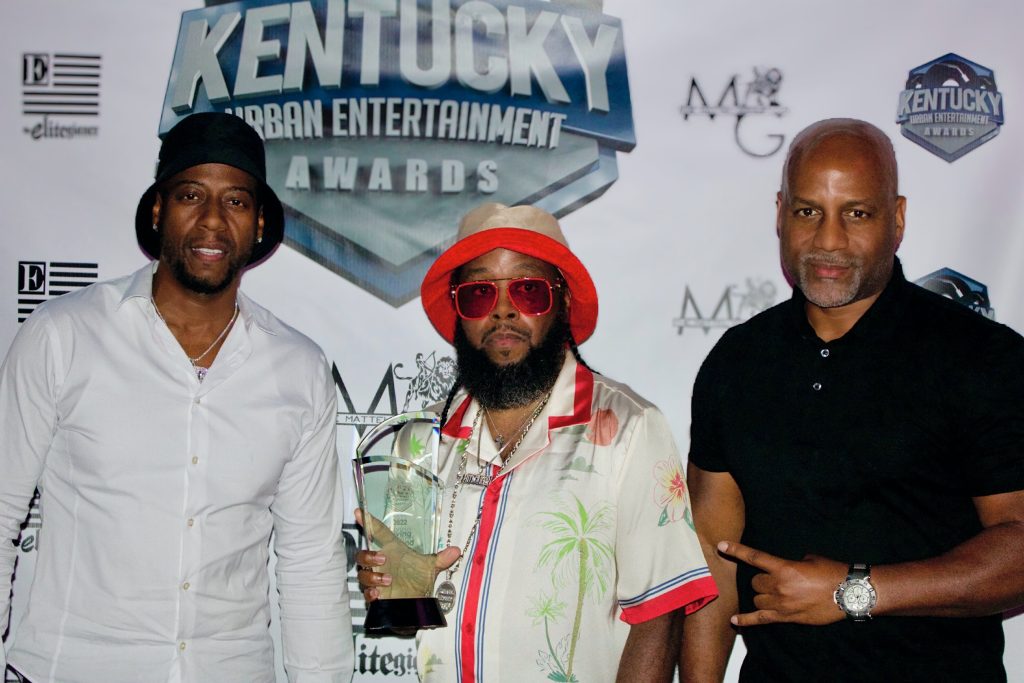 B96.5 afternoon radio host Bella Rae has a clear picture of her audience. While she entertains them over the airwaves, she doesn’t physically see them in those moments. But when she closes her eyes, she imagines: “My crowd of people, there’s guys, there’s LGBTQ, there’s girls, like, they are the most fun crowd of people that you could ever meet. If they’re having a bad day, they know we gonna pick it up. They know I’m gonna say some off-the-wall stuff. They know I’m gonna keep it real. Because I love them.”

It’s this innate understanding of who her listeners are and the responsibility she places on herself to lift them up and bring them joy that earned her “On Air Personality of the Year” at this year’s Kentucky Urban Entertainment Awards this year.

The awards were held at C2 Event Venue & Conference Center on Breckinridge St. in Louisville on Saturday, August 20. By all accounts, it was the most electric awards program in KUEA’s 6-year run (it was established in 2016).

The Kentucky Urban Entertainment Awards is a product of the statewide DJ coalition, The ELITEgiance. DJ Slikk, the CEO of The ELITEgiance, explained why the program was established.

“There are other award shows, but people from our realm of entertainment, from the urban community, were getting overlooked. So instead of us begging to be involved with somebody else’s event, we decided to do our own,” he said.

Awards programs such as the regional Appalachian Arts & Entertainment Awards and the state Governer’s Awards in the Arts, do not have a history of observing and assessing urban arts in any meaningful way, although one of last year’s recipients of the Governer’s Award was folk, blues and gospel artist Martha Redbone. For those who have the curiosity and tenacity to inquire about past award recipients of these two programs, Google searches will reveal a grave inequity that can be described as negligence borne of structural racism.

As much as the KUEA is a response to the cultural ignorance that has kept Black entertainers out of the majority-controlled spotlight, there is more to the story. KUEA is not a funeral. It is a celebration of the very best of the culture. The spirit of the event is to look forward and build.

“The vibe was great. It gave me a B.E.T. awards feeling, just on a smaller scale,” said Stephon Dupree, CEO of Dupree Entertainment Group. Dupree made the drive from Lexington for the event.

He Brought The Laughs

Lexington was well-represented at the event by Larry Starks, who won “Comedian of the Year.” Starks got his start less than twelve years ago when he was one of the opening acts for a headliner at Club Bananas in Lexington. His set went well, and he’s grown continually since.

“At some point, I realized that I have a voice. I don’t remember exactly when that was because I was so immersed. Working with Adele Givens was a milestone. She took me on the road with her, and that was my first time traveling to do comedy, with the queen of comedy herself,” he recalled. “The first show was in Oakland, California. I had never been to California before. It opened up a whole new world to me.”

Starks does shows four or five times a month and is seeing more opportunities to perform come his way. For announcements about his upcoming shows, click HERE.

The ELITEgiance President DJ Empty Beats spoke of a crucial strategy that drives not just the DJ coalition but the awards program: “I think what makes our award show so amazing is we’re not only focused on Louisville but the whole state of Kentucky. If you look at large cities like Atlanta, Houston, New York, and Los Angeles, they have huge audiences. To contend with them we need to harness the interest of all of Kentucky and cover every region of our state,” he said.

While the program has a view of the entire state, Louisville is undoubtedly the center of it all.

“[This] awards show is a beacon to other areas of Kentucky to be a home of recognition and resources. Unfortunately, in my opinion, there isn’t enough infrastructure to spread the awareness, but hopefully one day that will change. I do think with every show, every year, we build a little more on making that awareness available. It would be nice to see artists from more cities within our state build undeniable momentum to be recognized,” said Jon Woo, winner of the coveted “Grinder of the Year” trophy.

Known for his dedication as a music manager (to Marzz and Suzie Tatyana) he also seeks to nurture performing artists in his home city through his quarterly networking event Producer Corner.

“Winning my award was unexpected but extremely appreciated. I have been working very hard and am humbled that it didn’t go unnoticed,” he said.

King of the Evening

Other highlights of the awards ceremony included a surprise moment, when R&B artist Marzz, who herself won “R&B Artist of the Year,” sang ‘Countless Times’ to honor Dorian Washington, known best as King Dorian, who was given one of three “Living Legend Awards.”

“That was amazing. Marzz is one of my favorite people outside of my wife, my family and my kids. It was special. Probably one of the best moments of my life,” said Washington.

It would be fair to say that Washington got a lot of love at KUEA. Lester Pace, Senior Vice President of Radio Promotions at RocNation, and Arnold Taylor, founder of South Coast Music Group both showed up to recognize him.

Washington, who is President of the label Hitmaker Music Group, has had an instrumental hand in the success of music created by Hotboii, Roddy Rich, Flo Rida, Whoppa Wit Da Choppa, and recently the sensational ‘F.N.F. (Let’s Go)’ by Hitkidd and Glorilla.

“What I love most is breaking artists and showing the world what they can do. Like the ‘F.N.F.’ record. That’s the most fun I had all year. That’s the biggest song in the country,” he said.

Dupree noted that the Jumbotron video compilations favored the best-known winners. “I feel like it would have been dope if they had put as much into videos about all the winners as they did for Dorian. Dorian had shoutouts from Ray J and a couple of other celebrities. What if they had a little music video playing as each winner was walking up or a presentation about the person? There were a lot of people that got awards that I’ve never heard of,” he said.

One of the Greats

The highest award of the night, the “Static Major Award,” is given to someone from Kentucky who has broken through on a national scale. This year, the award went to gospel singer Jason Clayborn. The award is named for Static Major, a singer, songwriter, and record producer from Louisville who made significant contributions to the careers of Aaliyah, Ginuwine, Pretty Ricky, and Destiny’s Child. Since his death in 2008, he has been recognized in songs by Drake and Jack Harlow.

Clayborn was not able to attend the awards as he was in Houston, but his his mother Jocelyn Clayborn – a singer and songwriter well-known in Louisville for her positive impact on the music scene – acc​​epted the award on his behalf. Clayborn sent a video acceptance speech that aired on the Jumbotron.

Studio of the Year

The award for “Studio of the Year” came at an interesting time, given that 400 Recording had been under new ownership for less than a month when the award was given.

B Simm, a rapper and songwriter signed to Ethika Music who splits time between Los Angeles and Louisville, was around when the studio first opened in 2017.

“I didn’t have anything to do when the pandemic started, so I went down and actually managed 400. At the time Nick, who bought 400 this summer, was the head engineer. I think it starts with the engineers, which is true for any studio. The fact that 400 has so many engineers that are available pretty much 24/7, as well as the fact that they have three recording rooms, which a lot of studios don’t have, are two big factors in their success,” he said.

The 400 legacy and reputation will only flourish further now that Nick Meredith has taken over. R&B artist James Savage recently started recording at 400 and had this to say about his experience:

Meredith’s well-rounded investment in music brings another level of excellence to 400 that enhances the offerings they already had.

“He has been willing to put in the work and do whatever it takes to make it as easy as possible for artists who are serious about their craft to make it. Numerous times he’s introduced me to people, and they’ve all responded with the same thing. ‘Man if you have Nick in your corner, you must be doing something right.’ That alone told me everything I needed to know about him,’” Savage continued.

When 400 Recording was announced as the winner in this category, Meredith was not in the building. One of the engineers making frequent appearances at 400, Tay Beats, was coerced into accepting on his behalf by one of the artists he works with, Mouse, who was sitting beside him. Mouse and some others “literally pushed me to the stage,” he said.

He’s Got That Fye

Soon after would come the announcement for “Engineer of the Year,” and Tay, who had already jumped down off the stage, heard his name called. He was chatting with “Hypeman of the Year” and “Community Activist of the Year” C-Tez, who has been a vocal protestor for justice for Brianna Taylor. C-Tez had his arm around Tay’s neck and kept talking to him as the engineers’ names were listed, and Tay broke away to return to the stage.

“I was like man, get off me. I’m gonna go up and get this award.” Tay laughed as he recounted those moments, radiating the excited, frenetic energy that comes with unexpected exposure. The venerable competition had Tay fooled into thinking he wouldn’t win. “I had a whole speech planned, though, just in case, but I completely forgot it. I just shouted out one of my biggest inspirations, my son, Blu Beats.”

For three days afterward, Tay was walking on air, and carrying his trophy with him everywhere he went. He has circled back to artists he dreamed of working with when he was first getting started and has seen one door open after the next.

Each and every nominee and winner is worthy of complete coverage here, and we regret condensing this story for space. Over time they will get their flowers on these pages. For a complete list of the winners, visit the KUEA website.