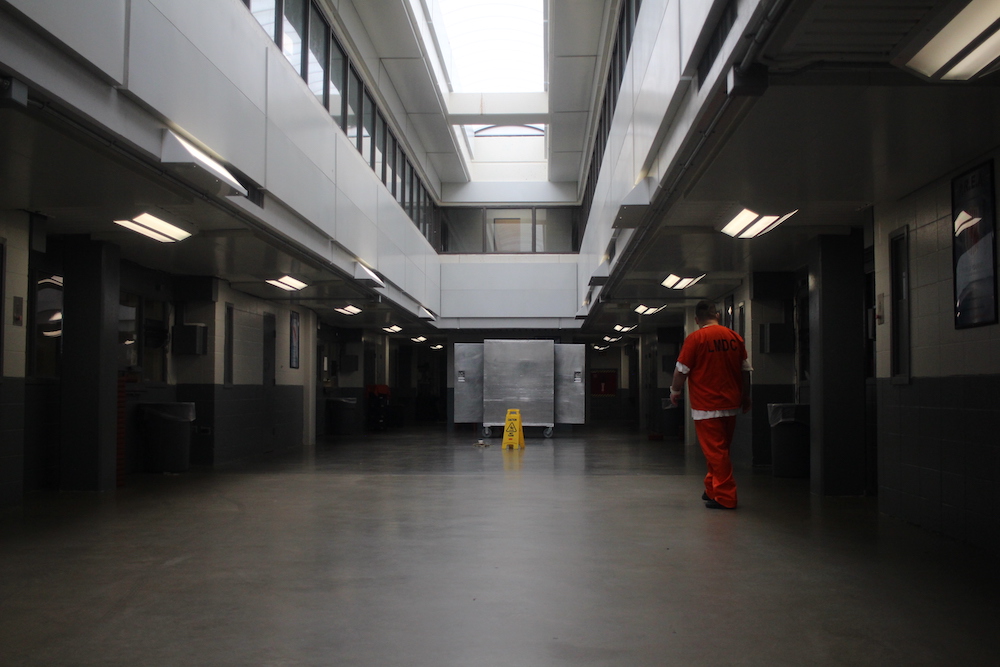 An incarcerated person walks through a section of Louisville’s jail. | Photo by Josh Wood.

Preliminary reviews of Louisville jail deaths by Kentucky’s Department of Corrections found repeated violations of the state’s jail standards, the minimum standards that local correctional facilities in the Commonwealth must maintain.

In all five cases where violations occurred, the Kentucky Department of Corrections found that LMDC did not properly supervise prisoners by checking on them at least once every 60 minutes (in the case of the average prisoner) or 20 minutes (in the case of incarcerated people at risk for suicide, detoxing from drugs or alcohol or prisoners who are “mentally or emotionally disturbed”).

While the jail standards are the minimum standards a facility must maintain, LMDC’s own jail policy is more in-depth than the bare-bones state guidelines and provides detailed instructions on how officers should handle situations.

LMDC policy on monitoring inmates is also more stringent than the state jail standards, mandating medium and maximum security prisoners be checked every half hour instead of once per hour. For prisoners on suicide watch, LMDC policy necessitates checks every 15 minutes instead of every 20 minutes mandated by the jail standards.

The observation policy violations stretched from the death of Gary Wetherill on Dec. 30 of last year to the death of Barry Williams Sr., who died three months later in late March. All of the violations came during a period that saw eight LMDC inmates die in less than four months, a jarring spike for a facility that previously averaged three deaths per year.

Among the documents LEO Weekly obtained were four plan of corrective action letters authored by LMDC in response to policy violations found by the state Department of Corrections. In three of those letters — one by former LMDC director Dwayne Clark and two by current director Jerry Collins — identical, word-for-word responses were provided to the observation policy violations.

In those identical responses, LMDC said that shift commanders had been instructed to inspect observation logs on every shift “effective immediately” and to “re-emphasize on a regular basis to their staff the appropriate procedure for conducting required observations.” Additionally, LMDC wrote, random checks of observation logs would be conducted.

LMDC also said the jail was trying to secure a vendor to provide an electronic tracking and monitoring system in the jail.

However, despite the corrective actions outlined, the Department of Corrections would find the same repeated violation of the prisoner observation jail standard over the course of months. While former LMDC director Dwayne Clark wrote on March 1 that the violations of the observation jail standard were being addressed, the state Department of Corrections would later find that the jail again violated the observation standard in two deaths later that month.

In one of the five observation violation cases, LMDC pushed back, saying that logs provided regarding the January death of Keith Smith showed observation rounds conducted at least once every 30 minutes instead of once every 60 minutes.

In that same response, LMDC did concede that they failed to properly notify the Department of Corrections of Smith’s death.

“The missed telephonic report was an oversight on our part,” wrote then-LMDC director Dwayne Clark. “This office will ensure moving forward the appropriate notifications are completed as required by designating a second staff member to verify the notification occurred.”

The Department of Corrections did not respond to inquiries about how the reviews were conducted and did not grant an interview request, but from what is written in the letters obtained by LEO, it appears that they are reviews of documents and not as in-depth as breach of policy investigations conducted by jail staff, which include extensive interviews with witnesses and reviewing available video footage.

For instance, in January, the Department of Corrections wrote to LMDC to inform them that no violations of the jail standards were found in their review of the death of Stephanie Dunbar, who hanged herself last December after being held in a cramped attorney booth that lacked a bed or toilet for 18 hours. A later LMDC Professional Standards Unit investigation found that eight officers had violated LMPD policy by not checking on her regularly. Two of those officers were also deemed to have broken policy by fabricating observation sheets. And another was observed on security footage giving Dunbar the middle finger the night before she killed herself.

In March, then-jail director Dwayne Clark wrote to the Department of Corrections to warn that their findings may have been misguided by the records they were provided.

In response, the Department of Corrections agreed to keep their findings pending while they awaited additional information from LMDC.

In a statement to LEO Weekly regarding the violations, Kentucky Department of Corrections spokesperson Katherine Williams said: “The Department of Corrections is responsible for enforcement of Kentucky Jail Standards, which can be found under Title 501 KAR Chapters 3, 7 and 13. When an in-custody death is reported to Local Facilities, the division conducts a review to determine if there were violations of Kentucky Jail Standards during the course of that incident.”

In an email to LEO Weekly, LMDC spokesperson Maj. Darrell Goodlett said the jail’s policies “either meet or surpass Kentucky Jail Standards” and highlighted the reforms and safety changes enacted by Collins, who took over as the jail’s director in April.

Since Collins took over, there have been two prisoner deaths.

“Director Collins has taken steps to enhance safety and security inside of Metro Corrections. This includes efforts on multiple fronts to combat dangerous narcotics and to increase staff awareness of mental health issues,” said Goodlett. “You are correct that one of the things coming in the future is using modern technology to record observations that officers conduct. This will increase accountability and supervisor awareness of the frequency of observations.”