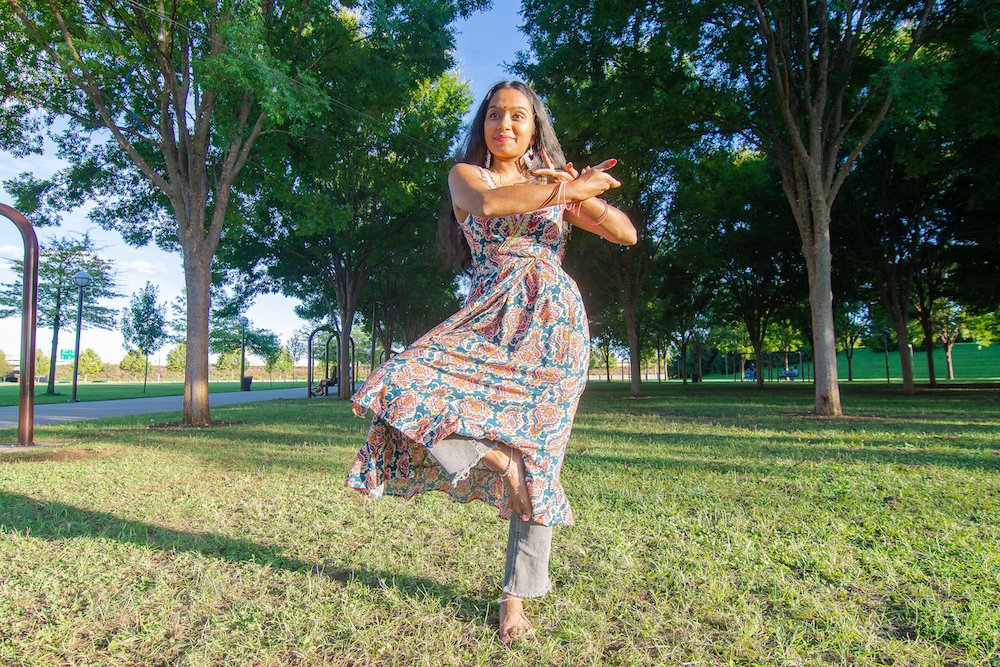 Being raised around dance at her mother Guru Smt Akila Iyer’s Guru Vandana Arts Academy, it seems natural that 24-year-old Shyama Iyer followed in her mother’s footsteps into the world of Indian classical dance, specifically the South Indian Bharatanatyam style of dance. Bharatanatyam traces its origins to an ancient text about theater written by a priest named Bharata Muni. The text, “Nāṭyaśāstra,” covers subjects from dance to stage production to makeup and the theory about the aesthetic and emotional impact of arts known as “rasa.”

This text and Bharatanatyam were the seeds of Iyer’s affinity for the power of both theater and dance.

“I grew up surrounded by her dance students and all the programs, all the excitement of music and dance around me,” said Iyer. “It really shaped who I was just growing up. That art form has informed most of my work as I get more and more further in my career.”

Iyer’s love of dance and theater took her from her hometown in Louisville to a BFA at Western Kentucky University then to a Master of Arts at Ohio State University. Now that she’s completed those and co-produced the 11th Geeva Arts Festival that hosts a weekend of Indian traditional performing arts, she is heading to Yale to the David Geffen School of Drama.

“I’m going to Yale for dramaturgy and dramatic criticism,” said Iyer. “Particularly, I want to look into ancient Indian texts, dramaturgical texts, which are related to the study of dance and music and theater and then kind of put those into practice outside Indian context, as well as inside them.”

It is important to Iyer that the movements of Indian dance become more familiar to dancers outside the culture. She thinks other art forms have much to learn from these traditional arts.

“When we come from solely the Western perspective — Greek theater — we’re limited to a certain aesthetic and I think that bringing in an Eastern or an Indian aesthetic is just giving us so much more to work with and it has its own contributions. One of my research topics in my master’s program was the “rasa” theory, which is an Indian concept from the Nāṭyaśāstra, a Sanskrit text.”

The Nāṭyaśāstra text informs how Iyer’s style of dance creates its costumes in colors to evoke specific emotions or sounds to bring a specific response from the audience, including the movements that help tell the stories of the dance that also may affect how the audience response and the experience they are given.

When Iyer performs, she says the most important equipment for her performances, like a ballerina’s shoes, are the Salangai or Ghungroos, the ankle bells: “They make all the rhythms that you’re dancing to. So in a way, your feet become one of the instruments.”

The skill with which a dancer can use the bells says much about their aptitude with the dance and Bharatanatyam offers many opportunities for improvisation.

“In Bharatanatyam, which was the tradition that I grew up in, there are hand gestures — many, many hand gestures, almost like a mime language. And, using those gestures, we basically speak on stage,” Iyer said. “So I think it’d be really cool for other dancers or actors to actually play with some of those hand gestures and see how… we call it like outside-in acting, when you have gestures or motions that might actually affect your inner psyche and bring out a character in that way.”

The stories told in Bharatanatyam are often based on Hindu mythology, but the style can be applied to many types of tales, and Iyer has tapped into some of those possibilities in her work.

“I’ve worked on a few productions where I kind of told the story of a young girl falling in love for the first time, and all the experiences she has with her very first relationship,” Iyer said. “And all told through this gestural language and in English, so not accompanied with an Indian language. So it’s much more accessible for any audience member.”

As we talk about her ideas to expand the audience for her dance, we also have to discuss the risk of cultural appropriation that comes with sharing traditional arts and allowing them to be adopted and incorporated into modern, Western forms of performance.

“It’s a tricky situation, and I think I consider it a kind of a double-edged sword,” said Iyer. “On one end, you don’t wanna make the art form solely for people who look a certain way. Right? In my opinion — everyone has their different opinions — but I feel that if you restrict it, then it’s a sort of a discredit to the art that you’re saying that this is just an ethnic art form, you know?”
Iyer says that, much like playing an instrument, there is no color attached to the learning of a skill, and that Indian traditions offer the same depth of skill as piano or violin.

“It’s for everyone,” Iyer said. “It has the richness, and has the long-standing traditions. And, the skills provided to do that art form are so skillful that you applaud anyone who’s able to do it. And, I think in the same way, the Indian traditions are so rich, so complex. We all have a body. We all have a voice. And, I think that putting to use those skills is just as commendable, no matter who you know, who you grew up as or who your parents are or who your grandparents are.”

Iyer has noticed that others outside the Indian culture have begun to learn Indian traditional arts and she feels that offers it the same legitimacy that we give other art forms.

“I think nowadays we see, actually, a lot of not-Indian people coming into the Indian classical arts who are really flourishing,” she said. “And, I think it’s really welcomed by the Indian community because it kind of just shows that, ‘Oh my God, this is like a legitimate art form.’ And it’s not just a thing we do for ourselves to remember our heritage.”

The issue of cultural appropriation is an issue — we’ve seen the evidence over and over. Yoga, an Indian tradition, is barely recognizable from its original form. And yet, art forms, like languages, can cease to exist if they do not grow and are not learned or shared. How many people do you know that speak Prussian? As it stands, India, like many places around the world, has traditions — certain styles of painting, puppetry and embroidery — at risk of disappearing because the knowledge and skill hasn’t spread far enough.

“If someone is doing — which this also happens — Indian classical dancing, and some person of maybe non-Indian origin, or maybe somebody who just doesn’t have the same learning in the art form takes it and then does the wrong classes, and then makes it a Zumba class,” she said, laughing. “Like, that’s not the coolest thing.”

But, Iyer is dedicated to her art and actively seeking and finding ways to share and introduce Indian classical dance to audiences. With the opportunity to study at a prestigious university and to explore her cultural traditions in more critical ways, it feels exciting to see where Iyer will take her career and even though she has to leave Louisville briefly to do it, we hope that she will return with something new to share with the local community.