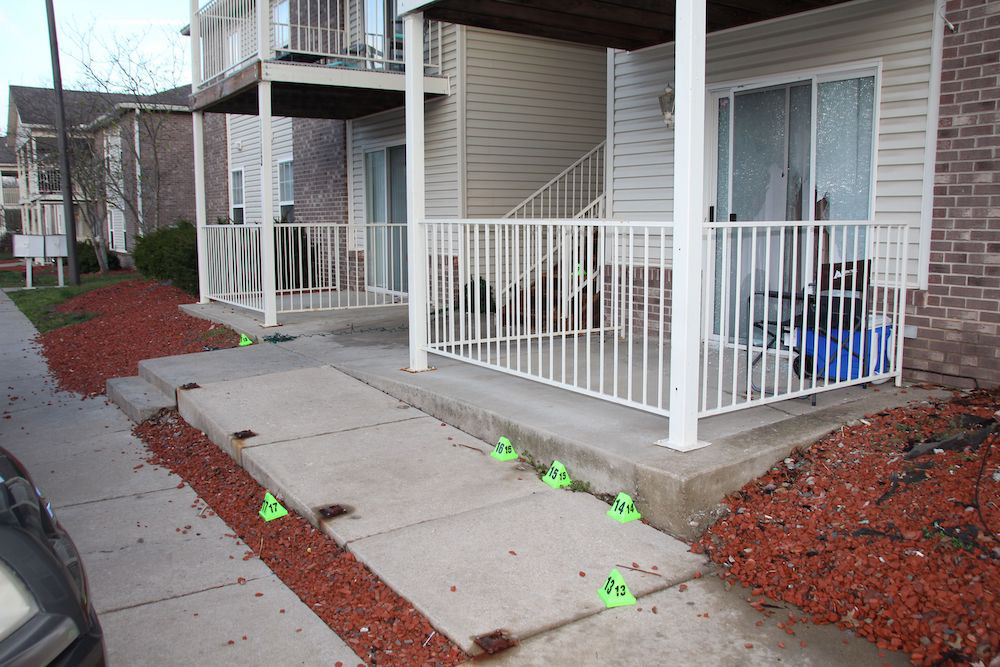 The front of Breonna Taylor's Springfield Drive apartment after she was killed in a March 13, 2020 Louisville police raid on her home. Photo via LMPD.

Current and former Louisville Metro Police Department officers involved in drafting the warrant for the botched March 13, 2020 that killed Breonna Taylor falsified information in their warrant application, conspired to cover up their actions and lied to federal investigators, the Department of Justice said on Thursday.

In a press conference announcing federal charges against four officers connected to the raid, U.S. Attorney General Merrick Garland said that Taylor should be alive today, but that the actions of Louisville police officers lying in the drafting of a search warrant caused her death.

“We allege that the defendants knew their actions in falsifying the affidavit could create a dangerous situation and we allege these unlawful acts resulted in Ms. Taylor’s death,” he said.

Garland added that LMPD officers worked together to cover up their unlawful conduct.

Three officers involved in the drafting of the warrant  — Joshua Jaynes, Kelly Goodlett and Kyle Meany — were charged. Brett Hankison, the former LMPD officer who fired 10 shots during the botched Springfield Drive raid and was acquitted of state-level wanton endangerment charges by a Louisville jury in March, was also charged, with the DOJ saying he fired through a sliding glass door and a bedroom window covered with blinds and a blackout curtain “after there was no longer a lawful objective justifying the use of deadly force.” Until Thursday, Hankison was the only person criminally charged in connection to the raid on Taylor’s apartment.

Garland said that Jaynes, Meany and Goodlett “sought a warrant to search Ms. Taylor’s home knowing that the officers lacked probable cause for the search.”

Jaynes, Meany and Hankison are all charged with deprivation of rights under the color of law. Such charges carry a maximum of life in prison “where the violation results in death or involves an attempt to kill,” according to a DOJ press release. Jaynes faces additional charges of conspiracy and falsification of records in a federal investigation, charges that carry maximum sentences of five and 20 years respectively. Meany faces an additional charge of false statement to federal investigators, which carries a maximum five year sentence. Goodlett is charged with conspiracy and faces a maximum sentence of five years in prison.

Jaynes and Hankison had been previously fired from LMPD for their roles in the raid on Taylor’s apartment. In a statement, an LMPD spokesperson said termination procedures for Meany and Goodlett got underway on Thursday. They added that LMPD would refer all questions about the investigation to the FBI.

The early morning killing of Taylor, a 26-year-old Black ER tech, would lead to months of street protests in Louisville after more details about the botched police raid were made public. As racial justice protests swept the country in 2020, Taylor’s name was chanted alongside that of George Floyd, the Black man murdered by police in Minneapolis in a viral video.

The search warrant for Taylor’s apartment hinged on the main target of an LMPD narcotics investigation, Taylor’s ex-boyfriend Jamarcus Glover, receiving packages at her apartment.

According to an indictment, Jaynes, who was fired from LMPD in 2021 for being untruthful in obtaining the warrant, knew that Glover was not receiving packages at Taylor’s home because he told Goodlett “that there was no evidence of [Glover] receiving packages at Springfield Drive.” Additionally, the indictment said, Jaynes told Goodlett that “the Springfield Drive warrant affidavit did not contain enough recent information connecting Taylor or her home to criminal activity.”

Goodlett then allegedly added a misleading paragraph to the affidavit saying that detectives had verified that Glover listed Taylor’s home as his current home address.

According to the DOJ, on or around May 17, 2020, after media outlets reported that the postal inspector said Glover had not received packages at Taylor’s home, Jaynes texted Goodlett to arrange a meeting with her in his garage the next night. At that garage meeting, according to the affidavit, Jaynes “relayed to Kelly Goodlett that they needed to get on the same page because they could both go down for putting false information” in the warrant.

Another indictment alleged Meany approved the warrant despite knowing there was false information in it and this past May “willfully” lied to federal investigators about the planning of the warrant.

At downtown Louisville’s Jefferson Square Park — the epicenter of 2020’s protests that was relabeled Injustice Square by activists —Taylor’s family and attorneys gathered to celebrate the charges.

“What a great day to arrest the killers of Breonna Taylor,” said Crump, who also represented the families of George Floyd, Michael Brown and Ahmaud Arbery.

Crump added that Thursday was “about Breonna and all of the other Breonnas across America, the Black women who have been denied justice throughout the history of this country when they have been abused, assaulted, murdered, raped and disregarded.”

Speaking at the square, Taylor’s mother Tamika Palmer said she has waited 874 days for justice.

“Breonna has taken us all to a place we can’t even imagine. Today is overdue, but it still hurts,” she said.

In a statement, Louisville Mayor Greg Fischer said: “After two long years of relentless investigations, today’s indictments are a critical step forward in the process toward achieving justice for Breonna Taylor. My thoughts are with Ms. Tamika Palmer, Breonna’s mother, and all those who loved and cared for Breonna.”

The charges announced on Thursday come more than two years after the FBI first said it was conducting an investigation into Taylor’s death.

On Twitter, former LMPD Sgt. Jonathan Mattingly, who was shot by Taylor’s boyfriend after the door to her apartment was breached, claimed that the FBI used “tactical teams” to raid the homes of the four officers. “It’s political theater. These officers had cooperated. There was no need for this show of force,” he wrote.

[Update from 4:38 p.m.: In a follow up tweet on Thursday afternoon, Mattingly wrote that he had previously received “bad information” that FBI tactical teams were used in the arrests.]

A separate wide-ranging DOJ pattern or practice investigation into LMPD is ongoing.