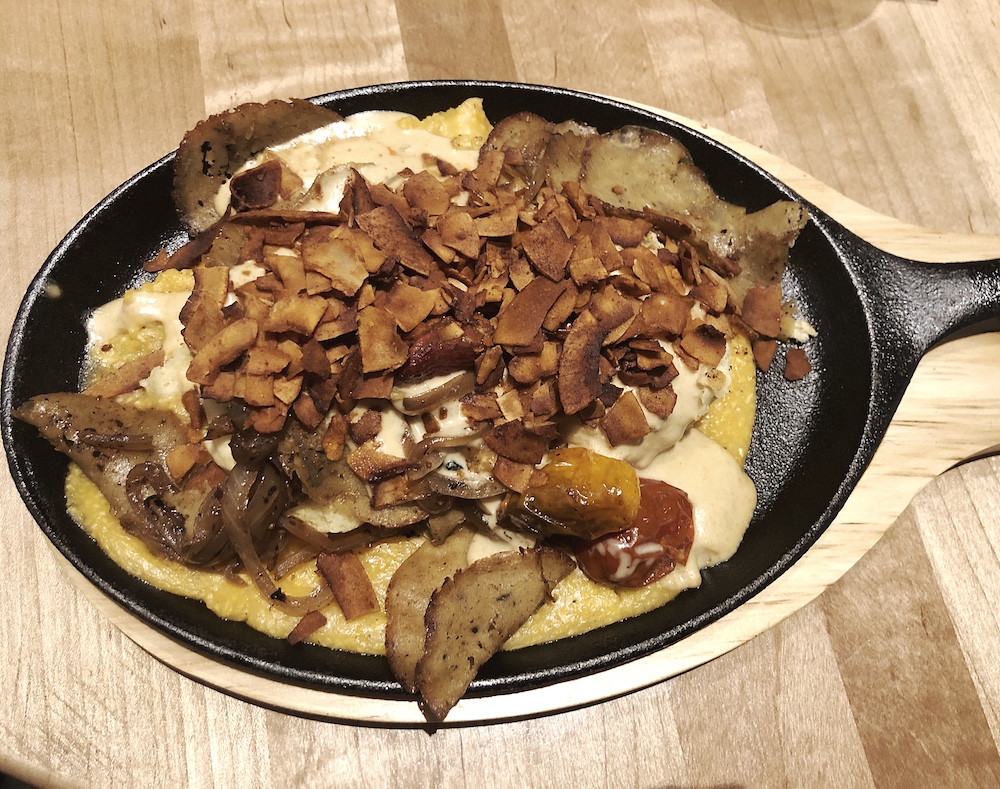 You can find Hot Browns all over our twon, but only at V-Grits does this occasional special replace animal-based meat with crispy thin-sliced deli turkey made with wheat-gluten seitan.

How can you tell when a trend has run its course? Yogi Berra had the right idea with his memorable observation, “Nobody goes there any more. It’s too crowded.”

Restaurant and culinary trends are sort of like that, too. A great new concept takes hold, catches fire, and before long everyone is doing it, some in slavish imitation, others adding their own riffs. And then everyone tires of the idea and we move on.

Except when we don’t. A month ago I devoted this space to a rant about culinary notions that would have been better left uninvented. Today let’s look at some restaurant trends that delighted us in their time, but that may (or may not) be past their best-by date by now.

This all came to mind recently when I was enjoying an excellent dinner at Barn 8 Restaurant (LEO Weekly, August 17). Just about everything was outstanding, but I was briefly taken aback when a beautiful salmon fillet came out garnished simply – very simply – with a casually strewn dab of neon-pink quick-pickled red onions.

Let’s be real: Pickles have been around since the rise of civilization in Mesopotamia some 4,500 years ago. Pickling vegetables in vinegar or brine was a great way to preserve them in those days before refrigeration. And pickles are delicious! It’s no wonder that just about every culture has pickles and loves them.

When refrigerators finally came along, it wasn’t long before someone invented refrigerator pickles, a process that sped the process to get us from raw veggie to taste pickle much faster.

Even more recently than that – it may or may not have been Martha Stewart who fired off the concept in 2016 – quick-pickled red onions appeared as a garnish on restaurant plates. The trend took off from there.

They’re pretty, tasty, and oh so pink. They’re easy and quick to make, an advantage in the restaurant kitchen. And now that the excitement has worn off, they’re a little boring. Which brings to the point of this essay: Dishes that trend (a bit like Twitter threads that trend) are popular and fun, until they are not. Let’s take a look at a few more food trends that lighted up the Louisville dining scene for a while, and maybe still do.

It would be easy to assume that shrimp and grits is a Louisville-born treat. The dish has been popular here for 27 years, and you’ll still find it on plenty of local menus, usually with each chef’s particular spin.

It’s not part of our local heritage, though. We can trace that origin date back to 1995, when Shawn Ward, then the executive chef at Jack Fry’s, brought it home from South Carolina’s seaside Lowcountry, where it really is a historic tradition.

Originally a simple staple of poverty cooking, making good use of cheap and readily available ingredients, on our restaurant scene it became an upscale appetizer, adding fancy sauces, garnishes and extra ingredients to its simple basics of grits, shrimp, maybe spicy sausage and cheese. It became so locally popular that, when a group of local foodies organized a shrimp-and-grits fund-raising throwdown in 2009, they got 15 chefs to participate, each with their own variation.

It’s still popular. It’s still good. And you can find it everywhere, the sure sign of a trend that has become a tradition.

Look up “traditional Louisville dishes” in any reference, and you’re likely to find the Hot Brown listed right there with Modjeska candies, Benedictine spread, and the cheeseburger. That’s fair, since its origin story can be traced all the way back to the Brown Hotel as a postdance midnight snack in the 1920s.

Chef Fred Schmidt’s original was a simple preparation, but it already had the basic heart-attack-on-a-plate ingredients that make the Hot Brown popular: Turkey, bacon and Mornay, the classic French cheese sauce, atop toast points. The old Brown deteriorated, then closed in 1970, then served as the old Louisville Board of Education office for a decade before returning, restored, under a series of national chain operators.

Of course the Brown continues to serve the Hot Brown, publicizes it eagerly as the hotel’s own invention, and its chefs have twice defeated Food Network’s Bobby Flay in Hot Brown throwdowns. Now scores of local eateries offer individual takes on the Hot Brown, including a worthy Hot Brown pizza (Danny Mac’s) and an excellent vegan version (V-Grits).

Will this trend ever die? As this classic Louisville dish approaches its centennial, I think not.

Pity the poor brussels sprout. Hardly anyone loves it. What is there to love about a miniature cabbage the size of a plum? Yet for some reason that it is difficult for me to discern, brussels sprouts became a gourmet treat at local restaurants some time during the first decade of the new century.

I think the secret to success in a fancyfied brussels sprout dish is to mix it with something that people love more than brussels sprouts. The short-lived Hog Father Pizza, for instance, crisped them up with pork belly. At Fork & Barrel, a brunch dish shredded sprouts and doused them with a smoky, unctuous mustard-sherry-bacon vinaigrette plus mild goat cheese and marcona almonds. Bar Vetti, in its original 800 Building location, crisped them up in a veggie fritto misto. Those all worked to improve brussels sprouts, I’ll admit that. But the only one that ever really convinced me was a sliced, roasted, caramelized delight slathered in fiery Korean spice at the late, lamented Rye.

Brussels sprouts. They may be trendy, but I’m hard to convince.

I could go on … there’s truffle oil and eggs in unexpected places and bacon or eggs where they really don’t belong. But those are just trends. They too shall pass, right?