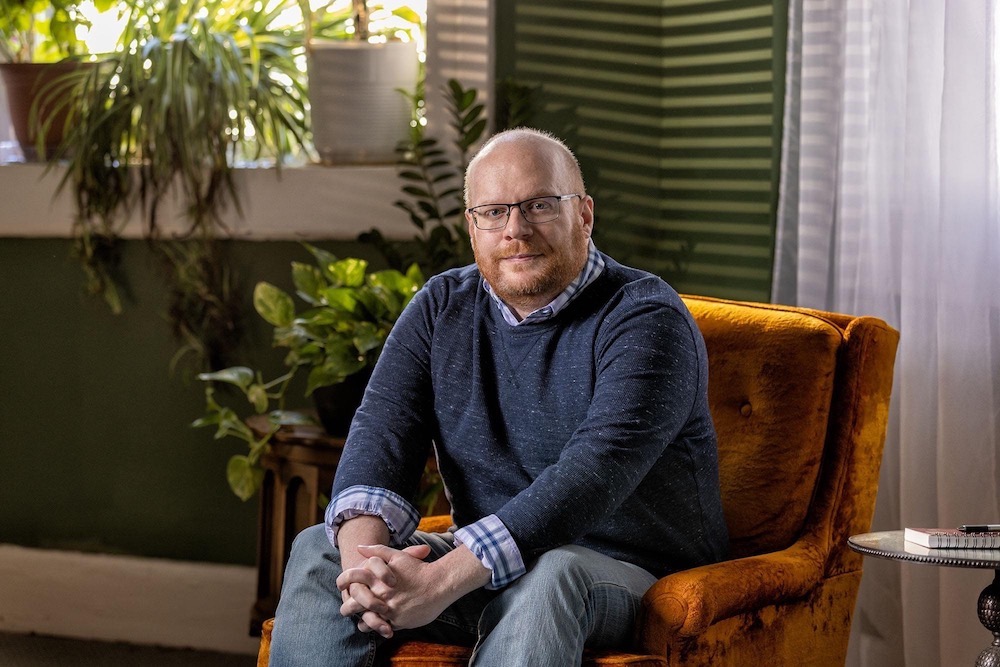 Jason Sizemore is a well-established figure among Kentucky’s small-press publishers.

Coming back around for its ninth year, the Imaginarium Convention, which welcomes all sorts of creators and consumers of imaginative arts, will be held at the Holiday Inn Louisville East July 8 through 10. This has come to be much more than the original gatherings of science-fiction / fantasy / horror writers and readers — and that’s only somewhat surprising to those who’ve put in the most effort for Imaginarium’s success. LEO had a chance to speak with founder Stephen Zimmer and organizer Holly Phillippe to learn what’s in the 2022 edition. We also exchanged emails with two award-winning creative professionals who’ll be attending.

Zimmer wants it known that the convention has always been for all genres, but it’s taken a considerable messaging effort to get significant attendance beyond fans of the speculative genres. Phillippe points to the results: for instance, this year there will be entire groups of romance writers and mystery writers participating. Lee Pennington, who certainly has a restless imagination but would be considered part of the mainstream, is one of several poets coming.

But beyond writing — and the convention officials are quick to comment that they don’t just mean storytelling that lands in books, but also screenwriting, writing for gaming and what Zimmer calls “all the other spheres” — Imaginarium’s expansion has headed many directions, which make for logistics demands but offer innumerable rewards. Specifically, he said, “the film festival we expected to grow steadily as time went on — and we’re actually very, very pleased with the caliber of projects we’ve had. This year, we’ve had by far our largest field of entries. It’s international, and all genres. We opened up for web series a couple of years ago, so we’ve got that whole category now. We expected that to grow, but it’s grown faster and the quality has grown much higher than we expected to see at this point.

“Gaming actually has been surprising,” he continued. “We didn’t know how long it’d take to develop that, but last year we had a packed gaming room—and it stayed that way. Now we’re hoping that cosplay takes a step in that same direction.”

Whether it’s on the page or on a screen, a lot of what will be shown and discussed this year will be new works created during the pandemic years. Imaginarium was already known for having a regular dynamic where an attendee working on a manuscript one year would become a published author and a spotlighted guest in subsequent years — but the lockdown period inspired quite a lot of content development. That might mean a barrage of attention for this year’s guest of honor, legendary editor Ellen Datlow. But it has already meant at least one creative highpoint for a new guest at the convention —Jeff Strand, one of three Bram Stoker Award winners who’ll be in town.

Strand is known for humility and humor beyond the usual for horror writers. But when asked if he and his wife — visual artist and fellow Imaginarium spotlighted guest Lynne Hansen — experienced a different level of productivity or interest in different creative pursuits, he said, “We were both incredibly productive… partly out of having more time to work, and partly out of ‘What if the economy crashes?’ desperation.”

Regarding his Stoker win, which came after so many nominations that he was getting some ribbing from colleagues, he said, “Awards are fun, and ultimately it’s more fun to win than lose, but I didn’t think ‘At long last! Validation!’ The trophy is really freaking cool.”

Jason Sizemore is a well-established figure among Kentucky’s small-press publishers, just as he’s made a name for himself (and for Apex, his magazine and book line) as an editor with an eye for talent and as a devoted nurturer of a richly creative generation of writers. But Lexington-based Sizemore has a remarkable story of combined personal and professional resilience to share.

One might think of the first chapter being Apex had to make business adjustments and venture into crowd-sourcing. But what came next, and what sealed Sizemore’s determination, is clear in his status summary: “Three years ago, I had my jaw removed and replaced with a leg bone and titanium rod. All things considered, I’m doing well. Despite the current economic hardships, we continue to hang on. Our book line has been doing great. Apex Magazine keeps winning awards. I’m happy with the business. As the world continues to fracture, losing hope is easy. Stay positive. Keep fighting until your last breath.”

If the variety in the halls of the convention is too much, perhaps the Apex space is a good place to start exploring the possibilities. Jason Sizemore says he can be found “wearing my editor hat doing panels and Q&As. But I’m happy to talk with people about publishing and writing!” •

Imaginarium Convention tickets are $135 for a weekend pass. More information can be found at entertheimaginarium.com. The hotel was fully booked as of a few days ago, but last-minute cancellations do happen.