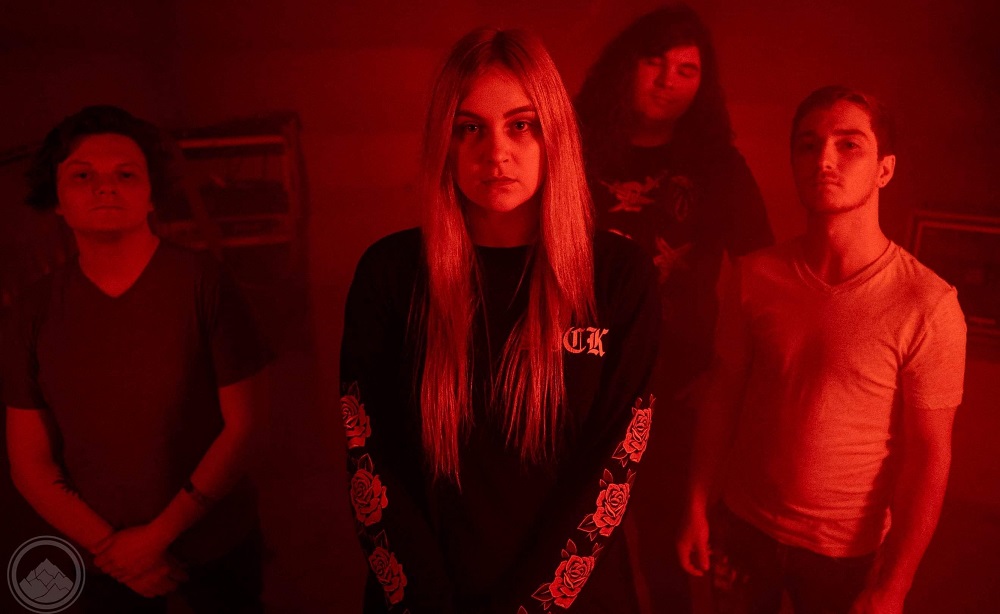 The local female-fronted deathcore band sero\\tonin has burst onto the music scene — and that’s a reason to be happy.

Vocalist Melissa Eagle, guitarist Josh Smallwood, bassist Austin Crass and drummer Chris Bindner made their debut as a band in late January. When Crass was putting the band together, he wanted to bring in a female vocalist because the deathcore genre itself is “a bunch of dudes telling you how they feel, what they think,” he said. Centering a female voice was a way to push back against that, to prove that a woman can bring lyrical and aural power to a genre that is otherwise male-dominated.

It certainly worked: since the release of their first single and music video, “No Escape,” in late February, the band has accrued YouTube and TikTok plays in the five digits, plus plenty of supporters. Next month, they’ll be playing in front of thousands of people at Kentucky Irate Fest, sharing a venue with Slaughter to Prevail and Norma Jean — and, no pressure, but it’ll only be their second show ever.

Not bad for a band that’s only released three songs.

In fairness, sero\\tonin has existed, albeit out of the public eye, for longer than half a year. In 2021, in weekly practices and rehearsals at Bindner’s parents’ house in rural Indiana, they operated under the tentative name ISayDie. It came from a transliteration of “Aes Sedai,” powerful female mages in the fantasy series “The Wheel of Time,” and was meant to honor the fact that they were female-fronted. Still, Eagle said, the name “just never sat right on all of our stomachs.”

It was Eagle who proposed “Serotonin” instead, though at first she thought it was “lame” — but her bandmates didn’t, and it stuck. The group tweaked the stylization a bit, realizing that they’d need to stand out from Google search results about the namesake chemical, and ultimately settled on “sero\\tonin” — lowercase, no spaces, two backslashes. It creates formatting issues on certain platforms, so they occasionally replace the backslashes with lowercase Ls or capitalize some of the name. But, as they wrote in a Facebook post: “People keep asking about our name, Sero\\tonin. If we’re lacking it, or meant to give it. Well, the answer is, yes.”

By the time they had their first show at 21st in Germantown on April 7, as one of four supporting acts for Left to Suffer, they’d already gotten plenty of time to hone their work. A sold-out crowd of 150 people showed up that night; there were even two separate mosh pits during their set, which Eagle was “hyped” to see.

Still, support from fans doesn’t always guarantee a band’s road will be easy, especially for one with a female lead in a male-dominated scene. Most deathcore musicians and fans are men; although sero\\tonin does have plenty of male supporters, they’ve also gotten a few detractors. A YouTube comment on one of their videos says that vocalists like Eagle use “too manly of a way of singing for a woman in my opinion.” Another asks if Eagle’s singing is her own or “male with the girl mouthing the lyrics?” One reads, “Billie Eilish needs to stick to pop…”

Eagle, who had blue hair for 10 years before a recent switch to blonde, is no stranger to Eilish comparisons — not all of which are derisive — nor to more general sexism in the scene. In the band’s earliest days, some men told her she should present a more sexualized image, which she refused.

Those comments, as well as those that suggested it’d be easy for a female musician to get popular in the metal scene, “made me feel gross, because I’m working hard here! These songs, I’ve poured my heart into. And I’ve spent the time writing and rewriting, rewriting, rewriting to record and then record music videos, just for people to look at me and be like, ‘Oh, you’re just getting this attention because you’re a woman.’”

“It’s been very difficult, but also, I like the challenge. I’m gonna stay me. I’m not gonna change to appease anybody, and I’m going to continue to get my point across,” she said. “When you work this hard, vocally, you’re gonna get somewhere.”

On the plus side, at least, she and her male bandmates have a comfortable chemistry — but you might think otherwise from watching the music video for their single “193.” The video starts off with Eagle dragging Bindner’s dead body, wrapped in a tarp and covered with (fake) blood.

Between shots of the band playing, we see what led up to the moment: as Eagle, in uncaptioned dialogue, vents to her bandmates, they roll their eyes, shrug her off, or nearly ignore her altogether. Her frustration builds until she snaps: one by one, she kills them, stabbing Smallwood with a knife, strangling Crass with a loose bass string and unlocking a jack above Bindner, crushing him underneath a car.

The twist: It was all a dream, but implied (perhaps) to be a diegetic revenge fantasy.

For what it’s worth, Eagle’s actual dynamic with her bandmates is far better. She and Crass have been friends since they were teenagers, and he introduced her to Smallwood and Bindner, “these lovely people who have never, never ever given me a reason to be like, ‘I don’t like you,’ even in the slightest.”

Still, the video has a dark origin: it was inspired by the true story of Susan Wright, “The Blue-Eyed Butcher,” a woman who stabbed her husband at least 193 times, for reasons that are still debated. Eagle made it clear to me that she does not condone Wright’s actions in any way, but she wanted to explore the theme of her case at a deeper level — through the lens of someone who is pushed to an out-of-character breaking point.

It’s not the first time the band’s drawn inspiration from real life — that is, in fact, where all of their songs come from. “Call of the Void,” whose name comes from the French term “l’appel du vide,” is about suicidal depression, which Eagle struggles with (“All these demons / will finally die / along with me / fuck it!”) “No Escape,” whose music video stars a tarantula called Nevermore, is a song about “how it feels to be caught in the web of a spider” — figuratively, as the song alludes to a sexual assault (“Fleeting nightmares of your mattress / Haunt me still to this day / But I’ll drag that skeleton with me / Until we both land in our graves.”) An upcoming song, “Chasing Highs,” which will be released on Sept. 23, is about Eagle’s struggles with her late brother’s heroin addiction.

For Eagle, singing about those issues is deeply cathartic.

“When you go through some of these things, you do get filled with a lot of anger. When you’re not heard, and you’ve been through these situations, for me, it is so healing to get up on stage, to get into that garage, and scream my head off about things that I want to scream my head off about,” she said. “That’s my favorite part.”

That translates into a cathartic experience for the listener, too. Deathcore is a heavy genre, of course, lyrically and otherwise, but jamming to ferocious vocals backed by strong instrumentals is one formula for happiness. If you’re a fan of screams and snarls, listening to Louisville’s newest female-fronted deathcore band is a great way to get plenty of sero\\tonin. •