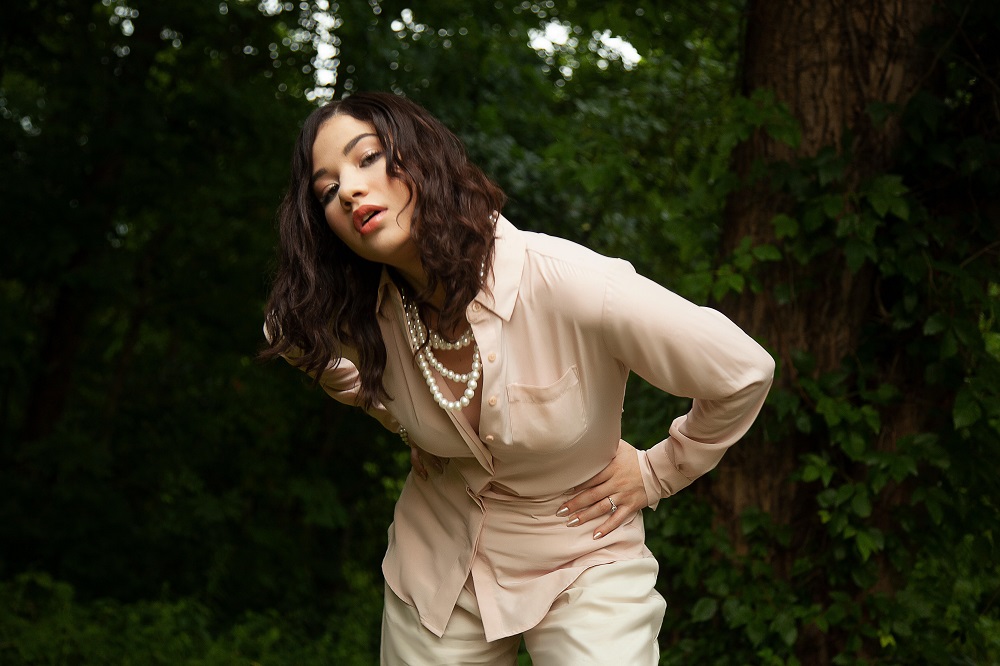 Louisville Orchestra conductor Teddy Abrams collaborated with Latin artists through a relationship with Kentucky Refugee Mission to deliver a beautiful performance celebrating Latin music. The event, which took place at Logan Street Market, was produced by Fred Bogert, a producer and composer with credits for miles, who once used the famed RCA Studio B in Nashville as his home base. Now living in Louisville and enjoying the fresh wave of creativity that can happen many decades into a career, he volunteers with the Kentucky Refugee Mission (KRM), sharing his music skills with artists that he connects with through the organization.

“Teddy asked KRM if somehow we could put together a Latin assemblage of some kind that he could jam with in live performance. So I got nine of these intense musicians, of which Magda Sanchez was one,” said Bogert. “What I saw happen was Magda, who ended up being the front person, standing there with that microphone. She was dressed in white and she just took off. She directed the audience’s attention to Teddy on the piano and Tito on the trombone for a solo and this and that. She just drove the bus, in terms of leadership, and knowledge of how to handle an audience. She has that intuitive sense that you can’t teach. She’s a true performer.”

It is performance that has defined Sanchez’s career, and what a journey it has been.

Until February of 2016, Sanchez lived in Holguín, Cuba, a city of about 300,000 on the northeastern side of the island of Cuba, where, according to Sanchez in a lyrical moment, “the sun was silver and the days were counted backwards.”

In the world of entertainment, discovery comes from the outside. Typically, the artist has already discovered themselves in some sense. As their creative expression blooms and their thoughts and activities shift into ever more creative spaces, the artist tends to set their hopes on being seen and heard by somebody who can catapult them into the spotlight, or, as they say, “put them on.”

A&R’s who are part of a pipeline to real professional work, actual success, are few and far between, no matter where you are in the world. So when a talent scout looking for acts to perform in China found Sanchez in her native Cuba, the stars aligned. Along with three bandmates in a group called Vista Cuba, she was signed to a live performance contract and whisked away to Wuhan. In a sense, she was lucky.

Lucky that China established a consulate in Cuba in 1879. Lucky she was born and raised in Cuba. Lucky that Cuba and China enjoy healthy trade relations and vibrant cultural exchange. In China’s massive economy, there was a place for Sanchez.

All that good luck in no way diminishes her talent. Her voice conveys emotion with a sweet, smoky tone, pulling you closer, like a magnet. Sanchez’s 2014 video for the song “Si yo pudiera” is an early look at her emergence and possesses a mysterious quality that serves as a portal to another world, a world of Sanchez’s own making.

The move to Wuhan, a city with the population and magnitude of New York City, was a major transition.

“At first, I felt fear because I knew that this decision would change my life forever… I was only 20 years old. But, before signing my contract, I read it several times and I felt that everything was going to be fine. I had very little knowledge about that country and its culture. I didn’t even know that they ate with chopsticks, so it was very strong culture shock,” said Sanchez.

The trip could be described as arduous. She and her bandmates traveled from Holguín to Havana, then from Moscow to Shanghai, and from Shanghai to Wuhan. Not having slept in days, they were escorted to the Renaissance Hotel, where they would be living and performing, where they were fed and introduced to their team: a manager, public relations officers, their translator and lots of staff. Soon they settled into a posh lifestyle with all the creature comforts.

Sanchez found that frequent performances — five nights per week — for an entire year sharpened her skills. One of two singers in the group, Sanchez was accompanied by piano, guitar and bass. The band lived a luxe life — a picture of success that many artists dream of — and then it was time to go back home. Some of the bandmates had children back home in Cuba and could not stay away forever.

“​​I returned to Cuba and was there for a month when I decided to move to the United States. I came here with my Spanish passport in 2017, and after a year and one day, I applied for citizenship through the Cuban Adjustment Act,” recalled Sanchez. “I chose Louisville because I had some Cuban friends here and discovered that the Cuban-American community was growing.”

She has stayed in Louisville and records with Bogert at his home studio. Sanchez graduated from Jefferson Community & Technical College in May with a science degree, and is now more free to focus on her music. She just dropped a new album, La realidad Diferente, which is rich with ballads about the ephemeral nature of life, the journey of exploration and magical moments. As you find with songwriters — all artists, really — there’s a solitary feeling — akin to loneliness, yet different — that permeates her songs. Her lyrical subjects and the mood of her music seem to be outcomes of her incredible journey.

“I’m really happy to meet people like Magda, and she’s not alone, but she does stand out in the sense that she has so many of the pieces of the very complex puzzle that it takes to succeed in show business. At a very young age, she was addressing the world market and holding her own on that level,” said Bogert. “My prediction for Magda is that she continues to push as an adventurer, as a true artist does, to get closer to finding who she really is and what that means and how she would express it and who she can reach.” •