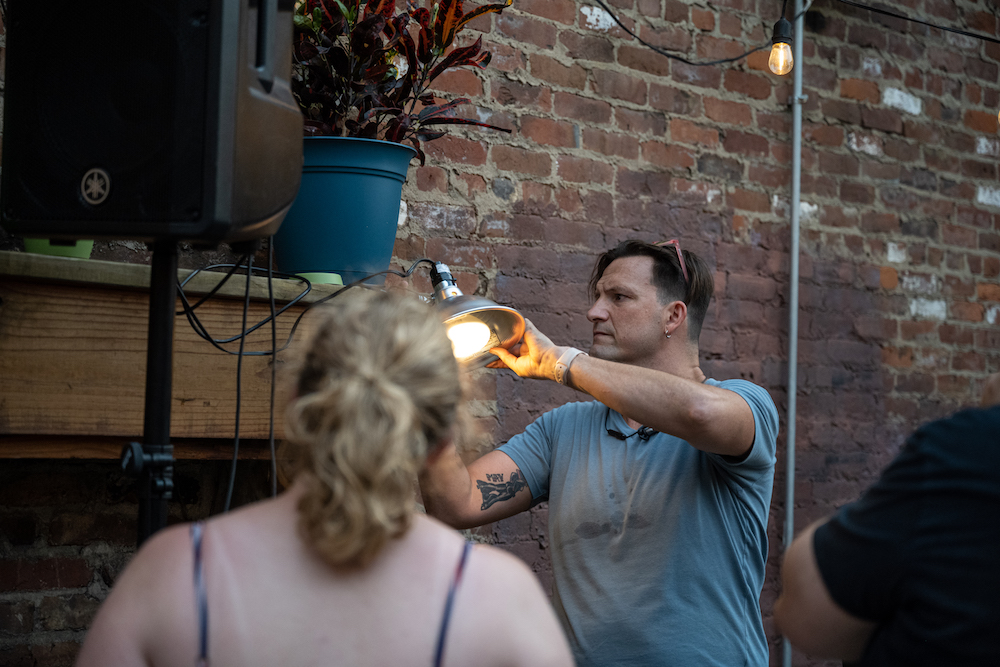 The Louisville Fringe Festival is a festival of indie arts productions that range from theater to music to comedy and sometimes all of the above. With performances at the Whirling Tiger and a reading series at the Old Louisville Coffee Co-op from July 28 – 31, the festival will happen in two venues. This year the festival is partnering with Derby City Playwrights.

LEO got the latest on Louisville Fringe Festival from Founding Artistic Director Allie Fireel, who shared their thoughts on this year’s events. They had plenty.

LEO: Talk about the aim of this year’s fringe festival?

Allie Fireel: The aim is the same every year, which is to bring together a community, support that community and challenge that community to make better art, make a better arts scene for artists and audiences and ultimately to make a better world. Like, we have big dreams. We’re dreamers. But the way that expresses itself changes every year, and it always emerges early in the planning stages. This year, David Clark from the Derby City Playwrights contacted us very early on, you know, like last fall or something, and asked if we wanted to team up and host DCP’s new play reading series, or you know, if there were other ideas we had about what a collaboration could look like. So that really became the main focus for me, and I spent a lot of time talking with David about this year — and the future. This year, we’re doing a reading series, and putting up one production of a play written during an earlier season. My dream — and I love saying this out loud because I’ve learned that saying shit out loud is kind of what you have to do to make yourself do something. My dream is the reading series, six full plays, and a 15-minute play festival. Ten-minute plays? Pffft. That’s last century. 15 minutes is where it’s at.

What is new at the festival and something that is different from previous years?

Well, because Fringe is in a lot of bars and stuff usually, a lot of people don’t realize I’m sober. When I first quit drinking, there weren’t many places to see new independent theater that didn’t serve alcohol. I was scared to even be in a room with alcohol. So, the DCP reading series this year is actually being held in The Old Louisville Coffee Co-op, a safe space for people who are sober, and a space for queer people of all ages. And it’s like, queer kids between, like, 13 to 21, they don’t have a lot of places, because so much of the queer community is in bars and stuff.

Who are you working with to bring this festival to life?

We have a mind-blowing number of excellent partners. There’s DCP of course, and the Co-op. We’re also doing co-productions with several cool groups. Haus, which is an awesome drag and burlesque show, the storytelling show Double-Edged Stories is joining us. And also just — I mean everyone. Again, Fringe, to me, is about that community of creativity.

Then, of course, the rest of the Fringe board, i.e. the other suckers like me who are doing all the work. I end up in the literal spotlight more than they do for Fringe. But Nick Hulstine, co-founder and associate artistic director, and Gracie Taylor, associate producing director, and Jon, ahem let me say it right, Pulitzer Prize-winning photographer Jon Cherry, our development director. They are the people who make it work. I just talk a lot.

What should the audience for Fringe expect this year?

So much — theater, stand-up comedy, burlesque, storytelling, drag, sideshow, hopefully a fire eater, one-person shows, some shadow puppets, some hip-hop, selections from a rock opera. I’m sure I’m forgetting something.

When did you start working on Fringe and what drives you to continue to do it year after year?

Well, looooong ago, Nick and I put together opening night festivities for the third year of the Slant Culture Theatre Festival. That’s how we met. A couple years later, I was helping out with organizing DCP, and Nick was just starting to work on getting the Fringe festival going. DCP decided to have some stuff at that first festival, and I sort of defected, I guess. Nick and I just clicked again, so as soon as he and I started talking, we realized we wanted to do Fringe together.

And that first year was a trial by fire. It was so much work, we just had no idea what we were getting into. I was walking around my house bumping into walls and muttering “never again.” But then the festival happened. And it’s just love. The artists get to do what they love; they get to see art and fall in love with it, and fall in love with each other artistically. You know, a lot of us, artists and stuff, we kind of isolate sometimes, and there is a huge amount of fear and vulnerability to creation. You rip out your heart so people can poke it with sticks. Especially when you are trying to do new shit. We get to help make sure that there is a safe place to be brave. And we get to try new ways of making it work. And that really encompasses what we believe in. Brave artists deserve safe space, and audiences need safe places to be uncomfortable. Not unsafe, uncomfortable.

And that’s why we keep coming back. Love, community, creation and a way to actively push back against all the fucked up parts of the arts scene. •

Louisville Fringe Festival takes place from from July 28 – 31 at Whirling Tiger and Old Louisville Coffee Co-op. Tickets prices will be set by artists, but many are around $10, and can be purchased at the door. For more information, visit loufringefest.com.