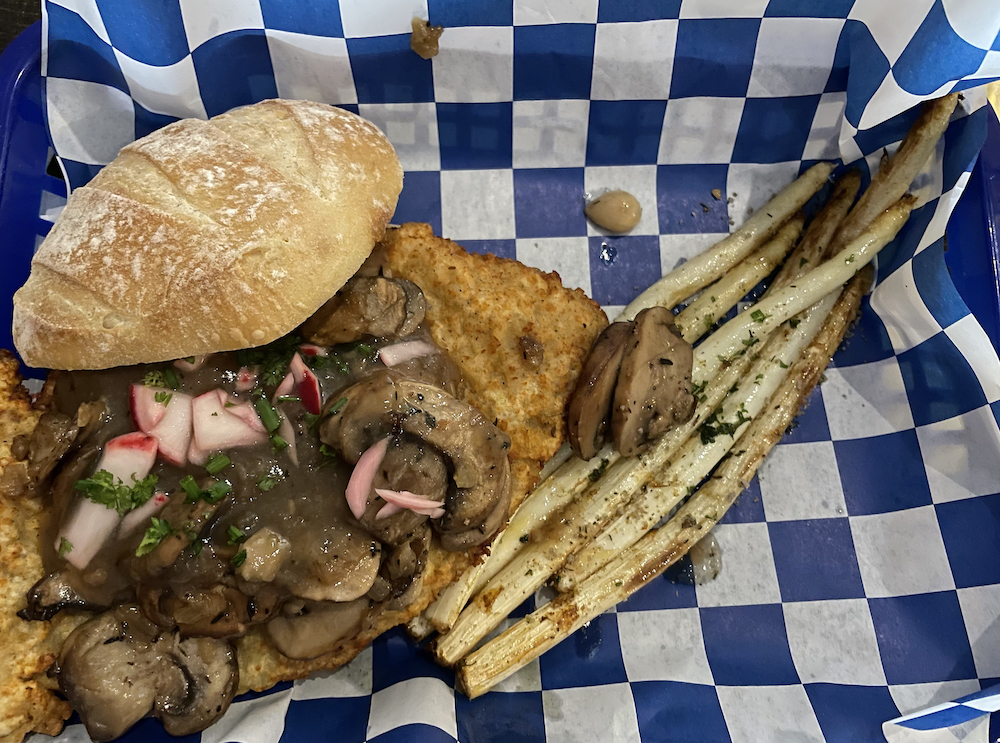 Pork schnitzel, a classic German dish, comes in a variety of styles at Common Haus. It's available as a full course or, pictured, a Jäger Schnitzel sandwich with a side of seasonal white asparagus.

The beloved German restaurant Gasthaus closed last month after nearly 30 years of delighting us with delicious schnitzel sauerbraten and more. So, where are we going to go now when we’re hankering for wurst or some flammenkueche or even a giant German pretzel?

Good news! A quick trip across the Ohio will bring you to Common Haus Hall, an outstanding recent arrival on the local dining scene.

Common Haus Hall is a sibling to New Albany’s Pints & Union, and it’s easy to see the family resemblance between both eateries in concept and style. But where Pints & Union brings the vibe of a British pub and curry house to the table, Common Haus Hall, as the name suggests, evokes a Bavarian bierstube.

Be aware, though, that while Common Haus will absolutely satisfy a German-food crave in the space left by Gasthaus, there are significant differences.

Gasthaus was authentic German, run by a German immigrant family. Common Haus is a German-style eatery and pub run by a couple of Hoosier gents who love food and drink. Both Common Haus and Pints & Union spring from the creative mind of restaurateur Joe C. Phillips with Roger Baylor as beer consultant.

“We don’t claim to be German or traditional at all,” Phillips said. “We are influenced by Bavarian range foods. We want to bring our version of Bavarian classics along with modern, approachable Indiana-based items as well. We’re focused on old and new, the past and present. Hence, schnitzel sandwiches!”

Be that as it may, Common Haus feels an awful lot like a Bavarian bierstube to me. The old three-story brick building just north of the Ohio offers three floors and a stack of decks with views of the Louisville skyline.

Pick your floor, settle in with a good German beer and a Bavarian-inspired bite, and you will immediately feel a sense of Gemütlichkeit, the barely translatable German word that encompasses coziness, contentment, warmth and well-being.

The main-floor room accomplished that for me. Warm and friendly service, a Germanic feel in the dim red-brick setting and dark-wood bar, random wall decor a bit more offbeat than the traditional German tchotchkes, culminating in a life-size wooden statue of Francis of Assisi, holding a checkered fedora in his outstretched hand.

Despite the casual feel, Common Haus boasts a serious kitchen run by Executive Chef Jonathan Exum, a Culinary Institute of America grad who was executive chef at Jack Fry’s and worked at Wiltshire Pantry Bakery and Cafe and other local kitchens. This is a serious resume, and it shows in Common Haus’ fare.

The Common Haus beer list features about a dozen German and local craft brews on tap and another couple of dozen in cans and bottles. I enjoyed a refreshing, relatively low-alcohol half-liter of Paulaner Pilsner from Munich ($7.25).

Sauerkraut Balls ($10.50) got us off to a tasty start. Six golden cubes the size of ping-pong balls of tangy sauerkraut, creamy mashed potatoes and blended Bavarian cheeses were cloaked in a perfectly fried, crunchy bound breading, with a tub of bright-yellow, sinus-clearing curry mayo alongside.

Schnitzel — a classic dish of Germany, Austria and Switzerland — is a slab of meat pounded tender and cloaked in a bound fried coating. Common Haus makes a splendid version using pork with six sauce options, all $16.50.

Our Jaeger (“hunter”) style schnitzel had been pounded to about 1/3-inch thick, but it was huge. Served on quality brötchen (small bread), the schnitzel was three times as big as the bun. The well-made breading boosted the flavor with a piquant sweet-sour note. A dollop of Jaeger sauce, a rich brown onion and mushroom gravy with a rich flavor married well with the schnitzel.

“Stadium-style” grilled sausage ($7.50) is available with choice of a half-dozen sausages: bratwurst, frankfurter, weisswurst, knockwurst, Hungarian gyulai sausage or vegan brat. We tried the vegan brat ($1 surcharge) and found it a dead ringer for the real thing, especially topped with sauerkraut and spicy beer mustard on a toasted roll.

Sandwiches come with beer-battered fries, but we upgraded to two premium sides ($1.50 each). Six long, thin spears of white asparagus were grilled just enough to impart a delicious smoky note that went beautifully with a light, sweet-sour dressing.

Haus Spaetzle also offered a good representation of this classic German side: Tiny bits of egg noodle dumplings were tossed in a sweet-sour dressing and sprinkled with chopped herbs.