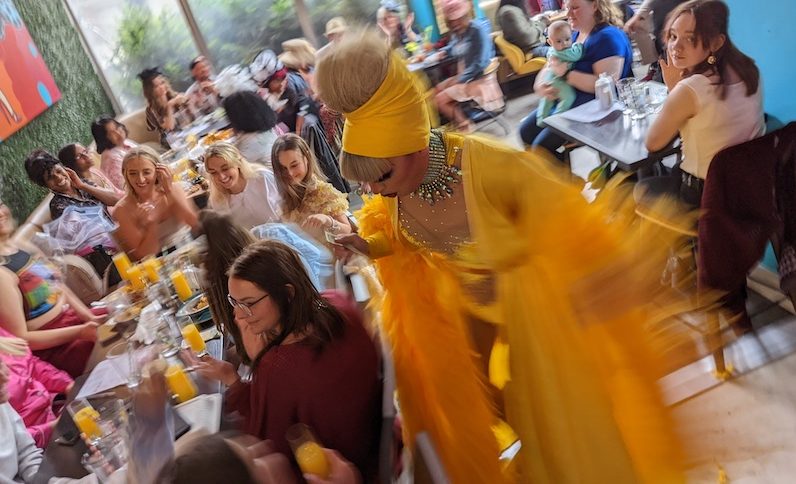 Well butter my biscuits and call me gravy, three of Louisville’s drag brunch restaurants are ranked in Yelp’s 2022 list of “Top drag brunches across the U.S.”

Louisville has always had a strong drag community of performers. Seriously, top notch and it is nice that someone else noticed.

Sorry, New York, Miami and Chicago, but the queens and kings of Kentucky got it going on.

Yelp curates the list identifying restaurant businesses with a large section of reviews mentioning the keywords “drag brunch,” then ranking those by volume and ratings on the reviews. You know, deep science-y stuff.

“Drag brunches at CC’s are a natural extension of what we try to do every time we open our doors,” says CC’s owner and Chef Corey Milliman in a release. “Creating a safe space for anyone who walks in, making them feel welcome and a part of something, is a way to embrace what makes me, my staff and our food so unique.”

“We started as a monthly event, quickly became bimonthly, then weekly,” said Cole in a release. “Currently, we do two shows every Saturday and Sunday. We have an incredible cast of regular performers who contribute so much talent and creativity to the shows.”

Louisville was the first city in Kentucky — and one of the first cities in the South — to pass LGBTQ anti-legislation laws when enacting its LGBTQ Fairness Ordinance in 1999. The city has also received a perfect score of 100% on the Human Rights Campaign’s Municipal Equality Index every year since 2015.

“Louisville has always been known for amazing drag shows and now our city is getting the recognition it deserves,” says Talmage Collins, co-owner of The Hub Louisville in the release. “We started hosting drag brunches in 2018, but recently partnered with one of Louisville’s favorite drag queens, Aubrey Jae, and that has been a game changer.” The Hub’s drag shows aim to benefit the University of Louisville’s LGBT Center.

The three restaurants join other Yelp standouts, Big Bar and Chill Bar, who both made the online review company’s 2021 list of “Top 100 LGBTQ+ bars across the US.”

Learn more about the Louisville LGBTQ scene here and here or just come on to Louisville, Honey. We’d love to have you celebrate Pride month with us.

When are the Drag Brunches?

CC’s Kitchen has them each Saturday and Sunday, The Hub of Louisville has them on Sundays and Le Moo also has drag brunch each Sunday. Most raise money for charities and to fund the performers.