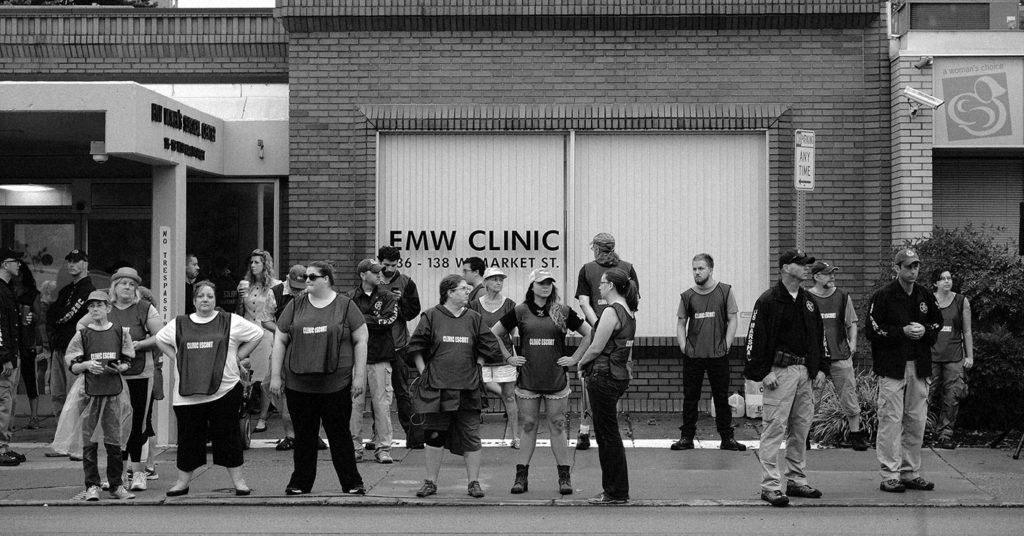 “Until this moment, there was still some hope that Roe wouldn’t be fully overturned. But the draft opinion suggests that the majority of the court is leaning in that way,” said Aziza Ahmed, a professor of law at the University of California, Irvine School of Law, who specializes in reproductive rights. “And in states like Kentucky with the trigger bans in place, we’re going to see basically a complete loss of access to abortion.”

Kentucky is one of 13 states that have a trigger law that would, upon the Supreme Court’s overturning of Roe v Wade, ban abortion. Kentucky’s law, which was passed in 2019, bans abortions except in order to prevent the death or serious risk of death of a pregnant woman. Under Kentucky’s trigger law, any person who performs an abortion or provides medication to terminate a pregnancy can be charged with a Class D felony, which is punishable by up to five years in prison.

Ahmed called Kentucky’s trigger legislation “a particularly cruel law” as it does not provide exceptions for abortions in cases of rape or incest.

A copy of a draft Supreme Court majority opinion that indicated that Roe v Wade would be overturned was published by Politico on Monday night, triggering a political and social earthquake on one of the polarized country’s most heated issues. In the 98-page draft opinion, Justice Samuel Alito wrote that “Roe was egregiously wrong from the start. Its reasoning was exceptionally weak, and the decision has had damaging consequences. And far from bringing about a national settlement of the abortion issue, Roe and Casey have enflamed debate and deepened division.”

The worries about the Supreme Court’s Roe v Wade decision comes just weeks after Kentucky’s Republican-dominated legislature overrode Gov. Andy Beshear’s veto of House Bill 3, a law that the state’s two remaining abortion providers called a “de facto” ban on abortions. Abortions in the state ceased for around a week until a federal judge issued a temporary restraining order blocking the law after Planned Parenthood and the American Civil Liberties Union filed lawsuits against it.

“We’ve already gotten a preview of what comes next in Kentucky as we watched the state go dark for eight days on abortion access because of the sweeping abortion restrictions passed by the Kentucky General Assembly,” said Rebecca Gibron, CEO for Planned Parenthood Northwest, Hawai’i, Alaska, Indiana, Kentucky in a statement to LEO. “What’s coming is dangerous and will open the floodgates for states across the country to ban abortion, devastating communities nationwide.”

In a statement, ACLU of Kentucky communications director Angela Cooper stressed the preliminary nature of the draft opinion, but said the organization was prepared to continue fighting restrictions on abortion.

“The leaked SCOTUS opinion, while troubling, does not change the current abortion landscape in Kentucky. Abortion remains legal and people can still access that care in Kentucky. We don’t know what the final opinion will look like and we are prepared to fight to protect reproductive freedom across the commonwealth,” she said. “If Kentucky’s trigger ban is enacted based on the final ruling, it will be devastating and dangerous for Kentuckians seeking reproductive care. Abortions will always occur — this would only eliminate safe abortions.”

Kentucky’s trigger law going into effect could have wide-ranging consequences.

“The implications for women in Kentucky would be quite dire,” said Jamie Abrams, a UofL law professor whose research focuses on reproductive and birthing decision making. “It aligns with what we’re experiencing now, but it will be deepened and exacerbated because other states that similarly have trigger laws or move to ban abortion rapidly are going to strain to a breaking point the limited states that will be providing services. So it will be a matter of getting women who need healthcare to the states that are able to provide it.”

According to an analysis by the pro-choice Guttmacher Institute, Illinois and Virginia will be Kentucky’s only neighbors that are not certain or likely to ban abortion if Roe v Wade is overturned.

The ability of patients to get across state lines will likely come down to their financial situation, said Ahmed, the University of California, Irvine professor, which could see a further widening of already prevalent disparities.

Abrams, the UofL law professor, said the draft opinion also raised questions about things like equality, rule of law and democratic values — and that language used by Alito in the opinion, such as “abortionist” in reference to doctors and nurses who perform abortions, was inflammatory and dangerous.

“There’s a lot of long-lasting, searing implications of an opinion like this,” she said.