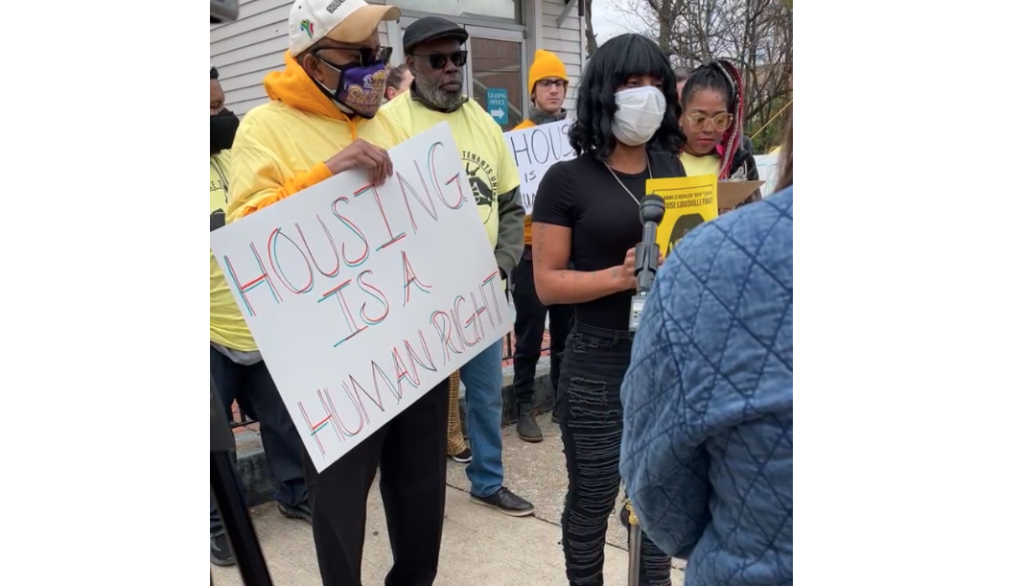 As pressure has been mounting from a group of Louisville Metro Housing Authority residents who say they’ve faced poor living conditions and abusive interactions with a landlord, the company facing their criticism will soon stop managing a significant portion of its public housing units.

The Louisville Housing Authority says that on Friday morning it received an email from The CT Group — a Maryland-based property management company that’s fallen under scrutiny — giving 90 days notice before it ceases managing 185 of the city’s scattered sites units, which will be effective on June 30. The company will stop managing the Walnut, Chestnut and Acorn locations, but will continue to manage the 443 units within Liberty Green and 287 units within the Sheppard Square property, although not all of those units are public housing, as they are market-rate, mixed-income.

There are currently 3,739 occupied public housing units under the Louisville Metro Housing Authority.

Two and a half weeks ago, residents spoke at a Louisville Metro Housing Authority board meeting about dismal living conditions, and their problems with the company’s regional property manager, Kathy Strom. They claimed units had severe black mold and that Strom has both ignored and disrespected them.

Jelisa Chatman, a spokesperson for Louisville Metro Housing Authority, said that the claims are being looked into and taken seriously.

“LMHA leadership is investigating the claims made by two public housing residents who spoke during the March 15, 2022, Board of Commissioners meeting,” Chatman said in a statement. “LMHA takes the concerns of the over 3,700 public housing families it serves, seriously and is committed to working to resolve properly reported complaints in a timely manner.”

Friday also saw the formation of The Louisville Tenants Union. Standing in front of The CT Group office in Sheppard Square, the tenants-led organization lobbying for safe and affordable housing throughout the city, laid out two demands for Louisville Metro Housing Authority at a press conference. The group, whose members were also behind the walk-in at the Metro Authority board meeting in March, requested a meeting with LMHA director Lisa Osanka to demand the removal of Strom, and the relocation of LMHA resident Dominique Harris, who they claim has experienced significant mold and water damage in her apartment.

Holding up a poster of Strom during the press conference, Harris said after a series of bad interactions, she believes the property manager should be fired.

“She just made me and my family and my kids so depressed, oppressed, stressed,” Harris said. “This woman right here has to go. We need her fired.”

The Louisville Tenants Union also gathered resident complaints concerning CT Group and Strom through an Open Records Request. The documents, which have been reviewed by LEO, featured numerous complaints about water, mold and pest issues that residents say were not addressed in a timely manner.

A Jan. 7, 2021, email from a Louisville Metro Housing Authority employee to Strom said that a resident called LMHA because they claimed their sink had been leaking for several weeks, but the Nov. 2020 work order was never completed. A Jan. 26, 2021 email from a city code enforcer to LMHA said that a Sheppard Square resident contacted them because their furnace was blowing out black smoke but said that The CT Group had made no effort to fix it. That same month, a Metro 311 employee emailed LMHA that a resident called to report dirty water backing up in their sink, and that the issue had not been addressed. On Nov. 9, 2021, a Sheppard Square resident wrote an email to Strom saying that they had “lost everything” to a bed bug infestation, and that they had been in a hotel room for two weeks without any communication from The CT Group, and that the situation put strain on their job, college homework and children.

“No one from the office has called or checked on us, and when I call asking information as to what’s going on, I’m given the run-around. I asked to be moved to a different unit and was told no because the waiting list is too long,” the complaint reads.

“This has been a nightmare as I was just getting back on my feet, now I have to start completely over,” the complaint continues. “Could you please reach out to me and let me know how this situation can be handled properly? There’s no way we should have been in a hotel fro 2 weeks with no communication from anyone.”

According to the documents, other residents in Nov. 2021 reported bat, mice and black mold infestations, and said they received no response from management.

The CT Group did not immediately return LEO’s request for comment.

At the press conference on Friday, Shemaeka Shaw, a community researcher and member of The Louisville Tenants Union, said that while a purpose of the group is to take care of people’s immediate needs, the goal is for longterm stability and collective power.

“As an impacted resident, my mission is to create housing for every tenant in Louisville that is safe, decent and permanently-affordable. We believe that housing is a human right, not a commodity. We fight for an end to all evictions and a community control of housing by through the building of tenant power.”