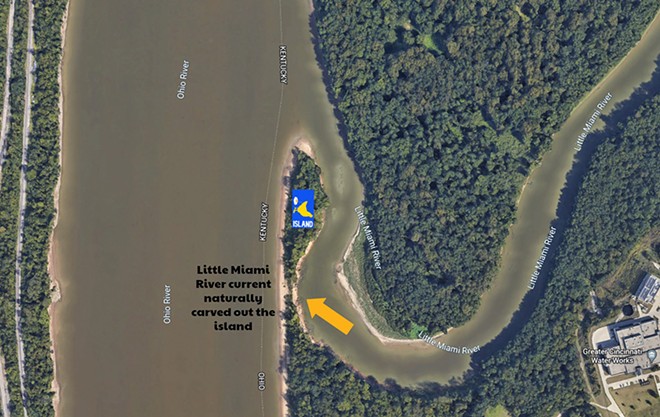 The new island is located at the confluence of the Little Miami River and the Ohio River.Photo provided by the People's Republic of Chicken Island

If you’re looking for a slice of Margaritaville living, there’s no need to make your way to Key West when Cincinnati will do just fine. A new island has popped up at the confluence of the Ohio and Little Miami rivers. Its name? The People’s Republic of Chicken Island.

Is it a real place recognized by any sort of local government entity? Not really, say current self-appointed Chicken Island Mayor Nick Motz and SS Tiki Tours boat captain and island friend Kevin Schmidt in an email to CityBeat.

“The land was previously owned by Cincinnati Water Works. Nick was the first to lay claim to it as an island. Legally, who knows?” they say. “It might not be worth arguing over, though, as it could be washed away in a matter of years, or it could silt in on the other side and become a peninsula again.”

The island was formed during the floods that happened in February and March of this year, the duo says. Right now, Chicken Island is a four-acre oval that measures 300 feet by 900 feet. And Motz and Schmidt are basically Ohio River pirates who have laid claim to it.

Schmidt is no stranger to local boat life. His SS Tiki Tours company rents out an 18-person capacity BYOB party boat, complete with a bar set-up, bathroom and solar-powered tiki torches, all decorated with a Jimmy Buffett theme (and at least one pirate flag). Motz, who is nicknamed “Chicken Nick” because of his family’s Motz Poultry business, is known for helping to redevelop parts of the East End — and also for claiming and naming random local islands.

The duo says Motz actually “discovered” — or knew Chicken Island was forming — “years before it became an actual island.” Schmidt says Ohio River boaters have already been beaching vessels there for decades; Motz was just the first to plant a flag on the island.

According to their email, Motz is the current “rightful owner of the land” and will served as Chicken Island’s mayor until an official election can be held.

“We are just having fun with it and hoping to build a community of good will around it,” the duo says. “Maybe Cincinnati City Council could step in and declare Nick to be the rightful owner, or maybe CWW will be killjoys and put up no trespassing signs. Who knows?”

In a release, the duo says regardless of the outcome, they want everyone to enjoy the island, adding, “Chicken Island will be a destination location for the local boating community. It has sandy beaches, picnic area, bonfire pit, overnight camping. There will soon be a hidden geocache to discover on the island along with picnic tables, etc.”

When asked about who will be adding the picnic tables, they say they have zero plans to actually install any amenities. But Schmidt says, “If anyone does put a picnic table out there, I would suggest they chain it to a tree so it doesn’t drift away in the next flood!”