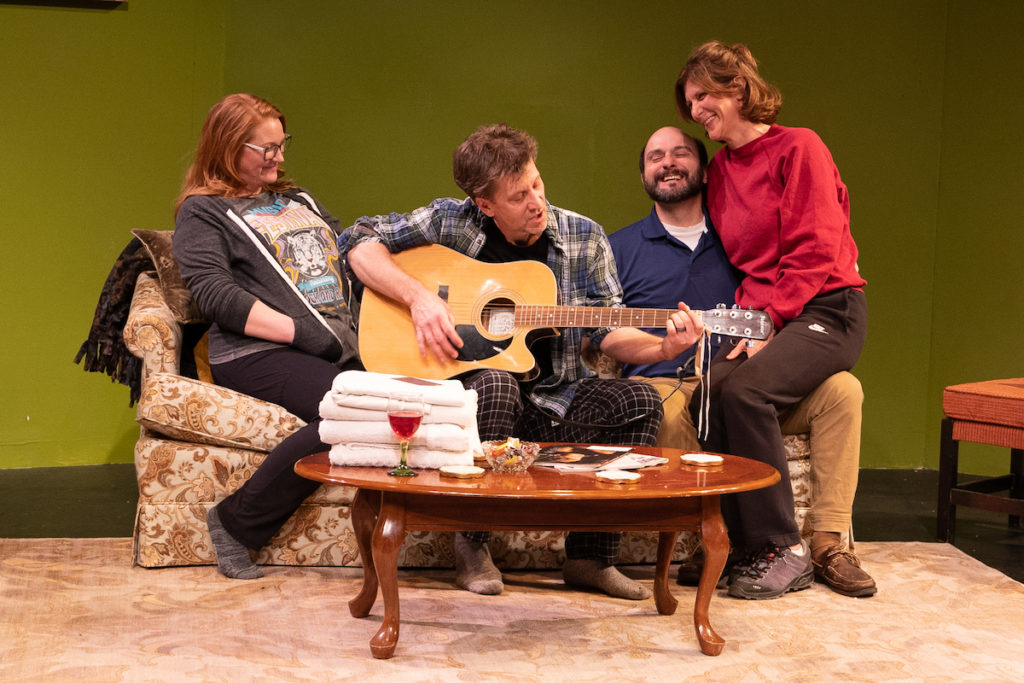 Take a wild and witty ride with Liminal Playhouse’s “How to Transcend a Happy Marriage.” Photo by Bill Brymer

Most modern Americans inhabit a world of abstractions. Our dwelling spaces are bounded by perpendicular sheets of drywall. Our views of the outer world are decoratively framed – and the outer world’s gaze into our space is carefully controlled by curtains and privacy glass. Even our diets are largely abstractions: store-bought vegetables rinsed clean of soil; meats rinsed clean of blood and carved into the geometry of convenience.

But just beyond the boundary of those abstractions lies a world fraught with primordial fears and anxieties: darkness, chaos, alien ideas and blood.

Since its ancient beginnings in Athens, western theater has been particularly obsessed with that border and the trespasses and trespasses that arise when it is breached — in either direction.

Since its inception, The Liminal Playhouse has been especially focused on producing plays that explore those kinds of trespasses. In fact, that notion is built into the company’s name, which invokes very specifically the rich mysteries of these borderlands.

If you have yet to see a Liminal production, the current run of Sarah Ruhl’s “How to Transcend a Happy Marriage” is a brilliant place to start.

Some decades back, a critic caustically noted that the typical Actors Theare of Louisville Humana Festival production featured a group of people sitting around a table making decisions — and one of the sly elements of “How to Transcend a Happy Marriage” is exactly that: much of the action does involve a group of prosperous folks chatting in a cozy living room — except that if you look closely at Karl Anderson’s cunning set design, you realize it’s not quite as cozy as it seems, and the very borders of the space hint at something wild.

But before we get to the living room, the action opens on a faintly illuminated scene where a woman stands for a moment over the carcass of a creature it appears she has just killed.

Then the lights come up and we enter the well-lighted comfortable room where two couples, George and Paul (Susan Linville) and (Gerry Rose) and Jane and Michael (Heather Green and Scott R. Davis) are sharing a meal — and workplace gossip.

Jane’s gossip is about a temp at her office, a woman who lives in a polyamorous relationship with two men, David and Freddie.

That tantalizing bit of news leads to a droll technical discussion of polyamory logistics (who exactly sleeps with whom and how?).

But before long, Jane escalates the gossip. Pip, it turns out, was once a vegetarian, but now is an ethical carnivore: she only eats meat that she herself slaughters.

That places us squarely in comedy of manners territory. It’s a contemporary scenario with roots in Oscar Wilde, Moss Hart and George S. Kaufman, and the screwball comedies of the ‘30s and ‘40s. What could be more fun than witty people talking about group sex and slaughter? And under the fast pace set by director Tony Prince these  four actors — Linville, Rose, Green, and Davis — are wonderfully blithe masters of madcap. Before long — after a discussion of scheduling difficulties — they decide to invite Pip and her partners for dinner on New Year’s Eve, and Paul pledges to slaughter a duck for the feast.

The New Year’s Eve party brings Pip (Megan Adair) and her partners David (Neil Brewer) and Freddie (Spencer Korcz) to the house, and what ensues is cocktail party banter spun from comic gold. Adair plays Pip as a matter-of-fact pragmatist — a sturdy, straightforward, astute counter to whatever fantasy the two husbands may harbor. David, played by Brewer with a mysteriously cosmopolitan accent, turns out to be a mathematician with an interest in Pythagoras (students of classics will know that Pythagoras was an ardent vegetarian). And Freddie is a person who collects garbage — but never generates any, because he never throws anything away.

Eventually the bantering, flirting, posturing (and karaoke) culminate in a drug-laced Bacchanalia that culminates in scandal and pain when Michael and Jane’s child Jenna (Nick Schaffner) arrives home to find the adults in transgression.

Transgression leads to transgression, including a strange hunting escapade that lands George and Pip in a jail cell — another screwball comedy trope — and eventually to an odd, redemptive metamorphosis.

All in all, it’s a wild and witty ride that is finely executed both onstage and backstage. Technical credits include Lindsay Krupski’s effective lighting; Tony Prince’s costumes; Richard McGrew’s sound (and stage management), and Todd Almond’s Karaoke music.

“How To Transcend a Happy Marriage” will be performed through April 3 at Henry Clay Theatre (604 S. 3rd St.). Tickets are $20. Times vary. For more info, visit theliminalplayhouse.org.