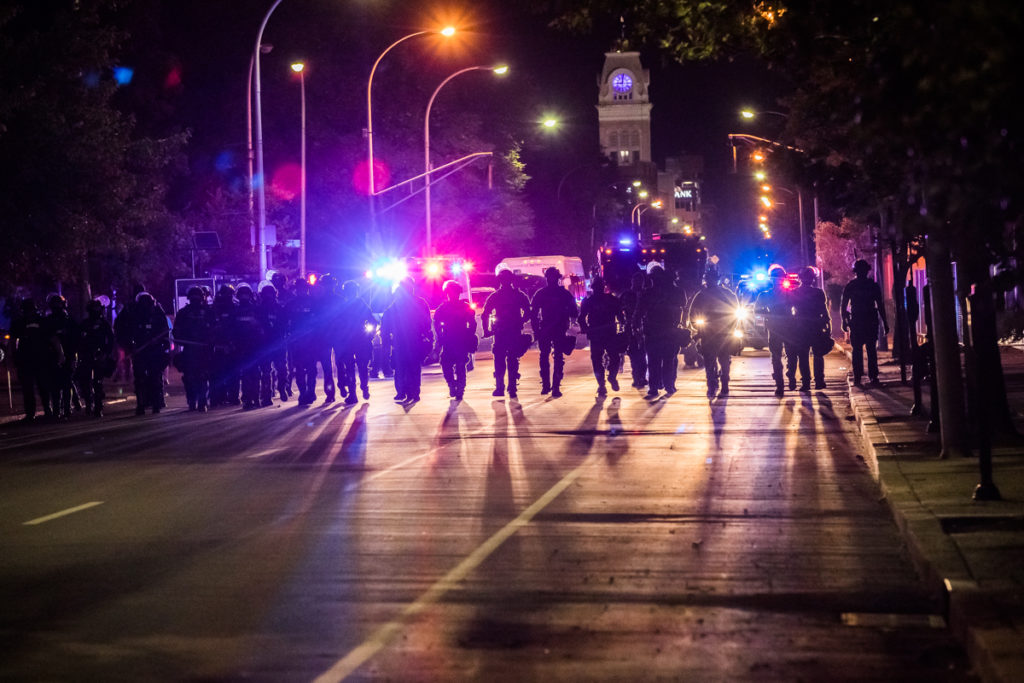 Louisville police during the Breonna Taylor protests.Photo by Kathryn Harrington

A slideshow used by Louisville Metro Police in a 2017 firearms training used a controversial Bible verse to imply that police officers are avengers tasked with carrying out God’s wrath on wrongdoers.

In the 2017 presentation, used in one of two weapons qualifications that LMPD officers are required to take part in every year, the words of Romans 13:4 appeared superimposed over a “thin blue line” flag — a black and white version of the U.S. flag that features a solitary blue stripe and is associated with supporting the police.

The verse that appears on the image of the flag reads: “For he is God’s servant for your good. But if you do wrong, be afraid, for he does not bear the sword in vain. For he is the servant of God, an avenger who carries out God’s wrath on the wrongdoer.”

The blue line on the flag highlights the words “an avenger who carries out God’s wrath.”

To Andrew Whitehead, an associate professor of sociology at Indiana University-Purdue University Indianapolis and the co-author of “Taking America Back for God: Christian Nationalism in the United States,” the messaging conveyed by using the verse in the training has potentially dangerous consequences.

“It just seems really dangerous to kind of inculcate this idea that they are agents of God and God’s wrath. As citizens, that’s worrisome with what we’ve seen in the past with policing,” he said. “If there are police officers that see themselves as agents of God’s wrath, will they be more likely to turn to violence in a situation rather than not? I think those are questions that should be asked by them and hopefully other citizens.”

F. Bruce Williams, senior pastor at Bates Memorial Baptist Church in Smoketown, found the use of the verse by LMPD disturbing and described it as an example of “weaponizing scripture.”

“Given the long, nightmarish history that Black people have not only with LMPD but with police departments in general, that’s a very scary prospect to have a Bible verse like that and to describe the police force as the wrath of God to carry out justice on evil doers,” he said. “For me, it’s more evidence of what’s kind of in the DNA of America. And that is a history of weaponizing scriptures to justify violence sometimes and damnable ends.”

The larger Romans 13 chapter of the New Testament has frequently been the subject of debate and differing interpretations. At times over the course of history, the chapter has been used to defend authoritarianism.

Also critical of the materials was Aaron Griffith, a history professor who focuses on religion at Washington’s Whitworth University and the author of the book “God’s Law and Order: The Politics of Punishment in Evangelical America.”

“I think the assumption here is that officers can feel justified in using their firearms. That it is not only something that professionally they might be required to do, but that in fact, this is their God-ordained, divinely-supported role,” he said. “And of course, the problem with that is it becomes a way to uncritically justify the use of force.”

Griffith, who has previously written about the invocation of Romans 13 as it relates to police, added: “Whoever did this is glossing over how complex this verse is, how complex that passage of scripture is and how contested the role of the police and the state itself — and the state’s ability to use violent force — has been within Christian tradition for centuries.”

The slide with the Bible verse appeared at the end of a 39-slide presentation used in the mandatory Spring 2017 firearms qualification. LMPD officers are required to undergo qualification on their service weapons twice per year, once in the spring and once in the fall.

The other slides in the presentation deal with things like firing range safety, procedures for firing handguns in low-light situations and recent changes to LMPD policy.

The presentation was included among some 2,292 pages of training-related documents released by LMPD in 2020 when it made the Public Integrity Unit investigation into the shooting of Breonna Taylor public. Slideshows for firearms qualifications for Fall 2018 and Fall 2019, which were also included in the document cache, did not include the Bible verse.

The Spring 2017 presentation has also been filed as an exhibit in a federal lawsuit against LMPD officers by Taylor’s neighbors, whose apartment was struck by bullets fired by former LMPD detective Brett Hankison during the botched raid on Taylor’s apartment. LEO learned of the presence of the Bible verse in the training slides during a conversation with Jeff Sexton, the lawyer for the neighbors.

Last year, LEO reported on an LMPD recruit basic training course that aimed to have students be able to “identify aspects of Hispanic/Latino culture that may pose hazards to law enforcement.”

Over the course of history, people defending those in power have latched onto interpretations of Romans 13 that say God ordained government. In the U.S., it was used by monarchy loyalists in the late 18th century to oppose the American Revolution. Later, in the run up to the civil war, it was used to defend slavery in the South.

“This is invoked when you have an authoritative body — a government or an agent of the government — who wants to put down dissent,” said John Fea, a professor of American history at Pennsylvania’s Messiah University who has written about historical uses of Romans 13.

Most recently, in 2018 then-U.S. attorney general Jeff Sessions used Romans 13 to defend the Trump administration’s practice of separating migrant families at the southern border and pursuing charges against those who illegally cross the frontier.

“I would cite you the Apostle Paul and his clear and wise command in Romans 13, to obey the laws of the government because God has ordained the government for his purposes,” said Sessions in a 2018 speech as he defended the Trump administration’s border policy.

In 2016, a police department in a small Kansas town removed decals reading “Romans 13:4” from patrol vehicles after complaints by the Freedom From Religion Foundation, a nonprofit that promotes the separation of church and state.

“There was something alarming about an official allusion to a verse that talks about ‘revengers,’ ‘bearing swords’ and ‘executing wrath,’ when the job of the Harper Police Department is to protect and serve, not mete out biblical punishments or divine anger,” the Freedom From Religion Foundation wrote in a press release at the time, referencing a different translation of the verse.

In an email to LEO, ACLU of Kentucky legal director Corey Shapiro said his organization “strongly disapproves” of LMPD’s use of the Bible verse in training materials.

“The inclusion of the religious reference disrespects the diverse religious views of the population. LMPD should reflect the rich religious diversity here in Louisville, and not make officers with a different faith feel excluded,” he said. “More importantly, public agencies should not be promoting or choosing one religious message over another. The First Amendment prevents LMPD from having an official religion, and yet this training material inappropriately suggests that this particular Bible excerpt reflects the official views on which LMPD officers are trained.”