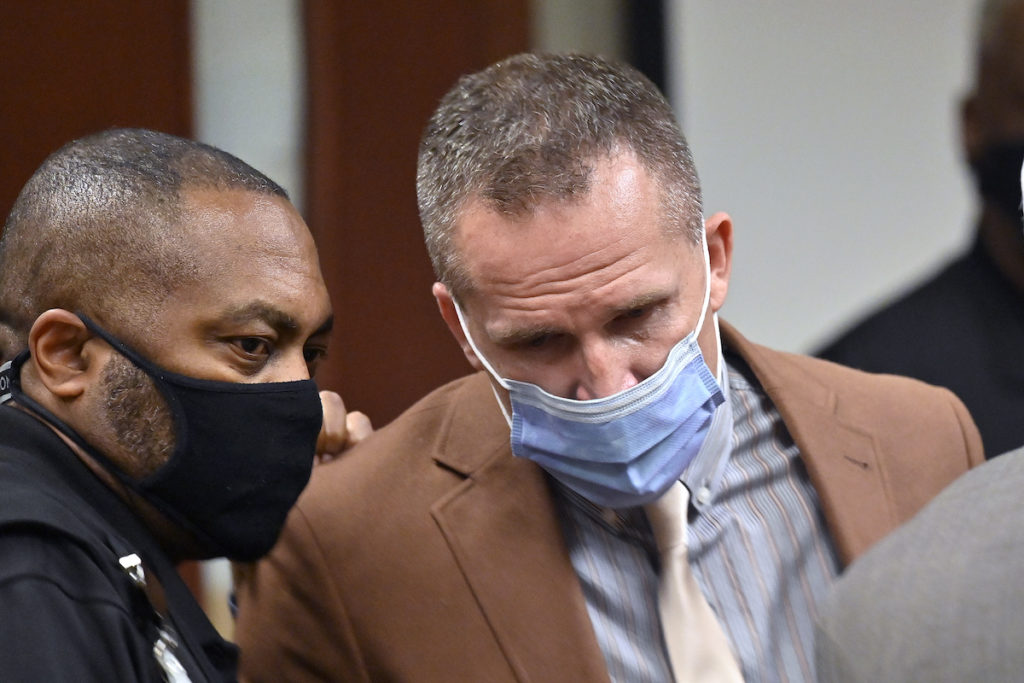 After a six-day trial, former LMPD detective Brett Hankison has been found not guilty on all three counts of wanton endangerment.

The verdict was met with what appeared to be a stunned silence by a small number of activists gathered in the courtroom. Security was heavy, with LEO counting at least nine sheriff’s deputies in the room.

Hankison was charged with three counts of wanton endangerment from shots he fired during the March 13, 2020 LMPD raid that killed Taylor. His charges were not for her death, but rather for shots he fired that went into a neighboring apartment where three people were present. On June 19, 2020, it was announced that LMPD would fire Hankison. A termination letter from then-acting chief Robert Schroeder said Hankison’s actions during the raid “displayed an extreme indifference to the value of human life” when he “blindly fired ten rounds” into Breonna Taylor’s apartment. Schroeder added that the patio door and window which Hankison fired through were covered in a material that “completely prevented” Hankison from identifying a target.

Ahead of deliberations, three of the fifteen jurors were selected at random and declared to be alternates who would not rule on the case. The final 12 person jury was composed of eight men and four women. At least two of the jurors were people of color. The jury took around three hours to reach the verdict.

During closing arguments, prosecutor Barbara Whaley said Hankison fired “wildly” and in the “wrong direction” during the botched 2020 raid on Taylor’s apartment and endangered the lives of the man, woman and 5-year-old child in the apartment next door to Taylor, who saw their home hit by bullets fired by Hankison.

In brief closing arguments that lasted just 24 minutes, defense attorney Stew Matthews said Hankison did what he had to do that night to preserve the life of his “brother officers” in a situation in which he believed he was facing rifle fire.

Outside the courtroom, after the verdict was delivered, Matthews told reporters: “Justice was done.” Matthews added that Hankison was “doing his job as a police officer” during the 2020 raid on Taylor’s apartment. He went on to blame the situation on Taylor’s boyfriend, Kenneth Walker, who fired a single shot from a 9mm pistol as police breached the door, hitting Sgt. Jonathan Mattingly.

Exiting the courtroom, prosecutor Barbara Whaley said: “We respect this jury’s verdict.” She declined to answer questions about how the Commonwealth went about prosecuting the case during the trial, which included a lot of time spent on establishing events leading up to the raid and not solely Hankison’s actions that night.

Frederick Moore, an attorney who is part of a team representing Taylor’s boyfriend, Walker, in suits against the city and police officers over the raid, said the prosecution never reached out to have Walker testify in the case.

“That obviously was the first in a series of bizarre strategy choices that the Attorney General’s Office used in this case,” he said. “So the verdict isn’t shocking given those strategy decisions that they made.”

Moore was also critical of how the prosecution presented their case, devoting a lot of time establishing that police knocked and announced their presence before the raid on Taylor’s apartment and introducing commendation letters for Hankison as evidence.

“The story they promoted and pushed through this trial is part of the same narrative that Attorney General [Daniel] Cameron had had from the beginning,” he said. “And they pushed that story to the detriment of the case.”

In a statement, Mayor Greg Fischer said that, “While I appreciate the work of the jury, today’s decision adds to the frustration and anger of many over the inability to find more accountability for the tragic events.”

He also “the fact remains that [Taylor] should not have died that night,” and that metro government will “remain focused on ensuring this never happens again,” pointing to city reforms including the ban on no-knock warrants, the Civilian Review and Accountability Board and changing tear gas usage practices.

After the verdict, Ju’Niyah Palmer, Breonna Taylor’s sister — who attended much of the trial —said that she was heartbroken by the verdict.

On Twitter, activist, poet and occasional LEO contributor Hannah Drake said: “I honestly don’t have the words. What more can be said that we haven’t already said? I can’t even say Rest In Peace because this city never gave #BreonnaTaylor any. Even in death.”

Former LMPD Sgt. John Mattingly — the officer who was shot during the raid — tweeted out, “Not Guilty! Thank you Jesus!”

Not Guilty! Thank you Jesus!

As the verdict came in, downtown Louisville appeared to be quiet. Unlike in September 2020, when the Attorney General’s Office announced charges — and the lack of charges for other officers — there were no concrete barriers blocking off major thoroughfares or checkpoints manned by LMPD officers. Additionally, no protesters appeared to be present in front of the courthouse or a block away in Jefferson Square Park, a plaza those calling for justice in Taylor’s death renamed Injustice Square, and a place where lamppost signs still bear the 26-year-old Black woman’s image and exhort passersby to “say her name.”

For LEO’s coverage of the entire trial, go here.