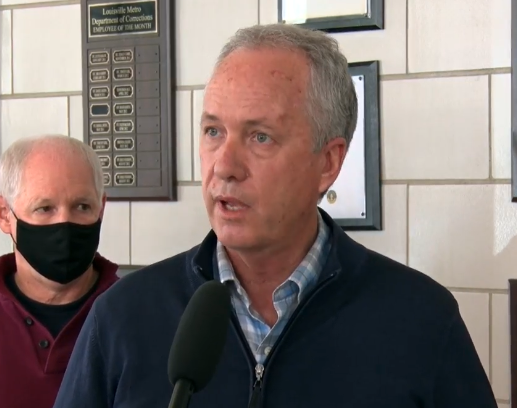 Another inmate has died in Metro Corrections, which is the sixth death at the jail since November.

Early Sunday morning, a DOC officer making rounds discovered that an inmate had attempted suicide by hanging. The inmate was administered life-saving measures and transported to UofL Hospital, where he was pronounced dead around 1 a.m.

The mayor’s office and Metro Corrections said that they have been trying to solve staffing issues at the jail and will “improve conditions” to address the ongoing problem.

At a press conference on Sunday, Mayor Greg Fischer said that “we know we have a staffing problem,” but he said the city has been addressing the deadly situation by raising salaries for current corrections employees, launching incentives to help attract new employees and enhancing medical and mental health care.

Fischer also said that the city has been working to reduce the jail’s population, which has dropped from 1,665 to about 1,450 in the last five months, he said.

The mayor mentioned that Metro Corrections is working with his office to develop a Public Services Task Force “to assist corrections and accelerate needed change,” the details of which will be announced in the coming weeks.

“So, obviously, this is concerning,” Fischer said. “We all understand. And we’re trying to figure out why are all of these deaths concentrated in this short period of time. Is there some systemic failures? Process failure? Or is it just a really unfortunate situation when a person decides to take their life, and then how do you intervene at that time of sadness that is going on.”

Of the six recent deaths, three were caused by suicide, Fischer said.

“I’ve asked LMPD to accelerate their investigations,” Fischer said in a statement. “If it is determined there is a pattern to these tragic recent deaths, we will open further investigations.”

“It’s concerning, and that’s why I want to assure you that my staff is working hard each day, examining our processes, and seeing what we can do to improve on our processes,” he said.

In response to the jail deaths, the ACLU of Kentucky and other organizations have asked Metro Corrections to enforce its current contract with Wellpath Medical services to support people in the jail who have substance use disorders.

Clark said at the press conference that its 12-person Wellpath team has three vacancies currently.

Mike O’Connell’s office told LEO in December that it is already standard procedure to not routinely request bench warrants for nonviolent offenders.

Last week, three Metro Council members introduced an ordinance calling for a “no-confidence” vote in Clark as the director of the jail.

“The jail is understaffed and overcrowded, and that is creating a dangerous scenario for both the officers and inmates,” said one of the sponsors, Amy Holton Stewart, D-25. “Despite Metro Council making every effort to work with the Metro Corrections administration, Director Clark is failing to prioritize positive changes with any sense of urgency. Metro Council needs to send a clear message that we no longer have any confidence in Director Clark’s leadership.”

Council President David James, who also sponsored the ordinance, attended the press conference on Sunday, tweeting out: “At Metro Corrections as Mayor Fischer discusses the 6th death of a incarcerated resident at the Louisville Metro Corrections Facility. 6th death since November. Unacceptable!!”

In a press release sent out Sunday, Clark said that he has no plans to step down.

“I have no intention of resigning from my position leading our jail,” Clark said. “My intention is to keep pushing forward and building upon the good work we’ve done over the past few months.”

In that same press release, the mayor voiced his support for Clark.

“The thought that one person can resolve the issues facing our jail, is simplistic and shortsighted,” Fischer said. “That’s why we have been working with Director Clark and his team on innovative approaches and alternatives to keeping our inmate population and employees safe.”

During the timeframe that the inmate death occurred on Sunday, the city claims that preliminary reviews indicate that the dorm in question was fully staffed and protocols were observed. But, in a text message sent to the Courier Journal on Sunday, FOP Lodge 77 President Daniel Johnson, from the union that represents the jail’s staff, said that “each floor in the main jail complex was running at least 1 position vacant.”

In that text message to the CJ, Johnson also said “6 of the 8 officers were on forced overtime from the previous shift.”