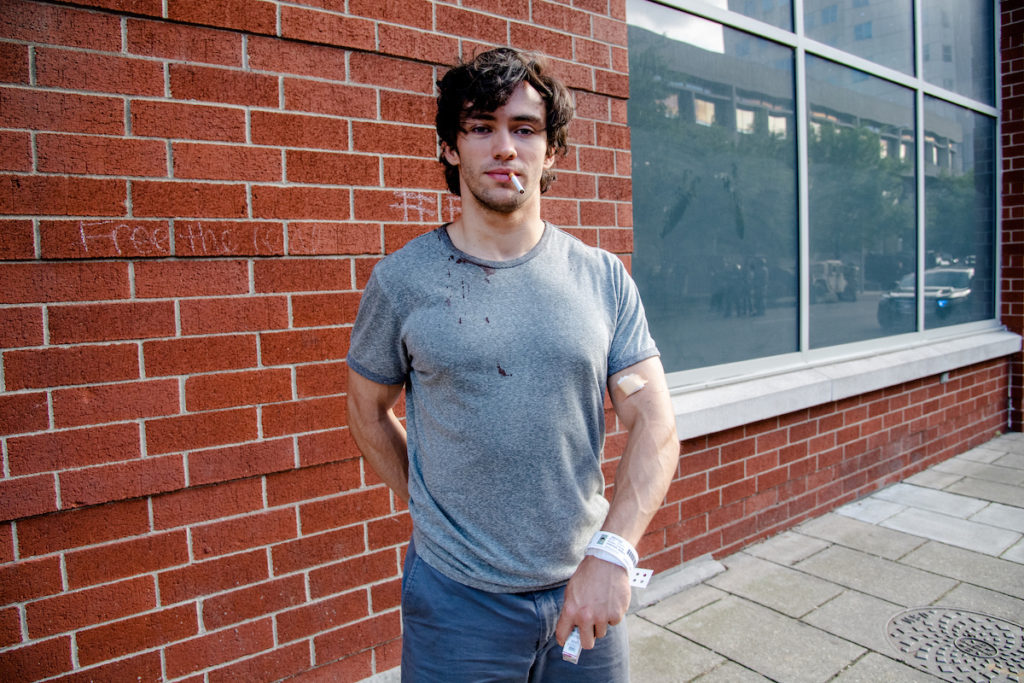 Marty Chester after being released from jail, covered in blood from being struck by a police baton.Photo by Amy Harris

Like many college students, Marty Chester was back living at home with his parents in the spring of 2020. The COVID-19 pandemic had forced the duPont Manual grad back to Louisville from Chicago, where he was majoring in theater at DePaul University. With the pandemic pausing life, 2020 felt like everything was collapsing in on itself. He felt like he had lost purpose.

Then the protests over the LMPD killing of Breonna Taylor began. Appalled, shocked and outraged, he took to the streets.

On his third night protesting, May 31, he was on his knees attempting to surrender to police when LMPD Officer Cory Evans struck Chester in the back of his head with a riot stick.

Evans initially told his supervising sergeant that Chester had hit his head after being pulled down from a fence he was trying to scale to evade arrest.

Chester lost hearing in his left ear for a week. In the aftermath of the blow, he also suffered from hearing impairment, nausea, dizziness and what he believes to be undiagnosed PTSD.

On Tuesday, Feb. 1, Evans was sentenced to two years in federal prison for deprivation of rights under the color of law. He had previously pleaded guilty.

“Evans abused his authority by violently retaliating against a surrendering arrestee who had been exercising his First Amendment rights,” said Kristen Clarke, assistant attorney general for the Justice Department’s Civil Rights Division.

While he pleaded guilty, and expressed regret in court, Evans appeared unrepentant in a TV interview that aired after the sentencing, saying that surrendering protesters might not actually be surrendering and that he did not trust protesters to “do the right thing.”

After the sentencing, Chester, now 23, spoke to LEO. This is his story.

Marty Chester: At the protests, I saw a lot of likeminded people like myself who were just very upset about what was going on. All the rage and frustration I was feeling — it felt justified being down there with other people, because it was like: you’re not alone in this feeling, other people also see this as an injustice.

There was a great community presence there. People were handing out snacks and water and stuff like that. There were people that had volunteered as medics. It was a moment that gave me a lot of pride. Because Louisville knows — Louisville knows — that what happened was wrong. And I thought that was a very powerful moment for me as a native of this city.

On May 31, I’d been protesting most of the day. I had taken some breaks here and there. But then me and my cousin had gone out again prior to the curfew. We gathered with this group of people, and we were marching all over the city. We were walking for a couple hours.

Once we made it to the intersection where everything took place, I was already feeling a little suspicious because there seemed to be a large police presence all around us. It felt like they were coming into us. So right away, alarms were blinking in my head like, ‘Uh oh, something that isn’t good is going on.’

We tried to move down an alley to get around the police.

It felt like I was in a movie: All these vans pull up and out of them jump, I want to say upwards of 30 or 40 National Guardsmen or police officers, fully armed; they all had rifles and everything like that. And they just started shouting at us: ‘Disperse! Disperse!’

For me, I was like: ‘Okay, I need to get out of this crowd, because I could get hurt right now. People are panicking. Something might happen to me.’

I go out into the street, and I see this line of police officers coming towards me.

I was alone on the streets surrendering. There was no one around me. No one was fighting any police or anything like that. I was attempting to peacefully surrender into police custody, because at that point I’d already known I was going to be arrested.

Police are screaming the whole time, but the next thing I feel is this thud on the back of my head, like the hardest crack I’ve ever experienced on my skull. And I immediately see stars. I think I might have gone unconscious for a second because the next thing I know, I’m being carried by five or six riot gear police officers.

I can already feel my head bleeding out. I’ve got a gash on the back of my skull, and it’s just gushing blood.

They set me down on the the sidewalk next to a bunch of other people that they had arrested. My biggest concern was that I needed to be treated. I’m just begging the officers the whole time. I’m like, ‘Please, please, please can you just please let me get medical attention? I just need to go to the hospital. I’m not trying to do anything. I will stay in your custody. I’m just trying to get something taken care of with my head.’

And they’re talking amongst each other. There’s not an ounce of sympathy that any of these cops are showing me; they’re treating me like I’m an animal.

I was trying to be a lifeguard at one point in my life, so I’ve done some medical training and like EMS work. The biggest thing I know is that head trauma — that’s a red flag. That’s a serious, serious injury. And I’m bleeding out the back of my head. So I’m just terrified this whole time. I’m trying to communicate, but it just fell on deaf ears.

I want to say it took 15 or 20 minutes of just begging people until finally an EMS shows up and doesn’t even patch me up.

LMPD grabbed me and put me in the back of a police van they use for mass arrests. I get taken to the jail downtown. They’re putting us through processing, but I’m still bleeding out of the back of my head, I can’t focus, I have this insane headache, I was deaf in my left ear. And then finally, after two hours since I’d been whacked and gone through processing, a nurse finally sees me at the police station and she’s like, ‘What have you guys been doing? You need to get this guy to a hospital right now.’

They took me back to jail after. They kept me in custody all night and they kept me through most of the day. I ended up at getting out of jail at 6 or 7 the following evening.

I think I might have had some undiagnosed PTSD from the situation. I commend my parents for their love and support of me during that time because I was very angry, very upset, I was sad very, very often.

I didn’t go out protesting again. It’s intimidating, man. Getting your head beat in by a cop at a protest, that will take it out of you.

I knew right away that I wanted to report this. My mom was very hesitant because she knew how police officers can be and how police officers treat their own — and not only would it be ineffective, but that there might be some kind of retaliation against us for speaking out against a police officer like this. But, I felt like this was important. How many people don’t report police for bad behavior?

I never saw the officer’s face. I couldn’t get a badge number. My brain was scrambled in the moment too, so I barely remember who I was talking to — anyone’s name from that night. I had accepted the fact that nothing may come out of this.

Many, many months passed. It was a year and maybe a month or two before we heard from the DOJ. When they told me that they found the guy, first of all I was surprised; I couldn’t provide a name, and I could barely provide a description because all the cops looked the same in their riot gear.

I was gracefully allowed to speak before the court the other day, and the thing I touched upon was how Cory Evans had taken my voice: In a way, he had intimidated me, he had scared me. Even now, I’m hesitant to use my First Amendment rights, I am nervous about maybe joining another protest in the future. And I might not get so lucky next time. I don’t know if what happened that night happened to me again if I’d be alive afterwards.

His attack on me was a deliberate attempt to hurt someone. I can’t tell you why he did it. Don’t tell me that people are falsely surrendering. Where is the evidence of that happening? What did I do prior to that to insinuate that I was going to hurt you? I had been on my knees well before you approached me. I think that’s bull crap.

Honestly, I’m pretty satisfied with the sentencing. Obviously, I would have wanted a full sentence — like if he had gotten 10 years, I wouldn’t have been upset. But I am satisfied. I wasn’t expecting him to serve any kind of jail time. I was really nervous that he was only going to get probation. I think he’s getting the punishment that he needs.

Part of the thing I was out protesting for was to see if the justice system works. And I think here, in my case, it did. I think this is a great example of what our justice system can stand for and why it can be one of the best things.