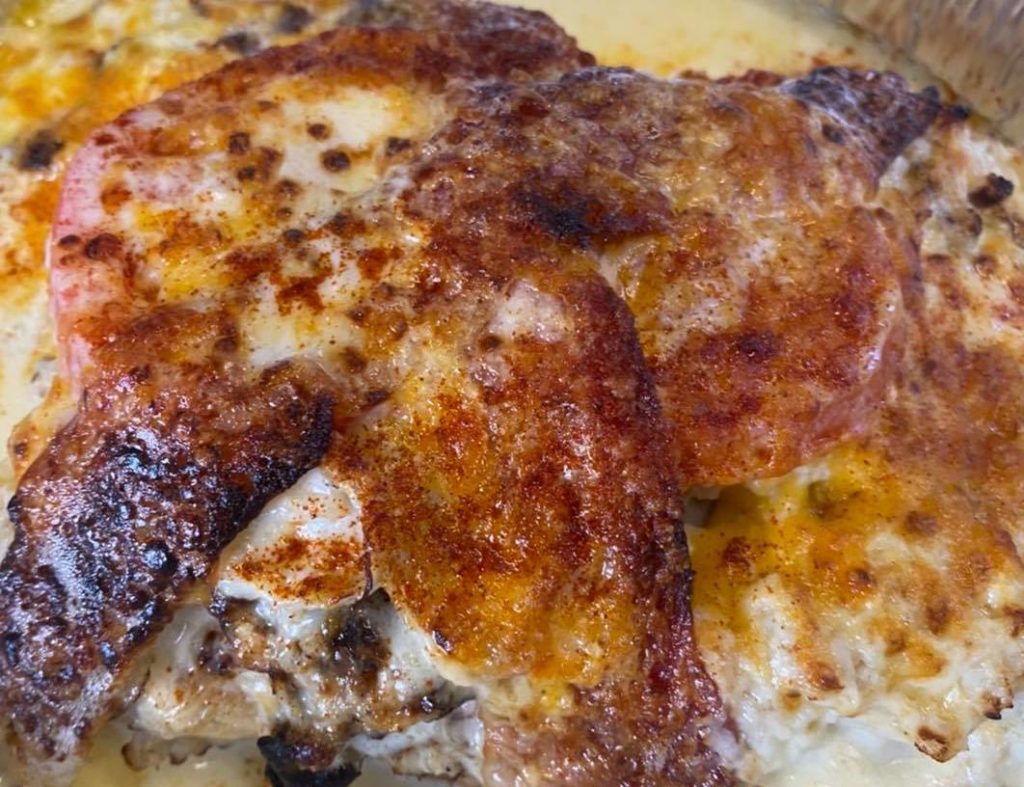 Bob Raymer, the owner of Gorilla Bob’s Grub Shack in Southwest Louisville, travels across the country as a custom car builder. And in each city, he always has to try the specialty.

His menu at Gorilla Bob’s is packed with them: a Philly cheesesteak that he promises is a twin of one that you would find in the city of brotherly love, a Cuban just like the kind he’s indulged in on trips to Miami.

And, of course, since his roadside shack is located in Louisville, a hot brown that rivals that of the Brown Hotel.

In fact, Raymer has had customers tell him it’s the greatest they’ve had in the city, leading him to hang up a banner on the side of his purple shack proclaiming it to be the home of the “Best Hot-Brown In The Ville!”

The only thing that Raymer says differentiates his offerings to those of the cities they belong to is, “everything I serve is huge.”

Almost all of Gorilla Bob’s menu items are accompanied with a description of their size: A seven-ounce bronzed turkey for the hot brown, four two-ounce beef and pork meatballs for the appropriately named Massive Meatball sub and a full pound of fries “topped with chorizo sausage, jalapeño mango chicken, philly steak, roasted green and red peppers, roasted onions, mozzarella cheese and cheese whiz” for a dish called Trailer Trash —  “NOT for the weak of heart or stomach,” the menu warns with several eye-catching asterisks. All sandwiches come with a pile of fries.

“If you’re looking for a salad or a healthy option, I’m not the place,” said Raymer.

Opened in January of 2021 in front of a shopping plaza off Terry Road on the border of Pleasure Ridge Park and Valley Station, Gorilla Bob’s has attracted what Raymer’s sales reps tell him is a cult following. (Raymer plans to hold some type of one year anniversary event this month.)

Raymer sees Gorilla Bob’s as offering something different to the citizens of Southwest Louisville, which he has called his home since 1998.

When he moved to the area, Raymer told his mother-in-law at the time that his dream was to open a roadside taco hut. But, in the year’s since, Southwest Louisville has become home to a kingdom of Mexican restaurants. So, Raymer’s dream took a turn. Instead, he decided he wanted to open something that didn’t just serve tacos or barbecue or fried chicken or country fixin’s.

In 2018, he fulfilled that goal when he opened Highway 31 Diner and Dive, an eclectically-decorated low-rider inspired diner. But, it shut down within nine months.

“I had a partner. It didn’t work out between us,” said Raymer.

Next, Raymer opened up what amounted to a concession stand inside Zenith Logistics, a Kroger distribution center. But, he still wanted his roadside shack.

He signed the lease on the Gorilla Bob’s building on March 16, 2020 at noon. Only a few hours later, Gov. Andy Beshear issued an executive order, shutting down restaurants to in-person dining.

Raymer spent the downtime painting the building and fixing up the shack’s outdoor seating area, outfitted with picnic tables, a shelter and fairy lights.

In the winter, he was able to finally open. By summer, he was selling close to 100 hot browns a day. At the time, Raymer would often sell out before the shack’s 8 p.m. closing time. He still does, but he’s also learned how much of his supplies to stock to prevent shortages. Today, Raymer recommends getting to his shack by 6 p.m.

On Sunday, Raymer announced that he’d be raising Gorilla Bob’s prices, a result of his supplier raising theirs. But, for those who get “sticker shock,” he recommends considering the size of your portion. One meal at Gorilla Bob’s can easily stretch into two days worth of delicious, carb-laden brunches.