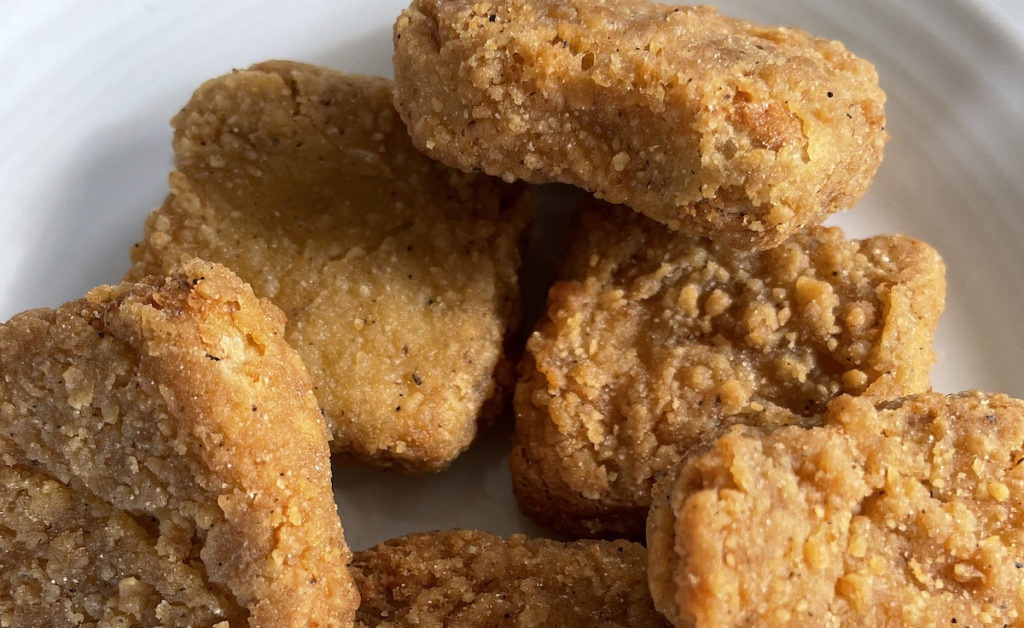 If you still think the recent wave of faux meats made from plants is just a passing fad that won’t last, consider this: Last week, KFC rolled out Beyond Meat’s new meatless chicken nuggets for a short-term test at all 4,000 U.S. shops, boxed not in the traditional red but a tasteful environmental green.

You can get plant-based meats nowadays at Starbucks, Burger King, even White Castle. McDonald’s has been testing its Beyond Meat-based McPlant burger in select US locations. Dozens of fast-food outlets and plenty of local eateries, too, are discovering that there’s a serious market for animal-free “meat.”

Impossible Burger, the innovative plant-based burger that seems so much like the real thing that you can cook it rare and watch it “bleed” a genetically modified soybean protein called leghemoglobin — “heme” for short — that’s a laboratory-built, meat-free cousin to animal hemoglobin.

Beyond Meat, another modern faux-meat product, achieved a near-beef quality via a different route, using pea protein to create a beef-like texture and adding that delicious rare-beef pink thanks to the humble beet.

In fact, not-meat and not-fish products have been around for generations in the form of tofu, seitan and early soy-based ersatz meat brands. But the genre has taken one great leap from the near-meat products beloved by hippies and hard-core vegetarians since the 1960s.

Within the past few years, the modern plant-based meat industry atarted to boom. Improbably, the fast-food industry was among the first to adopt plant-based meats, perhaps seeing growth potential in vegetarians and vegans who otherwise would never consider darkening their doors. White Castle put a traditional veggie burger on the menu in 2014, and added Impossible four years later.

It didn’t take long for a few local eateries to put Impossible or Beyond burgers, or both, on the menu. The tasty meatless burgers became an alternative not only for vegans but for sometimes-carnivorous flexitarians, Meatless Monday observers and just about anyone else who likes the idea of a meat alternative. I’m glad to be able to drop in to Six Forks Burger Co., BurgerIM and Burger Girl to enjoy a delicious plant-based burger.

But from a market standpoint, these fine local eateries — let’s support them please — represent a blip on the spreadsheet compared with the plant-based boom in the fast-food industry over the past few years.

“Plant-based meat has gone mainstream,” Vox writers Matthew Hayek and Jan Dutkiewicz wrote just before the holidays. “The product category did $1.4 billion in sales and grew 27 percent in 2020.”

That’s just a drop in the skillet, Fortune magazine reported last fall: The global market for plant-based foods could see fivefold growth by 2030, the business magazine wrote, citing a Bloomberg Intelligence report: “Meat and dairy substitutes are marketed as healthier and more sustainable than the products from animals that they aim to replace.”

Beyond and Impossible both assert that their products are far better for the environment than traditional meat. Impossible, rocking the slogan “Eat Meat. Save the Planet,” claims that each of its burger uses 87% less water, uses 96% less land, and emits 89% less greenhouse gas than a beef burger. Beyond proclaims similar savings.

Is there anything not to like about this stuff? This depends on what you like. For the record, both burgers are highly processed, and some pure-food advocates fret about that. The Impossible Burger uses more organic ingredients than its competitor; Beyond is non-GMO, a label that Impossible, with its genetically modified heme as its patented ingredient, can’t match. They both claim about 300 calories per burger and 20 grams of protein, and both bring about 400 milligrams of sodium, a hefty portion.

I tried a slider-size sample of each at home. Both were delicious. Both tasted like beef. Both showed pink at the middle. Impossible tasted almost exactly like beef. Beyond showed just a hint of something like bologna lurking behind the good beeflike flavor. Put either one in a dressed burger, taco or pasta sauce, though, and I challenge anyone to tell them from ground cow.

Finally, I hit a few fast-food eateries to check out their tasty meatless meat.