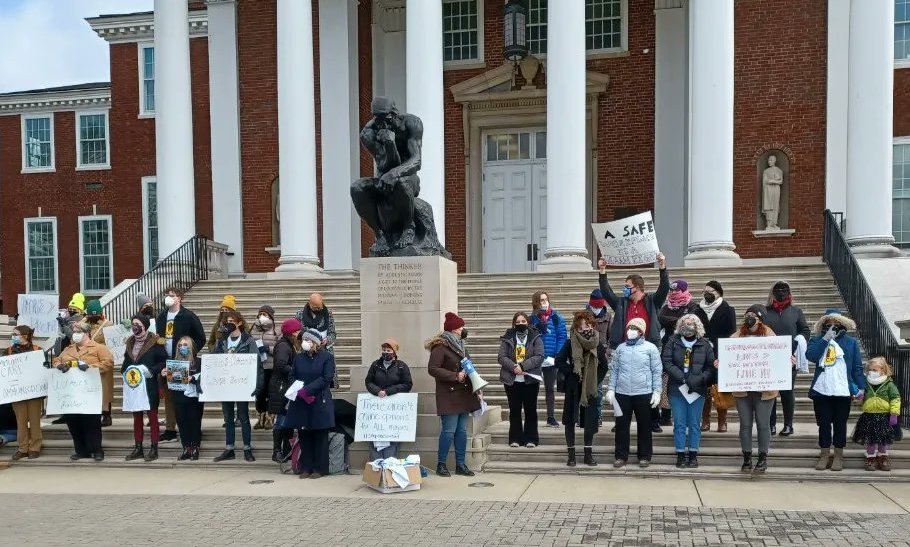 A group of about 30 people with United Campus Workers of Kentucky gathered outside of Grawemeyer Hall on Jan. 20.Photo via UCW Kentucky - Louisville/Twitter

As COVID cases and hospitalizations hit record highs locally this month, a group of students and faculty have been pressing UofL to increase safety protocols, first releasing a list of requests last week, and then staging a rally on campus Thursday.

The UofL Chapter of United Campus Workers of Kentucky’s Keep all Cardinals Safe! petition calls for instructors to be able to move their classes online, hazard pay for frontline staff, the availability of more high-quality masks, increased testing rules and more transparency. It currently has more than 1,700 signatures.

On Thursday afternoon, a group of about 30 people with United Campus Workers of Kentucky gathered outside of Grawemeyer Hall, with several people holding signs and giving speeches.

Third year political science student Ashanti Scott — who is the daughter of state Rep. Attica Scott — spoke at the event, saying that she thinks that UofL Interim President Lori Stewart Gonzalez needs to do more about pandemic safety on campus.

Ashanti Scott also read a statement from her mother, in which Attica Scott expressed support for UofL Chapter of United Campus Workers of Kentucky and their requests: “I’m a mom of a UofL student. My daughter deserves better than trying to pursue her education in fear. Her campus should be a place that prioritizes the health and safety of everyone.”

Members of the group eventually went inside Grawemeyer Hall, joining a UofL Board of Trustees meeting.

One member was allowed to speak at the meeting. After the group’s requests were voiced, Board of Trustees member Mary Nixon said that the “administration doesn’t take these concerns lightly.”

“I certainly respect and appreciate you all showing up today, and sharing your concerns,” she said. “Some of what you outlined is a bit inconsistent with what I’ve seen in terms of data and I want to ensure you that your concerns were noted and acknowledged.”

In a statement, a UofL spokesperson didn’t answer a question from LEO about whether the requests were being considered, but said that in-person learning has been “well-received:”

“The university has made and will continue to make COVID-related decisions in the best interest of its students, faculty and staff following the guidance of local and national health experts. Our efforts to provide in-person learning and student services in the fall semester were well-received, and despite the Omicron surge, we look forward to an equally successful spring semester.”

Tara Bassett of 502LIVEstreamers captured the event, which can be viewed here.