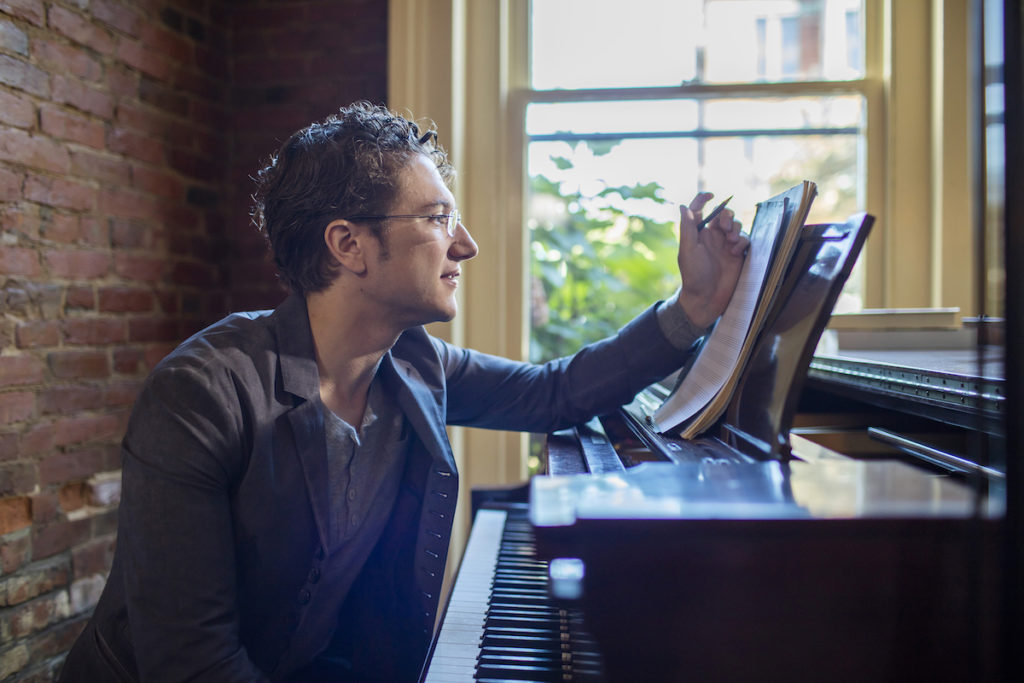 Pianist Yuja Wang appears with the Louisville Orchestra in concerts Friday and Saturday in Whitney Hall to premiere a new “Piano Concerto” composed by Teddy Abrams.

It’s the 14th composition Abrams has created for the orchestra in his eight years as music director, and the latest collaboration of Wang and Abrams comes from a friendship that dates to their college days at the Curtis Institute of Music, in Philadelphia – both setting sail on careers that now find them among the brightest young stars in classical music.

“We were at Curtis together, and about the same age, and she was already starting to play major performances,” recalls Abrams. “It’s not unusual for people to already have a significant career while still a student there. But in her case, I think everybody knew that this was quite unusual in the speed her career was taking off.”

Abrams and Wang — oh, why not call them Teddy and Yuja, as everyone does — became friends and colleagues when Teddy signed up to accompany Yuja for her lessons. While Yuja played her solo part, Teddy would play the orchestra’s part on another piano — a “reduction” of the orchestra’s score consolidated as a piano accompaniment. In other words two pianos: Yuja soaring off in artistic flight, Teddy trying to keep up.

“She was already performing at such a high level that no other pianist at the school would dare accompany her,” says Teddy. “Either I was just foolish, or brave, but I signed up to play for her. She would call me 30 minutes before her lesson, and say, ‘Oh, by the way, I’m going to do the Rachmaninoff Second Piano Concerto, or I’m doing Beethoven, or Prokofiev’s Third, and can you come play the orchestra part?’ And I’d say, ‘Sure, sure.’

“I’d be thinking, what’s the worst thing that could happen? And so I’d come and ‘sight read’ my way through those things.”

Of course, Teddy, himself, was an accomplished player — at a certain level. More important, he was a budding young conducting and composing candidate, with a natural understanding of music, and musical showmanship.  “It was,” says Teddy, “the beginning of a really special relationship that we have retained to this day.”

Behind the scenes Teddy and Yuja continued their practice work sessions, when possible. One time, working toward an appearance with the San Francisco Symphony and maestro Michael Tilson Thomas, Yuja practiced a week on a particularly difficult concerto with Teddy as her guide, working in their familiar format: Teddy playing the orchestra part on one piano, with Yuja crystallizing the solo on her piano.

“It’s a really private thing,” Yuja explained at the time. “You learn the music. You understand something. It’s like reading poetry by yourself. And then you have to read it when there’s another person in the room, and you have to make the other person like it, and share what you have in mind.”

So it’s only natural Teddy’s first piano concerto might have some origin story with his friend Yuja. And it does — only not as first envisioned.

“The original concept was that I would write a companion piece for her to play when she performs Gershwin’s ‘Rhapsody in Blue.’ Something that has the same kind of jazzy American populist vibe that orchestras could program alongside of ‘Rhapsody,’” Teddy said. “Because that piece is such an unusual length. Just 16 and a half minutes long. Generally, if you’re an orchestra and bringing Yuja in, you would also have her do something else.”

“It’s always been a little bit of a puzzler as to what to program with ‘Rhapsody in Blue,’” explains Teddy. “There are shorter concertos that could be played, but they’re in very different styles [from the Gershwin classic]. So I thought this would be a great opportunity to write a companion piece.”

“But then this new piece that I was writing for her kind of blossomed into a much, much larger work,” says Teddy, who clocks his concerto at 35 minutes. A stand alone.

Teddy says the concerto does reference Gershwin’s “Jazz Age,” but ventures beyond Manhattan for a look at the many visages of musical Americana. That’s been a broad theme of Teddy’s tenure here, championing the Louisville Orchestra’s legacy of presenting American music. And he doesn’t stick strictly to the classical symphony format. Expect to hear a beat laid down occasionally with electric bass and riffled with cymbals and snare. Or a brassy Latin America sound. Or American Gospel.

And expect Yuja to do it all on the keyboard, setting the themes in multiple cadenzas.

“The piano, in particular, is a kind of wanderer that makes it through hundreds of years of musical history, and is so translatable to other styles,” says Teddy. “I see this concerto as an opportunity for the piano to guide us through what I think is one of the strengths of American culture, its plurality, its interconnectedness.”

Teddy recently visited Yuja in New York to work on the concerto. Except with just Yuja’s piano. No accompaniment from Teddy this time. “It’s too hard for me!” says Teddy.

But perfect for a talent as dynamic and exuberant as Yuja.

“I think she’s one of the greatest pianists alive, and of all time, if I can safely say that,” says Teddy.

And interesting the concerto is “too hard” for the composer to play.

“I mean I can kind of pick my way through it, you know, slowly,” says Teddy. “But working with Yuja on the piece in New York was something special. To hear her play it, at tempo for the first time, was like a revelation. There is such a difference between looking at it on the page, and even imagining it my head, and then hearing it brought to life by a human being. Just one of the most gratifying experiences any creative musician can have.”

Delivered by his friend Yuja Wang.

“I always intended for her to be the one to take the piece and make it her own,” says Teddy. “And ideally come to Louisville to premiere it.”

Louisville Orchestra will perform the piece with Yuja Wang at Whitney Hall on Jan. 7 at 11 a.m. and on Jan. 8 at 8 p.m. Vaccination proof or negative test required. Tickets are  $23-87. For more information, louisvilleorchestra.org.