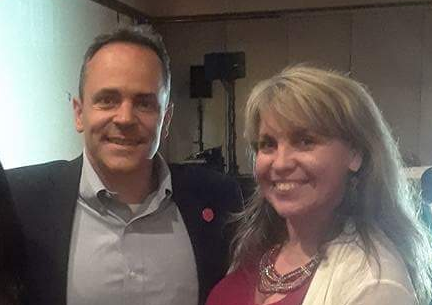 Alyssa Dara McDowell — best known for rushing the stage at an election night event in 2019 to falsely tell the crowd that Matt Bevin was re-elected as governor of Kentucky before being escorted away — has filed to run for U.S. Congress.

She has submitted a statement of candidacy form to run for the seat of District 4, currently held by Rep. Thomas Massie.

McDowell, who lives in Covington, has run for office before, unsuccessfully campaigning as an independent for Kentucky House of Representatives District 65 in 2018, and again as an independent for the U.S. Senate in 2020, although she dropped out before the general election. This time, she’s running as a Republican.

McDowell’s viral moment happened on Nov. 5, 2019. During the GOP election night at the Galt House in Louisville, she ran on the stage by herself, holding a phone to her ear and said: “Hey, we just got word that Matt Bevin has won.” And then she started yelling “woooooooo” and jumping up and down, before security kicked her out. Of course, Matt Bevin ended up losing the election to current Gov. Andy Beshear.

“I was a little more riled up about this election than I usually am,” McDowell, who said she went on stage to pray, told the Cincinnati Enquirer later that month.

Meanwhile, Massie has been busy on Twitter spreading COVID misinformation.

Should be an interesting primary.