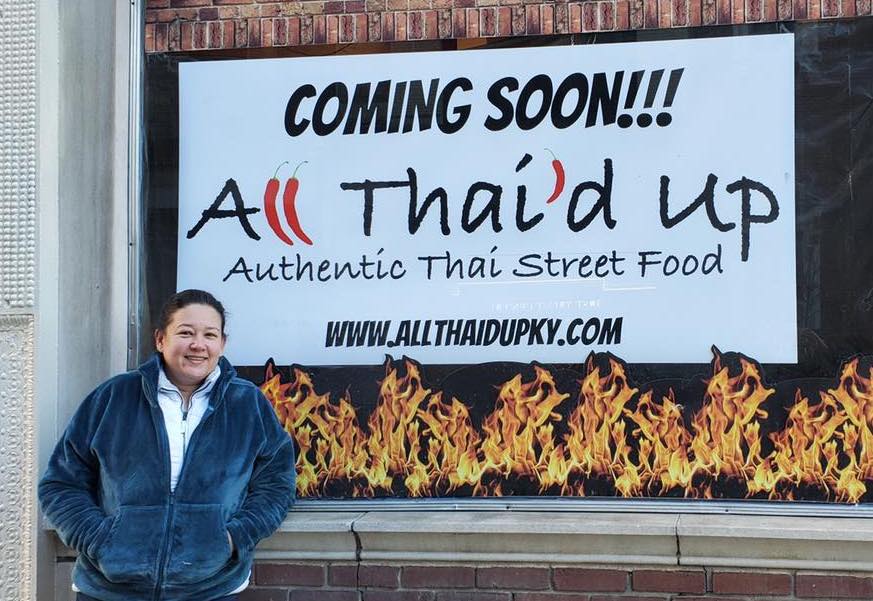 Kathy Aphaivongs has wanted to open a physical restaurant since she moved to the U.S. from Thailand in 2017.Photo via All Thai'd Up/Facebook

All Thai’d Up, a food truck that serves authentic Thai dishes, recently announced that it will open its first physical location downtown in mid-February.

A post shared by All Thai’d Up Food Truck (@allthaidupky)

Kathy Aphaivongs, who owns and manages All Thai’d Up, told LEO that the new restaurant will be set up as a fast-casual establishment with a big carryout component. It will also have a grocery feature where people can purchase Thai snacks. Eventually, the restaurant will offer take-home meal kits.

The new location came to be because Aphaivongs realized that she was ready and had a need “not to haul around things all the time and just stay put” rather than drive around the city.

When she moved to the U.S. from Thailand in 2017, she had originally wanted to own a brick-and-mortar restaurant, as she did in her home country, but she found that it was too expensive to do so in the States.

Once the All Thai’d Up food truck took off, though –– especially in the last two years –– purchasing a restaurant became viable. Downtown restaurants are ideal for lunch, she told LEO, and she didn’t want to run a business with late hours, so purchasing a spot downtown just made sense.

This week, Aphaivongs and her staff are “all hands on deck” as they work on getting the space ready.

The menu at the downtown location will be bigger than what the food truck offers, but the food will still be “straightforward Thai, no BS, no Americanism –– just, this is how I grew up eating it; this is what you’re gonna get.”

To that end, there won’t be a heat scale for dishes –– if a dish is meant to be cooked spicy, it’ll be spicy, without modulation.

“Like it or leave it, y’know? Because that’s how it is in Thailand,” Aphaivongs said.

Still, there will be options for people who don’t like spicy food as well as those who do –– as Aphaivongs pointed out, the idea that all Thai food is spicy is a common misconception. The restaurant’s menu offerings will include a rotating selection of curries, papaya salad, veggie stir fry, grilled steak, and grilled chicken, plus classic Thai dishes like pad see ew and pad thai.

The food truck isn’t operating this week, but it will still continue to operate after the downtown location opens.

“The food truck’s kind of like my baby, my bread and butter here,” Aphaivongs said. “If all else fails and I can’t keep up with the lease, and COVID happens again, I still have my food truck. That business boomed during the pandemic. We thought we were gonna be hit like the restaurants, and it ended up being the opposite.”

Even though this is a new venture for the business, loyal fans need not worry.

“Expect the same quality of food and tastes, flavors, that you would have gotten on the food truck,” she said. Those, for certain, are “not changing.”