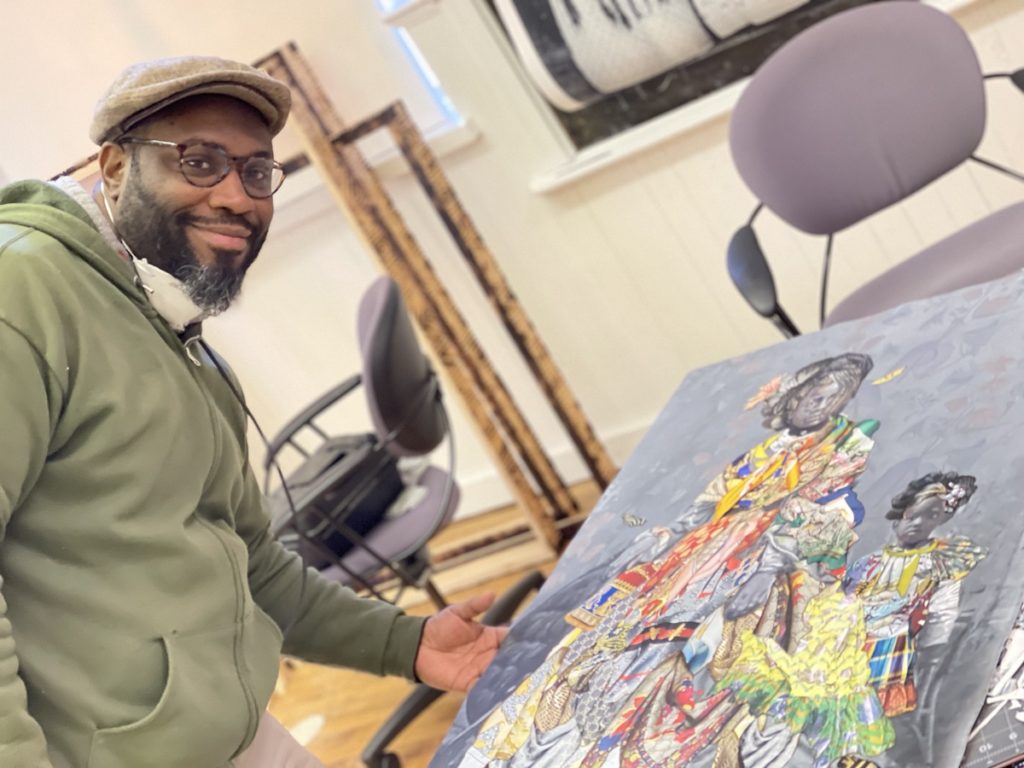 How on earth did an artist like Stan Squirewell end up in a place like Louisville? Simple: Louisville is great, rents and home ownership are within reach and love can make many things possible.

Squirewell got his start in Washington D.C., but it wasn’t smooth, and like many young men with not enough to do, he thought about getting in trouble and following the wrong crowd. He was lucky to find roadblocks at every wrong turn, all directing him back to the right path, back to his paintbrush.

Being a successful artist feels like a distant dream to many Black artists. Even Squirewell had no idea where he wanted his work to go until he took a rude comment by a teacher as a challenge. He met that challenge and has exceeded it and many others, showing several times at Miami’s Art Basel, winning the Bombay Sapphire Artisan series prize in 2013, then sending work this year to Art Basel where the pieces were sold before they were hung on the walls.

LEO stopped by Squirewell’s studio and did our first in-person studio visit. We talked to Squirewell about his work, his first recognition of being a minority and being able to create well and eat well.

LEO: How did you get started?

Stan Squirewell: It’s so many stories I’m trying to pick, because they’re all strung together.

I started drawing with my cousin, drawing boxcars from a book my grandmother had gotten us for Christmas, and I hated my drawing, couldn’t stand the way it turned out. It didn’t look like a boxcar. I crumpled it up and threw it in the trash can. My cousin’s car looked great. He’s a year older than me. He went to the trash and ironed the paper,  looked at it, and said, ‘Man, you shouldn’t give up on yourself so quickly.’  He said, ‘If you fix this one line. Fix this one line right here, it would look just like a car. So he did it and I’m just looking at the car like, ‘Oh my god, this is not as bad as I thought.’

So that was the thing. Like, ‘OK, man, never give up on yourself. Keep going.’ Like, ‘If you make a little deviation, just try to pick yourself back up and get back on and keep moving.’

Tell us a moment that changed your perspective.

Years later, about maybe eight years old or possibly 10, my great aunt… I’d go over to her house all the time, and I never saw the artwork on her walls. I went downstairs because she and her husband, my uncle John, lived in the basement and the boys lived upstairs. I went downstairs and I saw my uncle with this easel and his oil painting. It was this amazing landscape. And because I never saw anyone paint for real-for-real, in real time — it blew my mind.

He was painting. He was sort of the following Bob Ross. But his painting was a little bit different because he went a different direction with it because he would take magazine cuttings of animals and embed them into the scene. I was just so blown away. Every single weekend, I would bring my drawings over to him. ‘Uncle John, this is what I did,’ and he would just encourage me and say, ‘Man, you can do it.’

[While in middle school and drawing in the margins of his papers, a teacher asked him whether he was taking art classes. He was not, but she encouraged him and helped him discover his high school where he could hone his artistic talents. Squirewell attended the Duke Ellington School of the Arts in D.C. where he spent three productive years mastering his skills as a painter.]

Did you go to college for art?

I went to this college, and it was my first time being around people who did not identify with the same problems and culture that I had. I come from this 99.99% city with nothing but Black folks in there. And, all of a sudden, now, I’m in this environment where I’m truly the minority. It weighed on me very heavily. So I ended up, even though I had the skill sets and all that, I flunked out.

My early childhood, early teen and teenage years were insulated with Blackness, you know? So I didn’t even know what to say. I thought they were alien. That was the first time feeling racism.

I remember distinctly being in this one class. It was a nude model drawing class. I was taking a very long time doing this particular drawing of this model. And the teacher came around, and he asked me, ‘Why are you taking so long with this drawing?’

I just looked at him and said, ‘Because, I really am enjoying this. I like doing this.’ But then he says to me, ‘It’s not like any of your work is ever going to  be in a museum.’ And the moment he said that was the moment I was like, ‘Oh, that’s where my work is going. That’s why I’m doing this.’

[Squirewell’s first major show was at the Banneker-Douglass Museum, where he dropped off a piece of work he’d done in high school and it was accepted by the curator on the spot. He was taken underwing by many great D.C. artists like Michael Platt and Lou Stovall, who helped him and pushed him toward getting his work into major exhibitions like Art Basel in Miami.]

When did you realize you could make art and eat?

As I was down there [at Art Basel for the first time], I remember just thinking that the art world runs… this is the generator that runs everything. That year they sold somewhere upwards of $2 billion worth of art. I’m walking around and, in these little spaces, I’m seeing Picassos and [inaudible] and Beardens and Basquiats and everything, just on these temporary walls. And people in suits all over the place — Prada bags. I was thinking to myself, ‘Yo, I’m in the right business here, baby.’ Nobody could tell me from now on that the starving artist thing is the way to go.