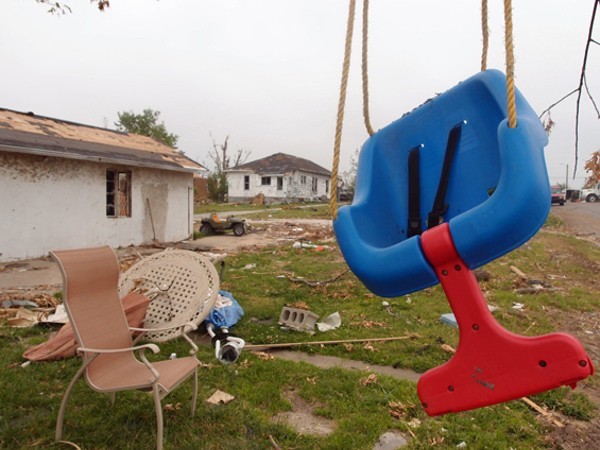 Three weeks after Joplin, Missouri was hit by a tornado in 2011.Photo by Albert Samaha, Riverfront Times.

Kentucky’s recovery process from the storm that Gov. Andy Beshear called the worst tornado event in the state’s history is going to take years, according to Kentucky’s Emergency Management Director Michael Dossett.

Years, or a decade?

In 2011, a tornado cut a six mile path at three quarters of a mile wide through Joplin, Missouri in what was one of the worst tornadoes in the country’s history. Today, the area is about 90% recovered, said Joplin-Jasper County Emergency Management Director Keith Stammer.

“When people say, ‘Well, gosh, I figure after 10 years you’d be 110%,’ they just don’t really understand the extent of the devastation,” said Stammer.

And, the impacted area in Missouri looks different than it did before.

Kentucky is currently at the beginning stages of a long process.

Search and rescue crews are still on the ground. There are 18,500 customers without power. Just yesterday, crews started to haul debris away.

In Joplin, the tornado touched down on a Sunday. Stammer’s crews recovered their last live person on Tuesday and stopped looking for survivors on Friday. That’s when search and rescue turned into search and recovery: Finding those who have died and cleaning up.

But, even the cleanup is split into separate phases, said Stammer. The initial major effort,  including clearing roads, restoring utilities and bringing back street signs and stoplights took three months. The rest of the cleanup, getting rid of debris, lasted around six to nine months.

Long-term recovery takes years and it involves figuring out what should become of the impacted area. Because it’s probably not going to look the same as it did before.

Imagine your neighborhood has been wiped out. A gigantic earth mover takes away everything that was there before: Not only buildings, but trees and other vegetation.

“Why would you go back?” asks Stammer. “Everything you ever valued is gone.”

That’s what happened in Joplin: A major hospital was destroyed, said Stammer. It moved to another part of town. Other health care infrastructure followed it, as well as the people working at the hospital. And the services that they used.

A community that’s been destroyed has to figure out what it should be next.

In Joplin, the government held meetings, Stammer said, and asked the people what they wanted. Today, there are new homes and businesses. After a tornado hit rural Greensburg, Kansas, the area decided to fill the land with renewable-energy powered buildings.

In Joplin, there are still empty commercial spaces where buildings used to be. That’s why Stammer says the area is 90% recovered. He does believe that, eventually, they will have new purposes.

Today, Stammer looks around his city and is proud of what has become of it: the city replanted thousands of trees, the medical community has rebuilt schools and churches and businesses have come back.

“With all due respect to those who lost life or were injured or lost property, it’s been a positive experience 10 years later on,” he said.