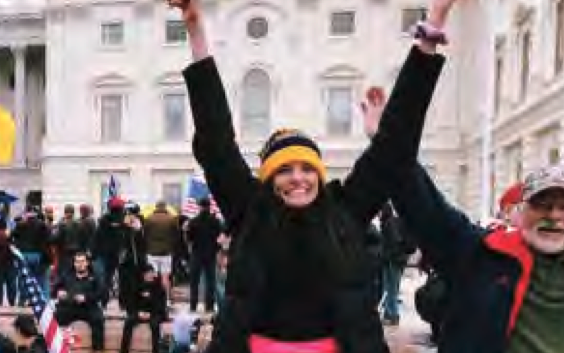 Gracyn Dawn Courtright outside the U.S. Capitol on Jan. 6, as seen on her Instagram.Photo via court records

After former UK student Gracyn Dawn Courtright entered the U.S. Capitol on Jan. 6 with other “stop the steal” rioters, she posted on Instagram, “Can’t wait to tell my grandkids I was here !”

On Friday as she was sentenced, Courtright said she was no longer proud of being one of the hundreds of people who stormed the Capitol at the beginning of this year, interrupting Congress’ attempts to certify the presidential election results in favor of Joe Biden.

“Now, I understand that I am a horrible person,” she said, according to Courthouse News Service.

Courtright was sentenced to one month in jail for one count of entering and remaining in a restricted building or grounds, less than the six-month sentence that the prosecution recommended. She must pay $500 and complete one year of supervised release and 60 hours of community service.

Courtright had previously been charged with five counts but pled down. 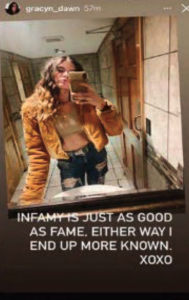 Courtright, now 24, was enrolled in the University of Kentucky when she entered the Capitol. The Courier Journal has confirmed that she is no longer a student.

While in the Capitol, she was seen on security camera holding a “Members Only” sign that she had taken from its place in the building. A police officer grabbed the sign from Courtright before she could leave the Capitol.

Courtright, a West Virginia resident, posted on Instagram about her involvement in the failed insurrection. She is pictured outside the Capitol with her hands raised in celebration.

Later, in screenshots provided to the FBI, she posted a selfie to the social media platform, writing, “Infamy is just as good as fame. Either way I end up more known. XOXO.”

A witness also provided screenshots of direct messages between them and Courtright on Instagram.

“it’s history idc,” Courtright replied, “I thought it was cool.”

When the witness accuses Courtright of committing treason, Courtright said, “idk what treason is.”

FBI agents visited Courtright’s father at his home on Jan. 14, where Courtright was staying.

Courtright’s father said he did not feel comfortable allowing her to give a statement unless she was notified she would be in trouble for her actions.