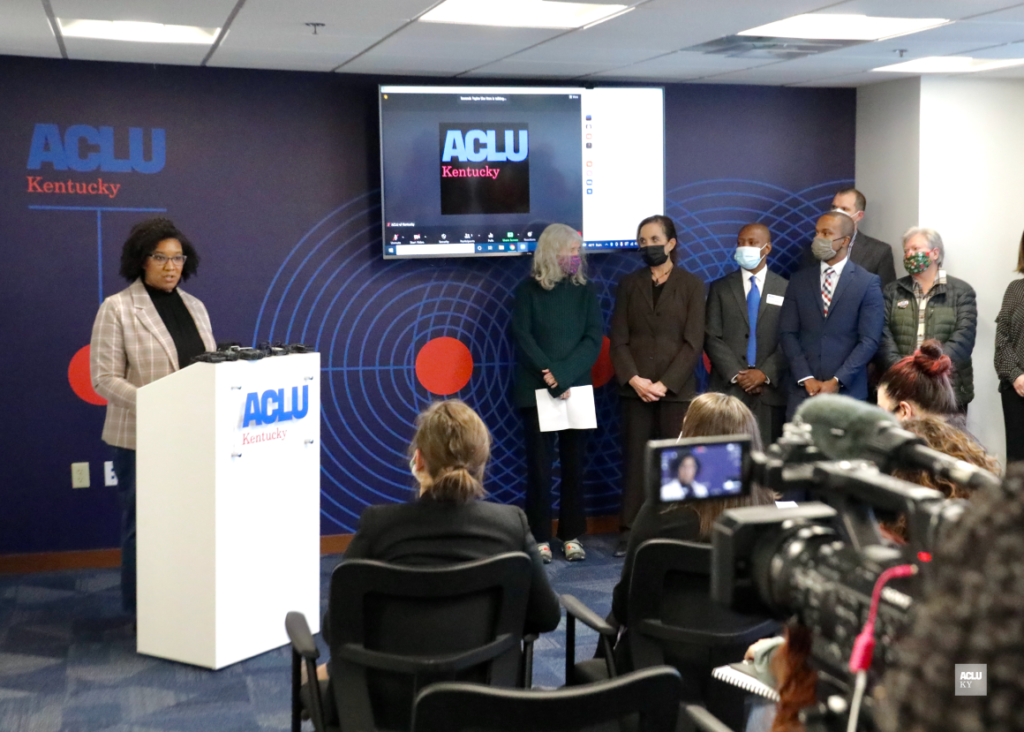 Amber Duke with the ACLU of Kentucky says that "we need to get people out" of Metro Corrections.Photo courtesy of ACLU-KY

Staffing shortages have so far gotten most of the blame for recent problems at the Metro Department of Corrections.

But, after three deaths last week, the ACLU of Kentucky and other groups are saying the solution lies in reducing the number of people incarcerated.

“We need to get people out and we need to get them connected to the programs that are going to help them,” said Amber Duke, the deputy director of ACLU-KY at a Monday press conference.

The ACLU is calling on Jefferson County’s prosecutors to stop requesting warrants with cash bonds for “anything other than alleged offenses that present a legitimate threat to community safety.”

But, the Jefferson County Attorney’s Office says it is already standard procedure for its office not to request cash bonds for non-violent offenders, according to First Assistant Ingrid Geiser. Instead, she said that the office asks the court to send the defendant a Notice to Appear with a new court date.

As of Monday around 4 p.m., the Jefferson County Commonwealth’s Attorney Office had not yet received a formal notification from the ACLU about the organization’s calls for action, according to First Assistant Erwin Roberts.

“After review of the letter, we will review the concerns raised in the letter,” said Roberts in an email. “Our concern is with public safety for both people inside and outside Louisville Metro Department of Corrections.”

At the press conference, Carla Wallace, an activist with Louisville Showing Up For Racial Justice, said, “Everyone in the system who is not changing what they are doing right now is implicated in these deaths.”

Of the three people who died in Louisville Metro Corrections last week, one death has been attributed to suicide. Back in September, five inmates were hospitalized for suspected overdoses.

So far, the city has responded to the crisis by creating incentive programs for new recruits and corrections officers who stay on the force or refer job candidates. Duke said that these actions are “not enough.”

“Every business sector is experiencing a hiring crisis right now. We cannot expect that if the city is even able to hire people quickly that they can get them trained properly in order to care for folks,” she said. “People are dying.”