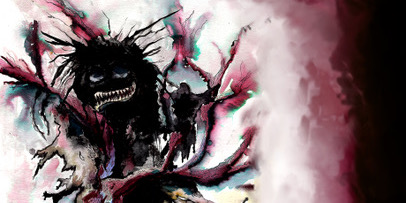 "The Eyes Beneath My Father's House" deserves to be considered by the editors of the horror genre's best-of annuals.

An author’s short stories may accumulate as a series of lessons gradually mastered. Or a compulsion that won’t resolve into a single plot but still demands that the writing continue. One thing story collections rarely are, though: an obvious investment for publishers who know that it’s almost always easier to market a novel. Here are two story collections that have clearly gotten between covers by being labors of love.

In an age where print-on-demand and online-promotion tools help DIY determination, these Louisville authors don’t need publishing houses standing behind them and writing checks for advances. They are worth serious consideration with your reading money and time, and they know it. They also know that if you don’t see these titles on local store shelves, you can ask that the titles be stocked, or you might place an online order.

“(Mostly) True Tales from Birchmont Village” by Peter J. Stavros (62 pgs., $10) has an origin story that’s somewhat traditional: a magazine published several stories that the author had set with a common setting and characters. He followed through by tightening the links and expanding on this world he’d created. But there’s more commonality to the seven stories of “Birchmont Village” than is typical for a sequence of linked stories. This is a sequence of exercises in stylistic voice.

Homespun humor accretes among the reactions of the many small-community characters — just enough in number and diversity that you’ll remember most by name or by their foibles. What do they react to? It might not be much — after all, the most prominent vehicles in this book are a homeowners-association golf cart (driven by a self-important old fart, of course) and the seldom-used-for-fires firetruck.

But the collection as a whole has aspects of a literary puzzle-knot — even as it maintains its layers of charm. Admiration or empathy for individuals, or entire arcs of frenemy relationships, come out through curt glimpses. One or two sentences each, glimpsed over the course of several stories — Lake Wobegon-style vignettes aren’t handed out on a platter here. And the occasional visit from the truly peculiar (“The Time the Johnsons’ House Caught Fire”) gets a cracked-mirror reflection that honestly earns a gently uplifting joy in a timely concluding story.

“The Eyes Beneath My Father’s House” (WSF Productions; 464 pgs., $19.99) is a model of contemporary story production. Tyler Bell is the writer, and the voice, behind the podcast “The Westside Fairytales,” and this collection comes from the story-scripts of its fourth season. The author-podcaster’s background includes war zone deployments with the Marines and writing experience that began with journalism but has moved toward storytelling that’s more personal—and more dark.

“Demons, desperate souls, and eldritch horrors” is how Bell introduces his fiction on one page of his website. The 10 tales in his self-published volume reveal that to be a narrow range of subjects compared to all that’s within Bell’s capabilities. “The Umbrella Man” leads off with bickering adolescent boys whose loyalty tests in the face of the unknown take a Stephen King setup and give it Joe Lansdale punch: a familiar formula. But “Mud of My Heart” is an elegiac tale that avoids wallowing in the romantic (and Romanticist) possibilities — by plot choices but particularly by careful tempering in description (a stylistic skill retained from Bell’s journalism?). “Within as Without,” a scenario of apocalyptic savagery, is similarly economical without being either thin or overly dependent on its grisly aspects. “Ojos Oscura” is overall the most memorable story here and deserves to be considered by the editors of the horror genre’s best-of annuals.