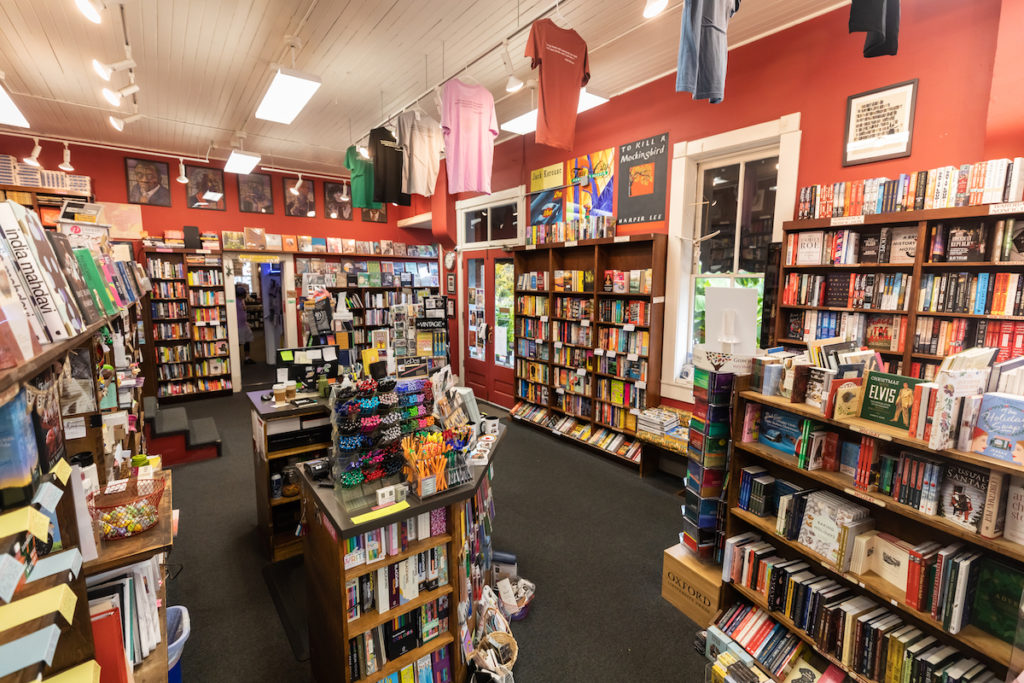 Carmichael’s Bookstore is buying more books at a time now in order to make up for supply chain issues. Photos by Kathryn Harrington

The Ever Given, a 1,300-foot-long container ship, made headlines in March when it became stuck in the Suez Canal, halting passage for weeks for other ships and essentially stopping an estimated $9.6 billion worth of trade. (It was an event significant enough that it now has its own Wikipedia entry.)

Such international stories seem far removed from most of us. But it’s worth taking a look at specifically how the ongoing supply chain crisis brought about by the seemingly never-ending Covid-19 pandemic affects small, local businesses — places like the record store on the corner or the boutique pet store down the street. Businesses like Pregame Coffee downtown.

“When that ship was stuck in the Suez Canal, all my matcha tea was on that ship,” Pregame owner Rob Arnold told LEO Weekly. “I couldn’t get mocha tea for a month. It’s hitting us hard.”

For Lorena Casas-Ostos, owner of MexA Tacos, which has locations downtown and in St. Matthews, supply chain issues have become an ongoing headache. She’s had difficulty ordering simple items such as plates and soft drink cups from her online vendor Webstaurant Store. For example, the regular cups she had been using became unavailable, and the lids she already had wouldn’t fit the replacement cups — so, she also had to purchase new lids.

“Before, it was so easy for me,” she said. “I would say, ‘I need this and that,’ I’d go to the vendor’s web page and go click, click, click. Now I have to spend more time. What was a simple task before is not any longer. It’s always something.”

And it’s more than just ships idling in far-away canals or stuck shoreside loaded with products that aren’t going anywhere anytime soon. Labor shortages are wreaking havoc as well, making the situation worse. Some industries find themselves lacking production resources of all types. The New York Times recently published a story about how a shortage of truck drivers negatively affects the supply chain in the U.S.

“Truck drivers have been in short supply for years, but a wave of retirements combined with those simply quitting for less stressful jobs is exacerbating the supply chain crisis in the United States,” The Times reported, “leading to empty store shelves, panicked holiday shoppers and congestion at ports. Warehouses around the country are overflowing with products, and delivery times have stretched to months from days or weeks for many goods.”

And one might be surprised by just how many different industries can be affected by supply shortages. Kelly Estep, co-owner of Carmichael’s Bookstore, said the issues she has faced are multi-layered. For starters, many large U.S. printing houses have closed in recently years, so most major publishers are printing books in China.

So, not only is it tougher to get books printed domestically, it’s more difficult than ever to get them to the U.S. and onto bookstore shelves once they are printed. In addition, she said, a general paper shortage is also affecting her business, as well as bookstores everywhere. She said it’s even getting tougher to procure cardboard boxes for shipping products like books.

“Pretty much every piece of our supply chain has been affected this year,” Estep said.

And that doesn’t even speak to local staffing shortages facing many small businesses.

Arnold hasn’t tried hard to hire new staff for his coffee shop so far this autumn, but even if he did, it would be a challenge. He said from February to June he aggressively sought to hire new staff, and during that stretch, 22 different prospective employees failed to even show up for a first interview. No phone call, no apology, just ghosting.

“I placed an ad, and they would reply to it, we would correspond by email, an appointment would be set, and they would never come,” he said. His theory is that they were using the appointments to show they were actively seeking work to satisfy unemployment benefits requirements, and that they never intended to accept a job.

Casas-Ostos has faced similar challenges. While she has enough staff for the moment to operate, she wishes she could hire at least one more person. But that person hasn’t materialized.

“I really need to hire some more people and I haven’t been able to,” she said. “I’m not getting people interested, and if they are interested, they want to work from 9 a.m. to 3 p.m., and that’s it.”

Joe Phillips is the owner of Pints & Union, a European-style pub in New Albany, and he has built a consistent permanent staff by offering benefits, flexibility and competitive salaries — “No one in my kitchen is making less than $15 an hour now,” he said. But he has faced hiring issues in the past, even before Covid-19.

Phillips believes a big part of the problem now is that the interruption the pandemic forced upon everyone’s lives is that it gave burned-out hospitality and retail workers a chance to stop and reconsider their paths. Many of them, Phillips believes, took the time to get online certifications in other fields or to start their own businesses from home.

Jennifer Rubenstein, director of the Louisville Independent Business Alliance, said she hears from member businesses about staffing issues on a regular basis, including from Arnold.

“Getting somebody to show up to an interview is a victory in itself,” she said. “Even before the pandemic, that seemed to be a No. 1 thing folks were looking for, those soft skills. A lot of places will train you; they just need somebody who’s serious about coming to work and who’s reliable. And it’s not just restaurant and retail workers, it’s skilled positions as well.”

She said she has been in touch with Jefferson Community and Technical College about pairing students with potential employers locally. She also has started a youth advisory board for LIBA, and there are discussions about launching a job fair to help small businesses find new workers.

But this type of staffing shortage isn’t confined to local consumer-facing businesses. Often, supplies will arrive to the U.S. and there isn’t enough workforce to move the products forward, starting with getting it unloaded and then properly inspected for domestic distribution. And then even when it finally gets to a truck to start toward its destination, the aforementioned truck driver shortage can hold things up.

Roger Baylor is the beer program director for Pints & Union, and he said at one point a shipment of Pilsner Urquell beer, a staple at Pints & Union, arrived on the East Coast. Some of it was moved forward, but much of it sat there for a long period of time. Beer, of course, has a limited shelf life, Baylor said, and thanks to a control system failure, much of that shipment had to be discarded due to spoilage.

The three largest ports for product containers, measured in what are known as TEUs (20-foot equivalent unit) in America are located in Los Angeles, Long Beach and New York, per Baylor. When those get jammed up, businesses of all types suffer.

“It stands to reason, it’s not just China,” Baylor said. “For the most part, we’ve been about three weeks to a month behind” in getting products delivered.

How do businesses combat that? For Carmichael’s, it’s about buying more books at one time. Estep said this year Carmichael’s produced its holiday catalog early to get ahead not only of the printing and paper challenges, but book supplies. They chose the books that would be featured for the holiday season and ordered large quantities instead of on an as-needed basis due to cash flow and storage considerations.

“Normally, in our industry we’ve gotten used to what we call ‘just-in-time’ inventory,” Estep said. “If you go into the Bardstown Road store, we have stacks of things. We have books in the business office, stacked on the shelves.”

For his part, Arnold is employing a similar strategy as much as he can. He buys many of his supplies at Barista Pro Shop, which has a warehouse in Louisville. Facing down a shortage of cups, he pulled up to the warehouse one day and saw workers actively unloading a truck — filled with cups.

“I said, ‘Hold everything – I’m going to buy about a thousand dollars worth of cups right now,’” he said. “I placed the order in the parking lot.”

And the same might go for Christmas shoppers this year. If your local businesses are getting ahead of the game, that’s probably a sign we all should follow suit. As Christmas grows nearer, starting with the annual Black Friday shopping frenzy, shipping for online orders could get very tricky.

Shop locally, shop early and you might have a leg up, according to Pinch Spice Market’s Thomas McGee. He said many of his customers started purchasing Thanksgiving spices earlier than in previous years. As he still has some spices stuck in far away lands, with no idea when they might arrive in his inventory, he advises buying holiday supplies sooner rather than later.

“Be strategic in your ordering,” he said. “We are way out ahead in our messaging to our customers. We’re getting the same message from the Postal Service, FedEx and UPS, that they are already expecting delays and will continue to do so.”

Of course, buying local will mean shipping won’t matter as much, at least on the business-to-consumer end. One thing’s for sure: Given these ongoing challenges, with no relief in sight, local businesses need the support.

CORRECTION: This story was updated to reflect the correct type of tea that Pregame Coffee could not access while The Ever Given was stuck in the Suez Canal.