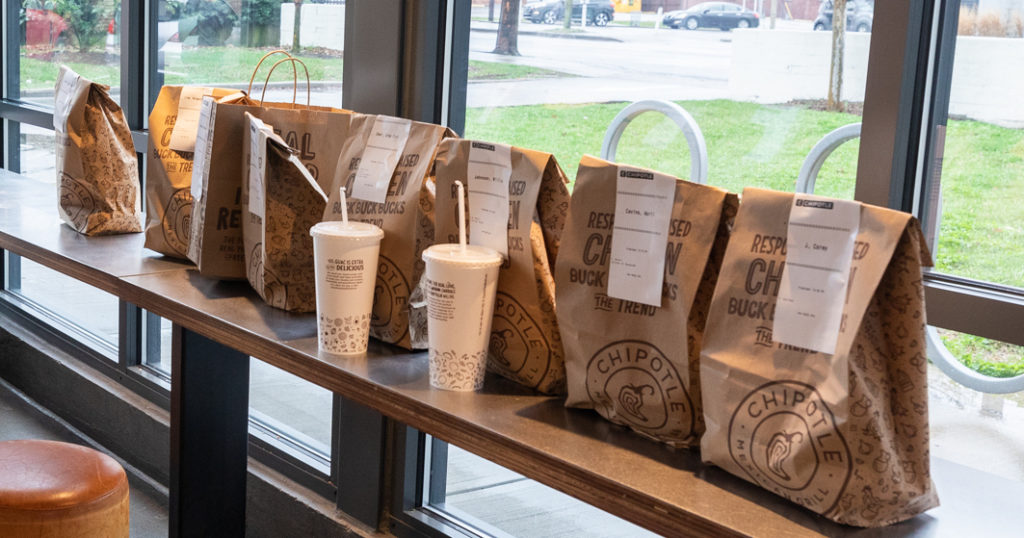 Chipotle bags ready for takeout at the chain's Bardstown Road location at the beginning of the pandemic.Photo by Kathryn Harrington

Taped signs on restaurant windows and drive-throughs, declaring them closed due to staff shortages and walkouts, have become something of a symbol of the muted labor revolution currently happening in the United States.

On Monday night, it appeared as if the employees of the Bardstown Road Chipotle had joined the ranks of departing food workers when WHAS anchor Doug Proffitt posted a picture of one such announcement on his professional Facebook page: “CLOSED,” the note read, “Half of our staff walked out including the manager and we are no longer able to remain open.”

A series of staff resignations led to the store closing early on Monday, according to the restaurant’s general manager, Raven Whallen, when reached by LEO. Although, on Tuesday morning, it was open again. Whallen said one employee who had put in her two weeks notice quit early, a manager quit and another employee left permanently because she was too scared to return after her car’s catalytic converter was stolen and her tires were slit. Whallen, who has worked at the Chipotle since February, said it has been difficult keeping the restaurant staffed.

“A lot of people don’t want to work nights, and if they do they, they’re underage. So, it’s kind of hard because they all have to be off at a certain time. We have to follow the labor laws,” she said.

A Louisville woman purporting to be a former Chipotle manager, Sidney Plogsted, shared Profitt’s post and said that the chain’s employees have had a difficult time working through the pandemic.

“…the thing that pushed us to our breaking points were the customers treating us poorly for doing the best we can. my team and i were cussed at, threatened, had food thrown at us, and called degrading and dehumanizing things over something as simple as a messed up order,” she wrote.

Plogsted also accused corporate Chipotle of making things worse for employees by asking them to work 50-70 hours per week.

In response to an email for comment, Chipotle Chief Corporate Affairs Officer Laurie Schalow said, “Chipotle’s engaged and hard-working employees are what makes us great, and we encourage our employees to contact us immediately, including through an anonymous 800 number, with any concerns so we can investigate and respond quickly to make things right.”

Plogsted, who wrote that she now has a new job as a medical assistant, ended her post with a plea to be nice to service workers.

“they are people, with families, emotions, and lives outside of where they work, not robots,” she said.

More people are quitting their jobs now in the United States than ever, and the phenomenon has been dubbed the Great Resignation. Several reasons have been given for the trend: Burnout among workers, child care difficulties, a lingering fear of COVID, a reevaluation of priorities and comfier financial cushions, partly thanks to government money distributed during the pandemic.

Kentucky had the highest quit rate out of any state in August, according to a recent report from the U.S. Bureau of Labor Statistics, although more people in the state were hired than quit that month.