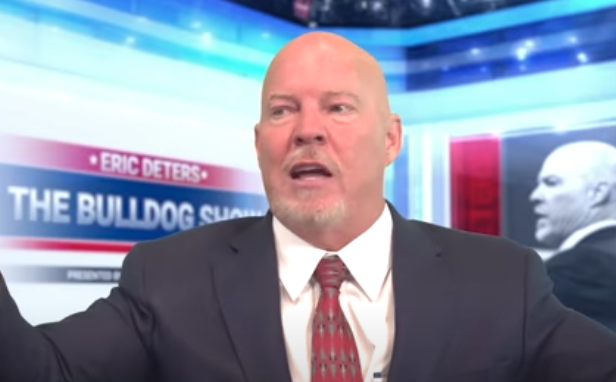 Despite being suspended from practicing law in Kentucky, Trump-loving attorney Eric Deters is representing himself in a suit against Facebook, claiming that the tech company has suppressed his posts.

“I want to stick a microscope up Facebook’s corporate colon,” said Deters in one of his regular rants on his The Bulldog Show YouTube channel.

Deters, who is a conservative of the shouty, scream-y variety, filed the lawsuit in September but it was moved to federal court last week, according to the Lexington Herald Leader.

Deters said in his YouTube announcement about the lawsuit that he knows Facebook is discriminating against him, because he’s not gaining enough followers.

“When Facebook’s not messing with me, my followers, I’m adding followers, like tons of followers,” he said. “Then all of a sudden, I’ve had times where for like six months I’ve hardly had any more followers, and I’ve even decreased. And I’m like, ‘What’s going on here?’”

Deters said the last straw was when Facebook allegedly censored a post for incitement of violence in which he said, “We are kicking their ass,” in reference to lawsuits by health care workers against hospital vaccinate mandates.

Deters said his posts on Facebook are not socially unacceptable, as he claims Facebook sees them. He says his activities on the platform have consisted of posting pictures of “the angels, my grandchildren” and fighting political battles.

A review of one of at least four — yep, four — public Facebook profiles that purport to be Deters, shows recent posts about restoring election integrity and opposing vaccine mandates with many links to Deters’ YouTube channel and website.

Deters also said he has requested class action status for his lawsuit. His list of grievances that he mentioned on his YouTube show includes a claim he did not substantiate that Facebook is doing the bidding of President Joe Biden, removing posts that his administration finds problematic.

Deters’ Kentucky law license is currently suspended due to ethics violations. The Kentucky Supreme Court denied his appeal earlier this year to regain his license, according to the Herald Leader.

The court wrote, “As we understand Deters’ concept of the practice of law, no rules of professional responsibility, no statute, no case law bind him. Deters’ practice of law is not governed by constitution, rule of law or procedure. It is anarchy.”