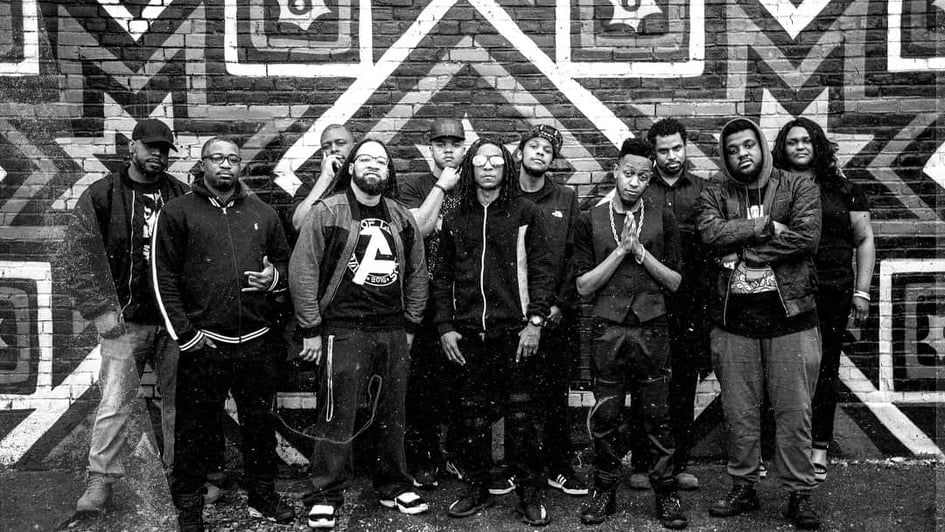 Since forming, Kr8vn8vs Records have carved a remarkable niche of like-minded and talented artists. The mostly-hip-hop-centered label roster includes some of the finest emcees, producers, and musicians in the city, all with something to say. The Kr8vn8vs community has the same energy as the Wu-Tang Clan or Def Jux, independent artists who put their egos aside for the greater good. Like Def Jux, Kr8vn8vs recently released the first in what is hopefully many volumes of their N8VS series, a compilation that highlights the superlative work of all involved. Below, we break down each song in the space we have to shed light on the bigger story of the little label that is.

Opening with an incredible verse by Fiji Waters, The N8VS serves to not only kick things off but to introduce you to the constituent players. The only problem here is the run-time of that track at five minutes, which gives each artist around eight bars or so to get in there and get out. It’s a testament to the strength of everyone involved to stay out of each other’s way while keeping the flow alive through each track. The production from Dom B. is absolutely superlative, kinetic and bouncy but never too busy to get in the way of the emcees.

Right off the bat, the production hits hard, from the horns to the samples. The lead verse here goes to TrapKingKai who comes out swinging over a jazzy beat. Here, the emcee postures in an all too relatable way by celebrating the finer things in life. Picking up the back half, Rmllw2llz dropping references to Sinatra, the Emmys, and boss hog, each representative of style and class in their own way. This is the best party music, a banger that makes you feel a little cooler for having heard it.

With Funkshun, the N8VS dial it back some, passing the mic to the inimitable FuriousFloyd, who has such prowess behind the mic that he seamlessly dropped “je ne sais quois” like it’s no big deal. The overall vibe of the production here is comparably melancholy, although that’s hard to hear at times over a chorus that screams “Fuck 12/Fuck Jail.” It’s an easy and relatable message that speaks to the power of the track: we can commiserate and celebrate together.

Another low-key thinker, “100 Kings” is designed to take you on a journey. Produced by Richard “Filthy” Herrell, there is a gravity to this track that makes it pop. The tempo is a bit slower, giving each emcee a moment to take a breather and contemplate. There are gospel elements here, partially from a chorus by Connor Hildabrand of label-mates Church Friends. In fact, the last half of the song is mellow gold, a laid-back haze that permeates the entire vibe with more than a little religious contemplation here, whether that’s literal or figurative.

The core subject of “38 Missed Calls” is the value of time. Emcees Q-Mystik and TrapKingKai both spit verses on the matter through the lens of dating and intimacy, specifically in how much of their time they are willing to spend on developing what might otherwise be a casual relationship. There is nothing wrong with that as long as everyone knows what’s up, although as the title implies that isn’t always the case. As such, that conversation about time becomes one equally about boundaries, in establishing what you can or can’t commit to.

With “Dodging Raindrops,” the comp picks up the pace, while also offering an interesting counterpoint to “38 Missed Calls.” Where the previous song measured the virtues of casual intimacy, “Dodging Raindrops” is all about overcoming obstacles to get to your person. The amazing Fiji Waters kicks this off with her excellent vocal hooks, promising that she’s “dodging raindrops to make it to you.” Emcee Thurgood Bartholomew is a great partner to Fiji here, both in terms of complementing the message and his tone.

Another low-key bop by Q-Mystik, there is a silky coolness to “What R We.” Again, the track opens with an R&B style chorus, here by Rob Lee. Dom B is at peak performance on “What R We,” offering up a verse about not wasting his time on a relationship that isn’t a good fit. That sentiment that time is precious is a recurring theme for the comp, but one that adds a timeless appeal to the overall record.

Straight up: “Backwash” is a fucking bop. FuriousFloyd takes the lead here and blazes a trail that every emcee follows with style. In fact, W.I.P. comes out hot about having put in his 10,000 hours, a nod to his mastery of form that he punctuates with lines like “I’ll splatter your melon like Gallagher.” The basic setup here is one of the most joyous topics in hip-hop: we’re fucking awesome. To prove that, producer Lip Beats sets up both emcees for success with a beat that absolutely stomps. You can’t listen to this and not nod along, all the while both emcees are nonstop flex and earning it the whole time.

Another Floyd led track, “Coming Home” has a much more introspective vibe. Here, the featured emcees wax poetic on community, an entirely apt subject for the penultimate track of the album. What is home? For the N8Vs, it’s about finding your people and coming together for a common cause. Meth Wun has some particularly righteous lines that speak to my heart, from referencing inspirations like DMX and T’Challa to casually dropping Buddhism into the conversation.

On “Royale With Cheese,” the N8Vs go out like they came in, celebrating the culture that they’ve built and continue to develop. The track plays into Peter Wesley’s wrestling themes, if only from the showmanship and razzle dazzle of the scene. Serving here as an announcer, Wesley gives everyone the shine they’ve earned as they come into the track which compliments the bombast of the beat. The perfect outro, the N8Vs want you to take a moment to enjoy the best in life, while thinking on it for a bit. And they succeed.

Correction: We mixed up a couple of the producers’ names. Sorry, Lip Beats and Meth Wun. We should have it right now.