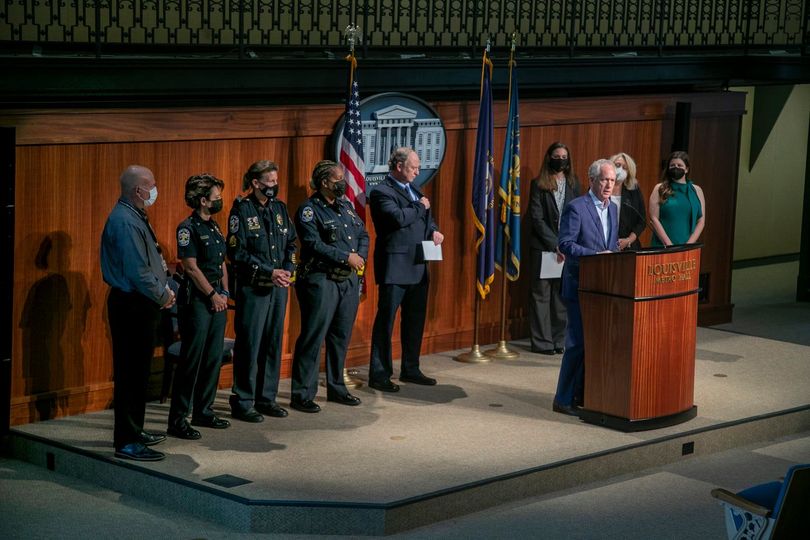 In what he described as the next step in the “reimagining” of public safety in Louisville, Mayor Greg Fischer announced on Wednesday that the city is launching a pilot program to deflect some 911 calls to a non-police response that focuses “on problem solving and de-escalation.”

The program, which will send some 911 calls to trained crisis interventionists, will be piloted in LMPD’s Fourth Division, which has experienced an average of 11.63 crisis and intervention events per day since 2019 — the highest of any division. The Fourth Division covers South Louisville, Old Louisville, Shelby Park, Smoketown, Germantown, Schnitzelburg and several other neighborhoods.

Fischer said the new model “deflects away from criminalizing — or not giving proper assistance to mental health issues” and instead moves “towards putting the right resources in the right place at the right time.”

The move came more than a year after the city said it would explore non-police 911 responses as part of the sweeping reforms announced alongside the $12 million settlement it paid to the family of Breonna Taylor, the 26-year-old Black ER tech who was shot and killed by police in her Louisville apartment in March 2020.

“We have looked at our police as the vehicle to deal with all of society’s problems — and they’re supposed to be able to stand up and address them all,” said Fischer. “So we’ve often failed to deal with a lot of challenges, including working and helping people with behavioral health issues in ways that keep them out of the legal system.”

Developed by a UofL-led research team over the course of seven months, the model will see 911 calls triaged, with call takers at the MetroSafe 911 call center diverting appropriate calls to the trained crisis interventionists. The interventionists would then determine the response: Whether the situation could be handled over the phone, whether a non-police crisis intervention unit should respond in person or whether safety concerns necessitated police also respond.

“We believe that early intervention in times of crisis and the connection with needed supports will result in lower hospitalizations, lower incarcerations and better community outcomes,” said David Weatherby, chief operating officer of Seven Counties Services, which partnered with UofL, the city and Spalding University researching the diversion model. “We know that this work is only beginning, but we are committed to creating a safer and more equitable Louisville.”

The proposed model suggests that the city, UofL and Seven Counties Services collaborate to initially operate the program, with the goal of launching on Dec. 1, 2021.

Initially, the program will run in two eight hour shifts between 10 a.m. and 2 a.m. every day to cover the period when most calls are received.

“We really want to do this right and take our time, because if we do it too fast, that’s when chaos and emergencies increase instead of decrease,” said Susan Buchino, assistant professor at UofL’s School of Public Health and Information Sciences and the assistant director of the UofL’s Commonwealth Institute of Kentucky.

Buchino added that researchers had received advice from other diversion programs across the country to start small. She said community feedback would guide the evolution and growth of the program.

A total of $5 million is devoted to deflection and diversion programs in the city’s fiscal year 2022 budget.

The program also establishes a 24-hour “community respite center” where people in crisis can go to be connected with interventionists, mental health and substance use professionals and other resources.

The community respite center is similar to The Living Room, a program run by the nonprofit Centerstone that was forced to close by budget cuts in 2019.

While the diversion program is a step towards creating community safety and a more equitable Louisville, Buchino said more needs to be done to address the root causes of crises in Louisville.

“Community safety implies that people are thriving and living their best lives with freedom from fear, without violence and without the threat of violence. Violence is preventable. But imposing structural violence to prevent inter-personal violence is not safety,” she said. “Community residents have made it very clear that safety is the availability of needed resources and support. Safety comes in the form of housing, healthcare, living wages and food security. When your basic needs are met and you have the resources you need to solve a problem.”

Mayoral candidate, activist and The Bail Project operations manager Shameka Parrish-Wright hailed the pilot program as a “step forward” in a Facebook comment, but said there is still work to be done in reforming policing and public safety.

“The police are not equipped to handle all of our problems,” she wrote. “That is what got us here. They are an enforcement arm. We have to work together to get [the] community protection we need.”