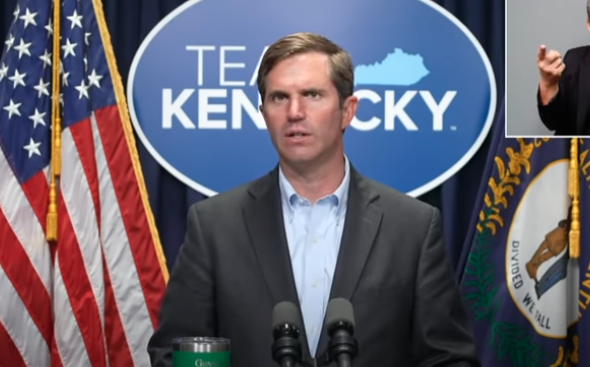 COVID cases, hospitalization and ICU rates are all down in Kentucky. Deaths are still high, but Gov. Andy Beshear noted that those tend to trail the other statistics.

“Just about everything is moving in the right direction,” he said at his presser on Monday, Oct. 18.

Kentucky’s case rates over the last two weeks are now below the highs of last year’s COVID winter and fall surge. The plunge, said Beshear is moving faster than at any other time throughout the course of the pandemic, even when vaccinations started.

Hospitalization rates are also below last year’s peak, with 1,193 Kentuckians currently hospitalized. And, ICU rates, at 337, are also low, which Beshear attributed to vaccination rates, antibody treatments and people who have been infected and recovered.

Kentucky’s COVID positivity rate is now below 8%, which Beshear said is a significant drop.

Ventilator rates in the state are also lower, but they’re the only falling statistic that have not made it below last year’s surge, said Beshear. He attributed that to the Delta variant, which has made Kentuckians sicker than past iterations of the virus.

Over the weekend and on Monday, there were 103 COVID deaths total. Beshear said that those 50 and under continue to die at a higher rate than at any previous moment in the pandemic.

Beshear said that Kentuckians still need to be vigilant, even as rates fall.

“Things are getting better, and that’s good. It’s really good,” he said. “That doesn’t mean that it is safe, and that we’re completely out of the woods, that means we got to still be careful around one another and make sure we’re doing the right things not to spread the virus.”

One of those things, according to Beshear, is continuing universal masking in schools.