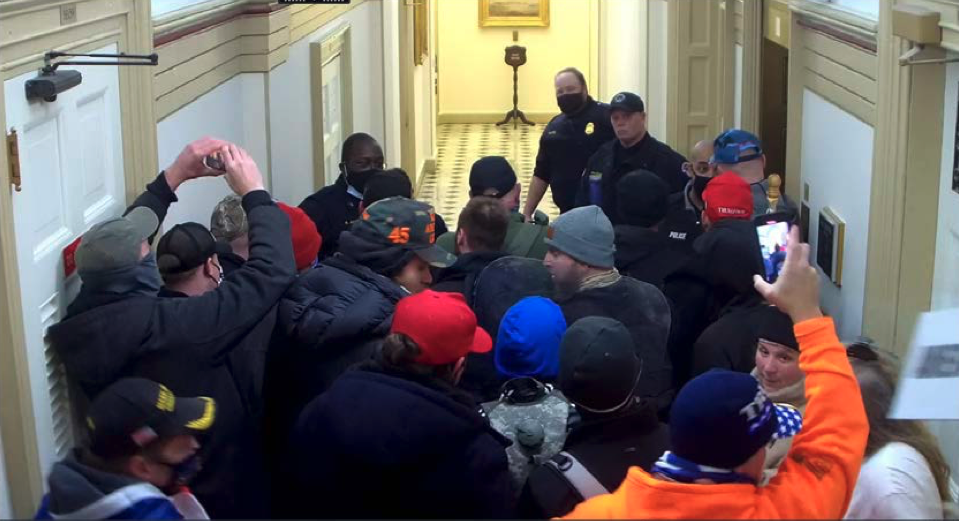 Lori Ann Vinson and her husband Thomas Vinson were among those who entered the U.S. Capitol on Jan. 6. | Photo via U.S. District Court for the District of Columbia.

A Kentucky couple who entered the U.S. Capitol during the failed insurrection on Jan. 6 are getting off without jail time.

That’s not to say they aren’t being punished.

Instead, Lori Ann Vinson and Thomas Roy Vinson of Morganfield, Kentucky, were sentenced on Friday to five years probation and were ordered to pay a fine of $5,000 and $500 in restitution each. They both pled guilty to parading, demonstrating, or picketing in a Capitol building.

According to Courthouse News Service, U.S. District Judge Reggie B. Walton told them, “I know that’s a lot, but I want the sentence to hurt. “People have to understand that if you do something like this, it’s going to hurt.”

In a letter to the court, Lori Ann Vinson wrote that she and her husband are landlords for low-income renters and that they help feed their tenants and take them places, including one tenant with a mental disability who Lori Ann Vinson is a Social Security payee for.

“The reason for this letter is to explain the kind of person I am and to ask for a reprimand that allows me to continue my work with my patients and my tenants that need help. Jail time and home incarnation will not allow these things to happen, and the ones hurt most of all from this will be those people that I am trying to help,” she wrote.

Lori Ann Vinson and Thomas Roy Vinson said in court documents that they traveled to Washington D.C. on Jan. 6 to support then President Donald Trump. They attended the Stop to Steal rally, which was organized by people who wanted the 2020 election results naming Joe Biden as president to be overturned.

Lori Ann Vinson told 44 News in Evansville that she and her husband were never asked to leave the U.S. Capitol when they entered on Jan. 6, and if they had met any resistance, they wouldn’t have entered.

Vinson provided video to a different news station, Fox 17 in Nashville, taken from inside the Capitol, depicting sirens blaring.

Security camera footage that the FBI included in court documents also show her near the front of a crowd of people in the Capitol’s crypt, being held back by police officers. Court documents provided by Vinson’s lawyers say she left the scene before an officer was assaulted.

Vinson was fired from her job as a nurse at St. Vincent’s Health Center after the Capitol riot. She gave interviews to the media saying that she did not regret her actions.

“People have asked, ‘Are you sorry that you done that?’ — absolutely I am not, I am not sorry for that, I would do it again tomorrow,” she told 44 News, according to the FBI. “I felt like I’ve done nothing wrong and I wouldn’t change it.”

In her letter to the court, Vinson wrote that she regretted her statements to the media.

“When I made them I was angry for losing my job,” she wrote. “When I said my actions were justified and I would do it again tomorrow, it was a reaction to my job loss. Also, I did not mean that any of the violence was justified or that I would go into the Capitol again. I mean that I would protest again. I do not agree with or support the violence that day. Now, I do not even want to participate in any protests.”