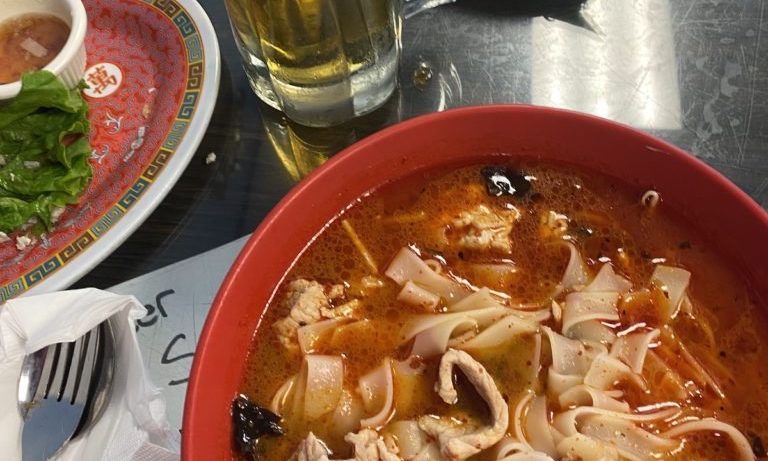 A2 + K6 + beer At Vietnam Kitchen
Blessed by the food gods, it’s hard to have a bad meal in Louisville. But to pick just one meal? Easy: An A2, a K6 and a few Saigon beers poured into frosty mugs. I understand that other people swear by different Vietnam Kitchen orders though I can’t say I understand why. And in the moments that I’m eating Vietnam Kitchen, I can’t understand why anybody would ever eat anything other than Vietnam Kitchen. As a somewhat recent transplant, my obsession with the spicy red broth of the K6 (real name Hủ tiếu cay Triề u Châu) began during the pandemic, when a ban on in-person dining meant plastic takeout containers and anticipation-filled 15 minute drives back to Schnitzelburg from the South End. Soon, getting an order of A2 (fried egg rolls) and K6 became a weekly habit. And soon, I stopped making lists of new restaurants to try, instead devoting that mental energy to figuring out when I could next get to Vietnam Kitchen again. In June, a panic set in when I learned the restaurant was being put up for sale by its owner. One night that month, we rushed to get there for a late dinner but arrived too late to order anything. Moping in the Iroquois Manor parking lot, I tried thinking of what else I might like to eat that night; I couldn’t think of anything.