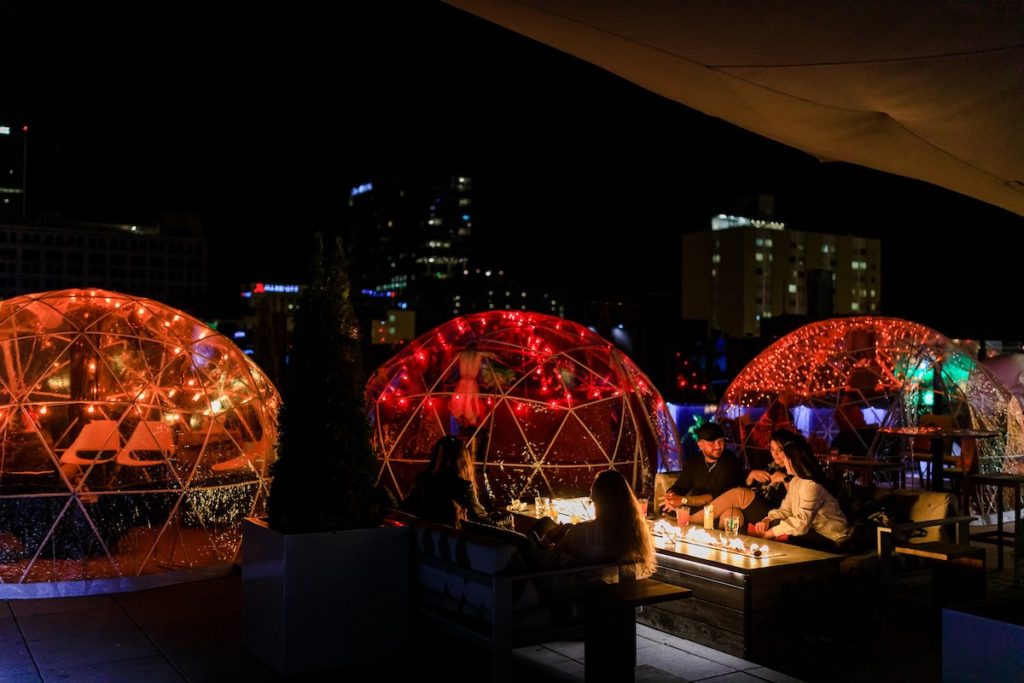 Patio season is almost over. But, igBoo season is just beginning at 8UP Elevated Drinkery & Kitchen in downtown Louisville.

This rooftop restaurant and bar in the Hilton Garden Inn is bringing back its famous “IgLOUs” for the third year in a row. And for the second year, it’s opening them up for Halloween.

You and up to seven of your friends can reserve the two igBoos, which are opening on Friday, Oct. 15. They’re both decorated for the holiday, including one which is inspired by Day of the Dead skeletons.

To stay in an igBoo, you must meet a food and drink minimum, which ranges from $250 to $500 depending on the day and time you book them.

They are heated, but you’ll still probably have to layer up on a cold day, said Dustin Stutzman, the director of sales and marketing for First Hospitality Group, Inc., which operates both the hotel and 8UP.

But, the Halloween themed igBoos are really more of a “preview” for what’s to come at 8UP. 8UP will elevate its igloo game starting in November, when it adds six more to the rooftop and develops special menus for them.

This year, Stutzman says you should expect to see booths tailored to drinks and apps and others well suited for full-fledged steak, chicken and seafood dinners. Each igloo will have a theme. Some might change, but Stutzman expects at least two to make a comeback: a bourbon themed one and a “diamonds and fur” igloo with leather and rhinestone chairs and white furs. 8UP will have a snow machine to set the scene, as well as music.

“Really, this has become a part of who we are,” said Stutzman about 8UP’s IgLOUs, which have been featured on Good Morning America.

You can reserve the igBoos on Open Table.