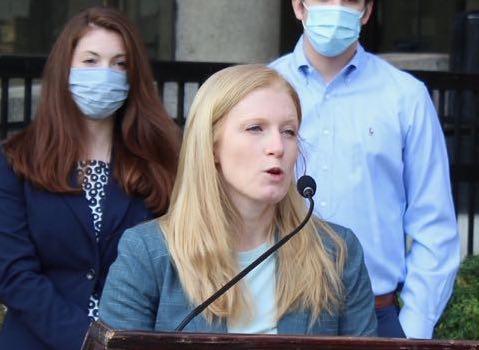 We knew it before we lost Tyree Smith, but his death makes it harder to ignore: the violence in our city is a crisis. Almost 150 Louisvillians, including 20 children, have died from homicide this year; a number that is five times as high as it was 10 years ago. Another 460 people have been victims in non-fatal shootings. If you take a minute to sit with these numbers, names and faces, they are overwhelming.

We know the effects of this crisis are not equally distributed, as evidence shows that violence disproportionately impacts our Black, brown, LGBTQIA and other marginalized neighbors. Let’s follow the leadership of our most impacted communities. Let’s elevate their voices and experiences.

So why are we white women writing to you today? As moms of preschool children, we know that our babies growing up in The Highlands are much more likely to see their high school graduation because of where they live. Every child in Louisville should have that opportunity.

Yes, we have seen a rise of gun violence in our neighborhoods in The Highlands in the past year. It’s a reminder that we are all interconnected in this city. But we also recognize that each incident here has received outsized attention, while many other neighborhoods, predominantly and historically Black and poor, have struggled with violence for far longer, with far less attention and investment. The fact that some media continue to push a narrative about violence in The Highlands, which is the whitest neighborhood in the city, underscores the underinvestment and disinterest with which we treat our neighbors in need.

But the question for our city today is: What do we do about it? Candidly, there aren’t enough elected and appointed leaders asking these questions. We need a public-facing conversation and a community-led plan for action. We aren’t going to accomplish all of that in this short article, and we know that our voices shouldn’t be the loudest on this issue. But we do want to use the resources we have to elevate what we are hearing from impacted communities.

We know the most effective way to address violence is to address its root causes. Poverty’s impact on violence has the deepest and thorniest roots of all. Many markers of poverty — dilapidated structures, crowded households, unemployment, unsafe housing —are strongly correlated with violent crime.

Anti-poverty interventions have to be a part of the solution. Access to universal pre-K decreases violence. Things like access to housing, transportation and economic mobility help as well. If we could wave a wand and eliminate poverty, Louisville would be a much safer (and more just) place.

We also have to invest in solutions that give parents and kids the resources they need. Studies show that home nurse visits for prenatal and postnatal care have a dramatic impact at reducing adverse childhood events. In fact, the kids in these studies were less likely to be involved in crime 15 years later. Another set of studies show that therapeutic interventions — working with kids and families — leads to a host of better outcomes and is cost-effective for society.

But just talking about upstream policies isn’t enough right now. Upstream interventions, by definition, take years to flow down and have an impact. We don’t have that kind of time; kids are getting shot right now.

You probably think that this is where we pivot to make a police-on-every-corner argument. Don’t worry; we aren’t going there. We don’t think that adding a police officer to every corner is the solution. In fact, data supports that many “tough on crime” interventions — for example, moving juveniles to adult court — actually leads to more crime. Children in the adult criminal justice system are also eight times as likely to die by suicide and five times more likely to be sexually assaulted.

Of course, practically speaking, police-based interventions aren’t even a possibility right now. Our police department has 300 fewer officers than its allotted capacity, representing a 23% reduction from its full staffing level. That isn’t going to change anytime soon, as it takes almost a year for a new officer who enters the academy to complete the training requirements. That means that we have no choice but to look at non-police solutions.

So what are those solutions — those immediate things we can do today to meaningfully impact violence in the short term? One data-driven idea is to immediately and significantly invest in our marginalized communities. Studies show that built environment changes — like mowing vacant lots and investing in home repairs — can reduce violent crime and assaults.

And listen to the community’s leaders and the residents of neighborhoods most impacted by gun violence: they are asking for that investment. More street lights, more attention to vacant and abandoned properties, more places for families to bring their children in the neighborhood, more public events in neighborhoods to give neighbors a chance to meet each other in a safe, supported space. More community centers for kids to go to during out of school time, more access to summer jobs, more educational opportunities. More parks, more grocery stores, more affordable housing. This isn’t about throwing up some landscaping and hoping that it will address violence. It’s about correcting for decades of systemic disinvestment in neighborhoods and people.

We also must continue the work being done by our city’s Office for Safe and Healthy Neighborhoods. This department is doing some of the most important and impactful work, including organizing community events and responding to gun violence. That department’s Ambassador Program trains people on the CDC Public Health Approach to violence, community organizing, suicide prevention and conflict resolution. Everyone reading this article should go to the webpage and sign up for the training.

At the end of the day, all of this boils down to building community and supporting it. We have to create spaces to build relationships and empower individuals.

We are lucky that we have tools to do this in an unprecedented way, as we have $350 million American Rescue Plan dollars that we can spend to invest in both upstream and more immediate interventions. With the right political will, we can choose to spend money on data-driven solutions like the ones we’ve talked about here.

It sounds trite to say that this is a problem that will take all of us to solve. But my colleague Councilman Jecorey Arthur said it best: “everyone in Louisville is responsible for Louisville.” We are tired of the inaction and finger-pointing. Let’s work together to get something done.