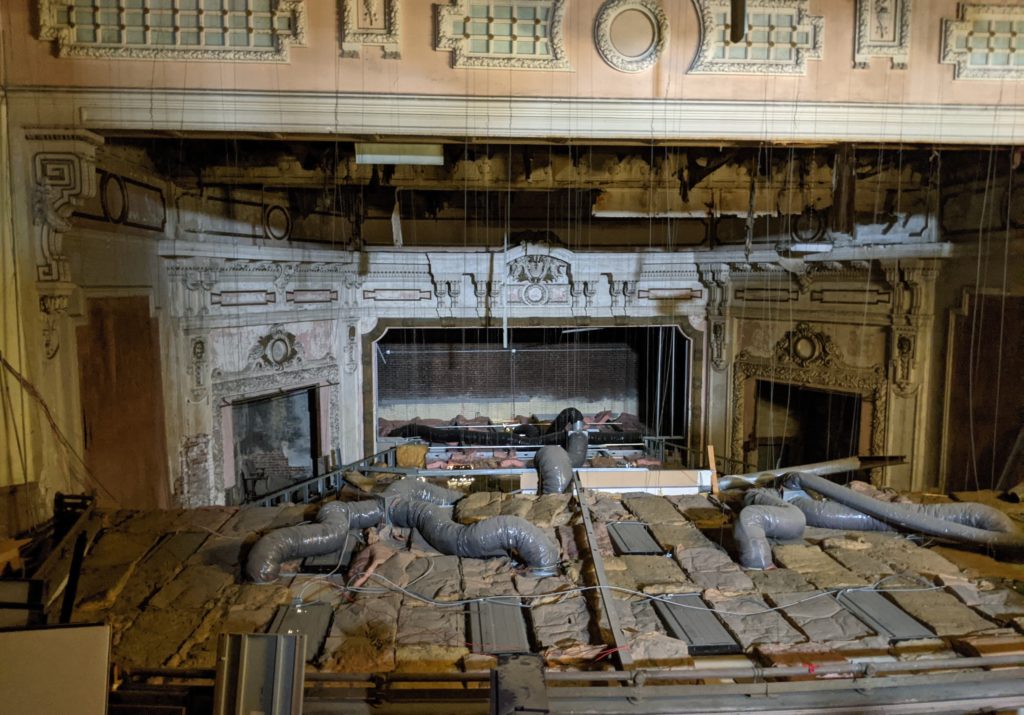 What remains of Broadway Theatre | Photo by Kevin Gibson

[Editor’s Note: The following is an excerpt from “This Used to Be Louisville,” a new book by Kevin Gibson that tells the stories of some of Louisville’s most fascinating historical buildings. It is available on Amazon and at bookstores such as Carmichael’s. The retail price is $22.50.]

It Will Always Be ‘The Old Sears Building’

While there were several former Sears, Roebuck & Co. locations in Louisville, including a well-known one at Eighth and Broadway, there’s at least one that seemingly everyone knows in general terms as “the old Sears Building.” Of course, it hasn’t been a Sears store in decades.

The two-story building first opened its doors to customers in late 1959 and was a modern destination for shopping because, as you may remember, Sears was where America used to shop for items like paint, window fans, and bedding. (I remember my grandmother would order from the Sears catalog over the phone and, a week or two later when she received a call from Sears that her order had arrived, would get dressed up to go pick up her new draperies or bath towels. It was a big deal to go to Sears back in the day.)

The 113,800-square-foot building originally cost a cool $2 million to build, which isn’t chicken feed now and sure as heck wasn’t in the late ’50s. But the massive parking lots accommodated 700-plus cars, and a Sears spokesman in 1958 assured local media that the facility would offer “the latest in store architecture and design.”

Adjacent Theiman Lane was widened and divided, and traffic lights, which still exist, were added at Shelbyville Road to handle the resulting traffic increase. Of course, if you go back into the 1800s, this part of town, which is now mostly shopping, restaurants and other commercial property, was part of a larger agricultural operation known as the St. Matthews Produce Exchange. As it happens, Louisville was the second-leading producer and distributor of potatoes and onions well into the 1900s, and it all went down in St. Matthews. Eat your heart out, Idaho.

Sears eventually moved its St. Matthews operation east in 1984 to a two-story space in Oxmoor Center; after that, the former location became a revolving door of businesses, from a home improvement store to a Steepleton billiards and game store. Today, “the old Sears Building” is the home to many businesses, from a Dollar Tree to a laser tag room. In the hearts of St. Matthews residents, however, the building has only one proper heritage.

Who is This ‘Alberta Stoll’?

Most Louisvillians are familiar with the Silver Dollar, the bourbon-bar-meets-honky-tonk in Clifton that used to be a fire station. But how much do most of us really know about the building’s history? Not a lot.

One of the oldest intact firehouses in the US, the building was constructed in 1890 and originally was established for Louisville’s Hook and Ladder Co. No. 3. That weird inscription on the front that most pronounce “Alberta Stoll?” That’s actually in tribute to Albert A. Stoll, a lawyer and former Louisville alderman who originally was born in Philadelphia.

When Stoll was young, his family, which was from Germany, moved to Louisville, where he was educated and graduated high school in 1870. As a young man, he went into politics, was a city alderman for many years, and earned a reputation as an honest official. The book “The History of Kentucky” says of Stoll, “His record has always been for a clean government, and against jobbery and monopolies, for which he has won the confidence and sympathy of the people.” (We could use more politicians like him, right?)

The building, meanwhile, originally had a tower built into it, and served a hook-and-ladder firefighting team that worked with horses and carriages pulling steam pumpers in order to fight fires. It’s also believed the tower was used as sort of a lookout point for spotting fires, perhaps a boost to primitive alarm systems.

The nameplate tribute on the firehouse facade apparently was a nod to Stoll’s ongoing service to the city, and it could be speculated that he was instrumental in securing funding for the firehouse. Despite Stoll’s contributions to his city, people still continue to mispronounce his name. Next time you stop in at the Silver Dollar, down a whiskey in Albert’s good honor.

Give Your Regards to Broadway (Theatre)

In Louisville, as in so many American cities, the early part of the 20th century saw a boom of theaters that alternated between showing films and hosting live entertainment. They became neighborhood hubs of entertainment and socialization, which naturally made them beloved in their time.

Broadway Theatre in the eastern half of Broadway, within walking distance of several neighborhoods, is one I have heard about often from my father. He and his friends would walk from his grandmother’s Germantown house in the 1950s, stop at the local ice company for a chunk of ice (the theater wasn’t air-conditioned, and Louisville summers were hot), and then sneak the ice into the movie to keep cool. Sometimes water was flicked. At times, pea shooters were employed. Sometimes, they got kicked out before the movie was over. But they always had fun, because it was the local theater and they were kids.

Built in 1915, the grand theater actually replaced an earlier, much smaller version that seated about 300. Remodeled and rebuilt after a fire, the expanded Broadway Theatre came closer to seating 800, and that version, which still exists, originally hosted traditional theater, vaudeville, burlesque, and of course, films. For a time, it hosted radio performances by Gene Autry, who would go on to country-western music fame.

It would change hands over the years, being renamed the Guild Theatre in 1960, then becoming a rock music venue called the Mad Hatter in 1969, where artists such as Ozzy Osbourne, Black Sabbath and Pink Floyd performed. In 1981, it was converted to a showroom for Office Resources Inc. (ORI), an office furniture company. ORI moved its showroom and offices in 2018, after which Launch Louisville, a co-working space that hosts many small businesses, took over.

If you get a chance to look inside, take that chance. I arranged a quick tour through Launch Louisville and was delighted to see the ticket office still on full display in the lobby. Walking into the theater’s shell through a balcony door, I felt as though I had walked into a mirror and emerged 100 years in the past. Box seats and the stage are clearly visible in all their glory, and at the top of the balcony the projection booth still holds two 100-year-old projectors, still aimed at the stage, frozen in time. I never wanted to leave.