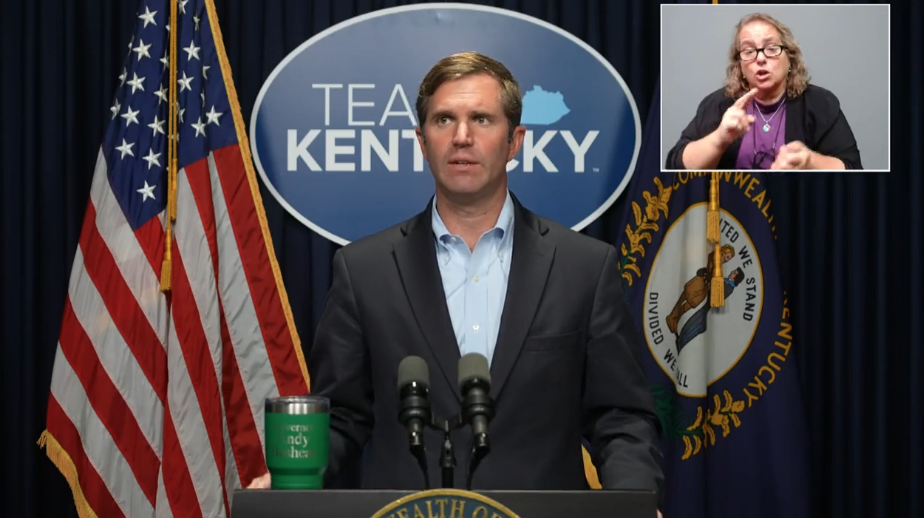 The delta variant-fueled surge is pushing hospitals to their limits, and at a press conference on Monday, Gov. Andy Beshear said that it hit a peak this weekend.

Saturday was the worst day for Kentucky hospital shortages during the pandemic, with 77%  of hospitals reporting critical staff shortages, he said, although it fell to 63% on Monday.

“Their heroism now isn’t just about courage, it’s about resiliency,” Beshear said about medical workers. “The least we can do is get a vaccine or wear a mask to try to help these individuals just a little bit.”

The governor also said that Kentucky has not received enough FEMA strike teams, which have been assisting hospitals across the country with COVID response. Some of the state’s hospitals have requested strike teams and were turned down, but Beshear said he hopes more our on the way.

“This happened right when the hurricane hit, when we were supposed to get them — that may have impacted the availability of the strike teams but they were also south of us, where they were hit harder earlier,” he said. “So, we may see these strike teams kind of migrate north as they are freed up so we hope we will see more.”

When asked about the possibility of a one-day special session to address the hospital shortages, an idea mentioned by Senate President Robert Stivers at a press conference last Friday, Beshear said that no one from the General Assembly has asked to meet with him or presented a plan. He also said that every dollar of the state’s American Rescue Plan Act funds have already been appropriated.

“I can’t call a special session when no one has presented me a plan, and the dollars being suggested don’t exist,” Beshear said. “I think everybody would agree with that. And remember, sometimes a session can cause more harm than it does to help. So, even to the hospital systems, I’d say, ‘Let’s make sure we know something is worth it.’ Because the types of legislation that could potentially come out could be harmful, depending, as well.”

He said the state has been working with hospitals by helping them settle lawsuits, providing reimbursements and using the National Guard.

Last week was the state’s third-highest case week during the pandemic, but it was lower than the previous two. August was the worst month of the pandemic, with more than 100,000 cases reported.

“We certainly hope that maybe this shows that cases aren’t going to continue increasing or certainly not at the rate that they were,” Beshear said. “But, once again, I want to make sure that we don’t view this as good news because a plateau would continue to push our hospitals beyond capacity — far too many cases.”

Between Saturday, Sunday and Monday reports, there were 88 new deaths, including at least two people in their 20s. For Monday, Beshear announced 2,075 new cases, 17 deaths and a positivity rate of 12.18%.

“I never thought I’d read that many names of 20-year-olds that have passed away in our communities — those are kids,” Beshear said. “I know I wouldn’t have liked being called a kid in my 20s, but I was, so let’s make sure we’re doing what’s required to protect them as well, and if you are in that 12 to 29 group, especially, please get vaccinated, it’s starting to hit you too.”