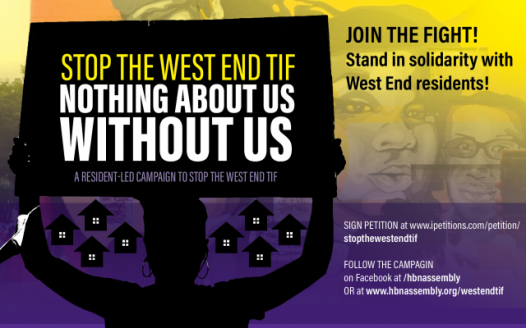 Out of fear that a West End tax increment financing, or TIF, district will gentrify that part of the city, Louisville’s Historically Black Neighborhood Assembly has launched a campaign against the project.

The TIF district was authorized by the Kentucky General Assembly earlier this year in what advocates called an attempt to economically revitalize a part of the city that has been historically underserved. A TIF district encourages “economic development” projects by funneling tax dollars to them. The tax money is captured as property values go up in an area. In the West End TIF’s case, 80% of any property value growth will go to such projects over the next 20 years.

The Historically Black Neighborhood Assembly opposes these taxes going to developers rather than libraries and underfunded neighborhood schools.

The group, which was founded by the Smoketown Neighborhood Association’s Housing & Tenants’ Rights Committee and Books & Breakfast Louisville, says Metro government has the power to stop the TIF via two routes:

HBN is asking for the $10 million to go, instead, to developing “quality housing in the West End that is affordable for households making at or below $35,000 annual median income (roughly 30% AMI) or to fund the Historically Black Neighborhood Community Land Trust Plan.”

The West End Opportunity Partnership is currently collecting millions more in seed money for the TIF from private sources, according to the Courier Journal. It’s supposed to also receive $10 million each from the state and Metro government.

You can sign a petition in support of HBN’s campaign here.